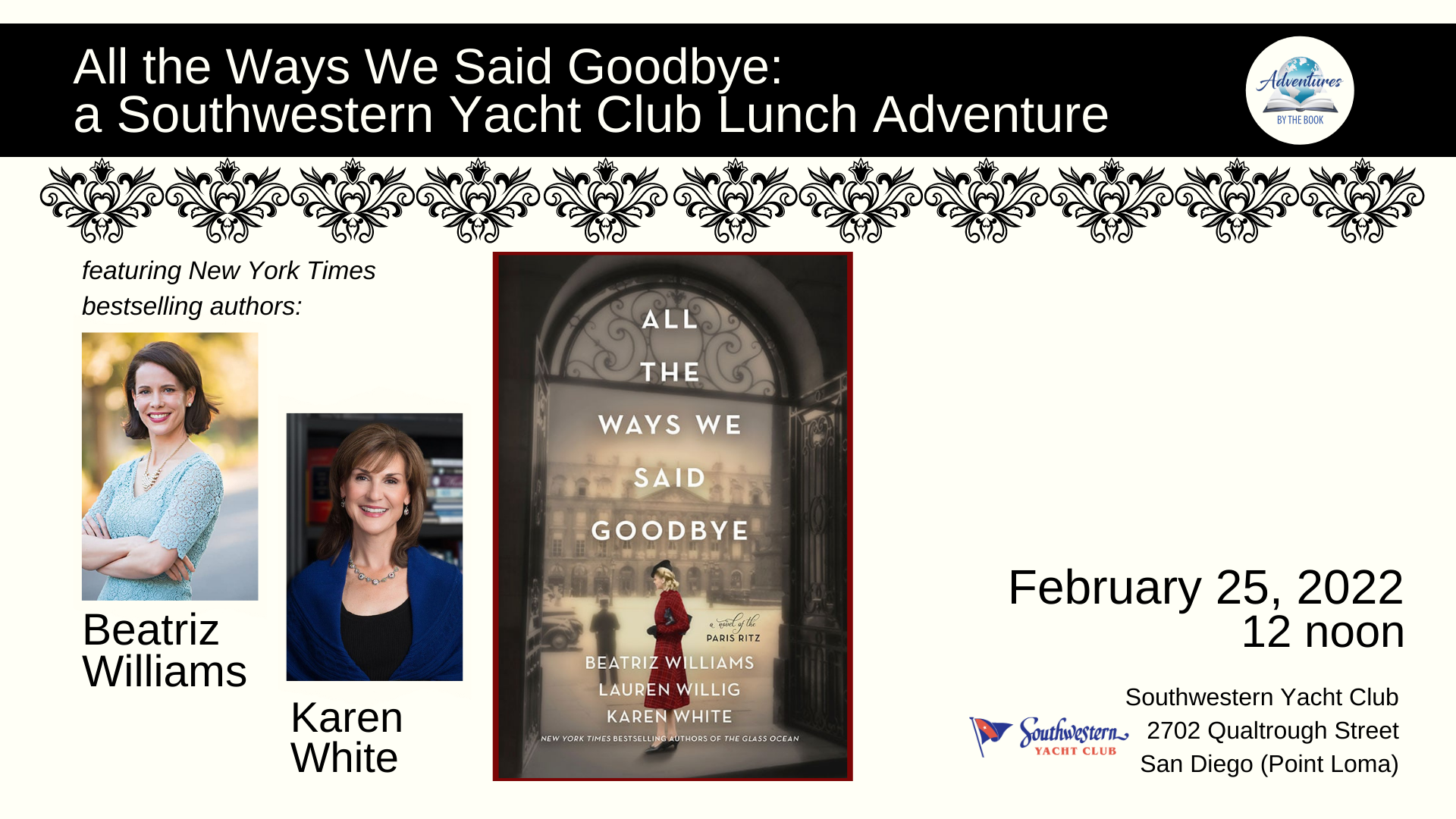 It’s time to sail forward with our 2022 Adventures by the Book live and in-person events, and we couldn’t be more thrilled to set course with the second in our exciting new author series to be held at the esteemed Southwestern Yacht Club.

The New York Times bestselling authors of The Glass Ocean and The Forgotten Room return with a glorious historical adventure that moves from the dark days of two World Wars to the turbulent years of the 1960s. You won’t want to miss this opportunity to have lunch at the esteemed Southwestern Yacht Club in the beautiful Point Loma residential area within the Shelter Island Yacht Basin with NYT bestselling authors Karen White and Beatriz Williams as they discuss their novel, All the Ways We Said Goodbye.

Your Adventure includes a paperback copy of All the Ways We Said Goodbye to be delivered and signed at the event, lunch, beverage, tax, gratuity, and the opportunity to meet Karen and Beatriz live and in-person. 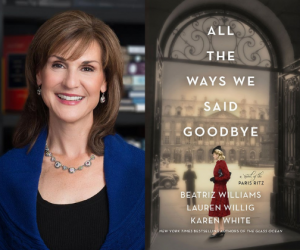 Karen White is the New York Times and USA Today bestselling author of 29 books, including the Tradd Street series, The Last Night in London, Dreams of Falling, The Night the Lights Went Out, Flight Patterns, The Sound of Glass, and A Long Time Gone. She is the co-author of All the Ways We Said Goodbye, The Glass Ocean and The Forgotten Room with New York Times bestselling authors Beatriz Williams and Lauren Willig.

She grew up in London but now lives with her husband near Atlanta, Georgia. 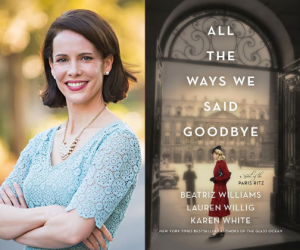 Beatriz Williams is the New York Times, USA Today, and internationally bestselling author of Our Woman in Moscow, The Summer Wives, Her Last Flight, The Golden Hour, The Secret Life of Violet Grant, A Hundred Summers, and several other works of historical fiction, including three novels in collaboration with fellow bestselling authors Karen White and Lauren Willig.

A graduate of Stanford University with an MBA in Finance from Columbia University, Beatriz worked as a communications and corporate strategy consultant in New York and London before she turned her attention to writing novels that combine her passion for history with an obsessive devotion to voice and characterization. Beatriz’s books have won numerous awards, have been translated into more than a dozen languages, and appear regularly in bestseller lists around the world.

Born in Seattle, Washington, Beatriz now lives near the Connecticut shore with her husband and four children, where she divides her time between writing and laundry.

In All the Ways We Said Goodbye, three women’s fates are joined by one splendid hotel…

France, 1914. As war breaks out, Aurelie becomes trapped on the wrong side of the front with her father, Comte Sigismund de Courcelles. When the Germans move into their family’s ancestral estate, using it as their headquarters, Aurelie discovers she knows the German Major’s aide de camp, Maximilian Von Sternburg. She and the dashing young officer first met during Aurelie’s debutante days in Paris. Despite their conflicting loyalties, Aurelie and Max’s friendship soon deepens into love, but betrayal will shatter them both, driving Aurelie back to Paris and the Ritz—the home of her estranged American heiress mother, with unexpected consequences.

France, 1942. Raised by her indomitable, free-spirited American grandmother in the glamorous Hotel Ritz, Marguerite “Daisy” Villon remains in Paris with her daughter and husband, a Nazi collaborator, after France falls to Hitler. At first reluctant to put herself and her family at risk to assist her grandmother’s Resistance efforts, Daisy agrees to act as a courier for a skilled English forger known only as Legrand, who creates identity papers for Resistance members and Jewish refugees. But as Daisy is drawn ever deeper into Legrand’s underground network, committing increasingly audacious acts of resistance for the sake of the country—and the man—she holds dear, she uncovers a devastating secret … one that will force her to commit the ultimate betrayal and to confront at last the shocking circumstances of her own family history.

France, 1964. For Barbara “Babs” Langford, her husband, Kit, was the love of her life. Yet their marriage was haunted by a mysterious woman known only as La Fleur. On Kit’s death, American lawyer Andrew “Drew” Bowdoin appears at her door. Hired to find a Resistance fighter-turned traitor known as “La Fleur,” the investigation has led to Kit Langford. Curious to know more about the enigmatic La Fleur, Babs joins Drew in his search, a journey of discovery that takes them to Paris and the Ritz—and to unexpected places of the heart….