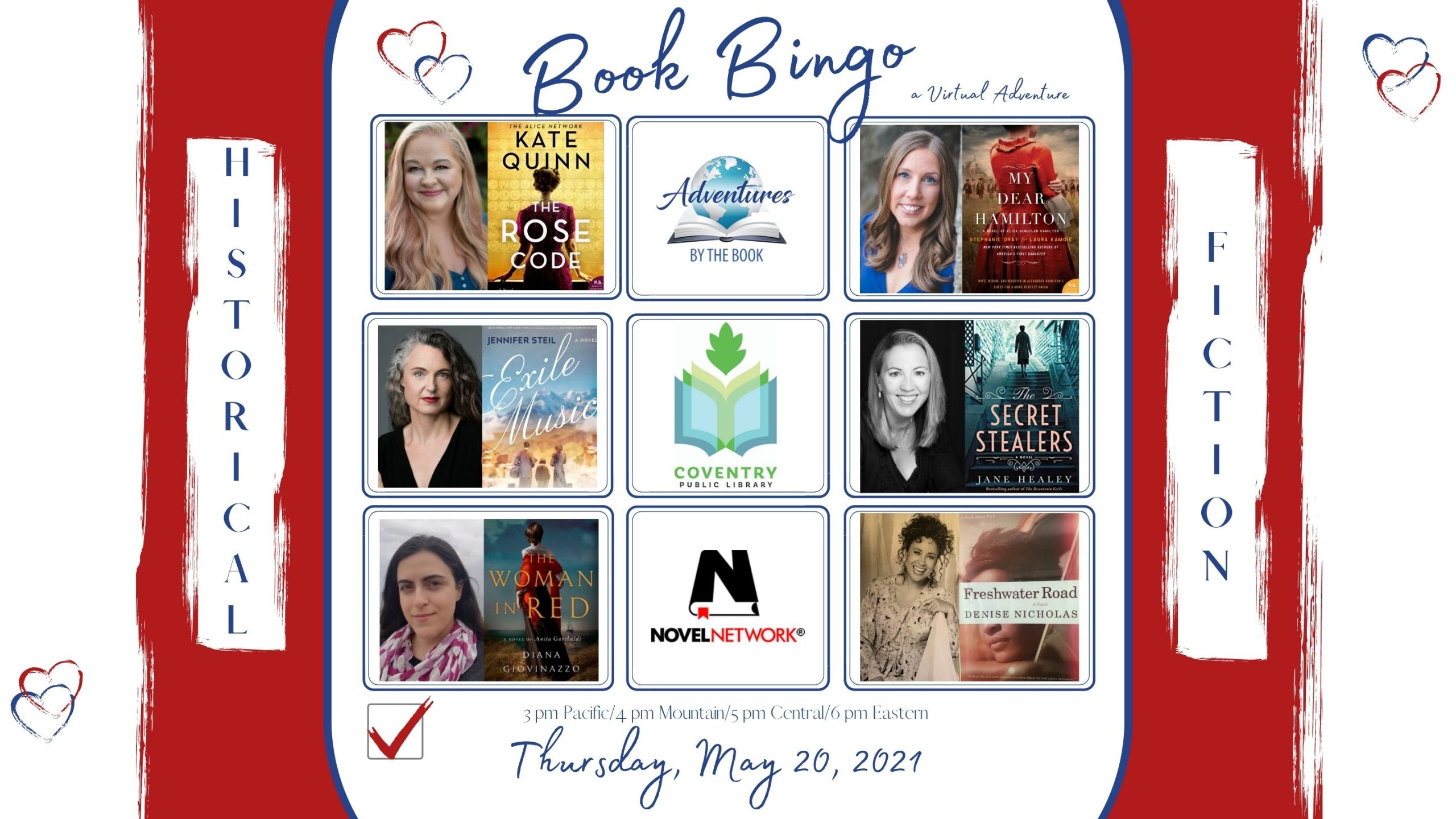 We are pleased to partner with the Coventry (Rhode Island) Public Library for another fun Book Bingo (Historical Fiction): A Virtual Adventure! If you are already familiar with our popular Southern California series that features NovelNetwork® authors, you will understand why we receive so many requests to expand the program nationwide. Pivoting to virtual events has made this not only possible, but offers up fun opportunities for exciting partnerships, participation by more of our over 125 book club favorite authors, and space to accommodate many more readers!

Just in time for Memorial Day, this free event features presentations by book club favorite historical fiction authors: Diana Giovinazzo, Jane Healey, Laura Kamoie, Denise Nicholas, Kate Quinn, and Jennifer Steil, an interactive virtual game of bingo, and fun prizes, and all you have to do is show up (and why not invite your book club friends and fellow readers to join in as well) to learn about great new reads to add to your to be read list). 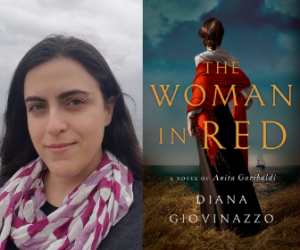 Diana Giovinazzo is a self-proclaimed history nerd with an insatiable wanderlust. As an Italian girl from Upstate New York with a passion for historical fiction and genealogy, she is also the co-host of the literary podcast, Wine, Women and Words.

At once an exhilarating adventure and an unforgettable love story, Diana’s first novel, The Woman in Red is a sweeping, illuminating tale of the feminist icon who became one of the most revered historical figures of South America and Italy. Destiny toys with us all, but Anita Garibaldi is a force to be reckoned with. Forced into marriage at a young age, Anita feels trapped in a union she does not want. But when she meets the leader of the Brazilian resistance, Giuseppe Garibaldi, in 1839, everything changes. Swept into a passionate affair with the idolized mercenary, Anita’s life is suddenly consumed by the plight to liberate Southern Brazil from Portugal — a struggle that would cost thousands of lives and span almost ten bloody years. Little did she know that this first taste of revolution would lead her to cross oceans, traverse continents, and alter the course of her entire life — and the world.

To schedule a book club visit with Diana or any of our authors on NovelNetwork: 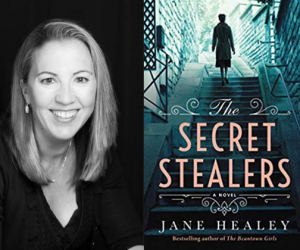 Jane Healey left a career in high tech after her daughters were born to become a freelance writer. Her passion for historical fiction became her new career when her first novel, The Saturday Evening Girls Club, was published  in 2017. With the release of The Beantown Girls in 2019, she continued to fulfill her dream of writing lesser known stories of women in history. Janes lives outside of Boston with her two teen daughters, two “idiotic” cats and her husband. She enjoys reading, running, cooking, going to the beach and drinking lots of coffee.

Her new historical novel, The Secret Stealers, is based on the true stories of the women of the Office of Strategic Services, the precursor to the CIA, during World War II. Anna Cavanaugh dreamed of a worthy, adventurous life. Instead, the restless young widow and brilliant linguist teaches French at an all-girls school in Washington, D.C. Everything changes when she’s recruited into the Office of Strategic Services by a family friend and legendary WWI hero.

To schedule a book club visit with Jane or any of our authors on NovelNetwork: 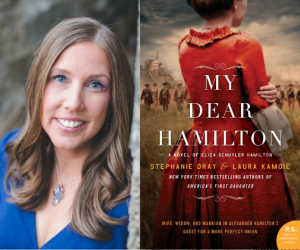 Laura Kamoie is a Wall Street Journal, New York Times and USA Today bestselling autor who has always been fascinated by the people, stories and physical presence of the past. She holds a doctoral degree in early American history from The College of William and Mary, published two non-fiction books on early America, and most recently held the position of Associate Professor of History at the U.S. Naval Academy before transitioning to a full-time career writing genre fiction as the New York Times bestselling author, Laura Kaye. Laura lives among the colonial charm of Annapolis, Maryland with her husband, two daughters, and a monster German shepherd, Schuyler.

In her most recent historical novel, My Dear Hamilton, is the epic story of Eliza Schuyler Hamilton–a revolutionary woman who, like her new nation, struggled to define herself in the wake of war, betrayal, and tragedy. Haunting, moving, and beautifully written, Dray and Kamoie used thousands of letters and original sources to tell Eliza’s story as it’s never been told before–not just as the wronged wife at the center of a political sex scandal–but also as a founding mother who shaped an American legacy in her own right.

To schedule a book club visit with Laura or any of our authors on NovelNetwork:

Denise Nicholas is an accomplished actress and authors an actress, who has been applauded for her portrayals of complex, resilient women on film, television and the stage, most memorably for her ground-breaking, starring role as high school guidance counselor Liz McIntyre on the ABC comedy-drama, “Room 222” and for her co-starring role as Councilwoman Harriet DeLong on the drama series, “In the Heat of the Night” opposite the late Carroll O’ Connor. Along the way, she has garnered three Golden Globe nominations and won three NAACP Image Awards, and is the recipient of two Los Angeles Emmy Awards for co-producing and performing in the PBS Special, “Voices of My People: in Celebration of Black Poetry.” For the last three years, Ms. Nicholas has been a participant in the Sacramento Black Book Fair, as author and as writing teacher.

Her novel, Freshwater Road, lauded by Publisher’s Weekly with a coveted starred review, now available as a ten-year anniversary reissue, is a powerful and dramatic coming of age story set in Mississippi during the Freedom Summer of 1964. Freshwater Road has been called one of the best novels written about the Civil Rights Movement, and Nicholas herself has been praised repeatedly over the years for her beautiful prose and is continually mentioned along with Alice Walker and Ernest J. Gaines as the most important novelists documenting this era.

To schedule a book club visit with Denise or any of our authors on NovelNetwork: 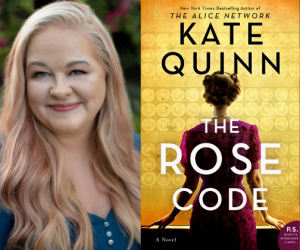 Kate Quinn is the New York Times and international bestselling author of the historical novels The Alice Network and The Huntress. A native of southern California, she attended Boston University where she earned a Bachelor’s and Master’s degree in Classical Voice. She has written four novels in the Empress of Rome Saga, and two books in the Italian Renaissance, before turning to the 20th century. All have been translated into multiple languages. Kate and her husband live in San Diego with three rescue dogs.

In her new book, The Rose Code, Kate returns with another heart-stopping World War II story of three female code breakers at Bletchley Park and the spy they must root out after the war is over. A beautiful blue-blooded debutante, a tart-tongued London shop-girl, and a shy crossword-solving spinster join the war against Nazi Germany as codebreakers of Bletchley Park, only to find that the real puzzle lies inside the Park itself as a traitor sets them against each other in a betrayal reaching past the end of the war.

To schedule a book club visit with Kate or any of our authors on NovelNetwork: 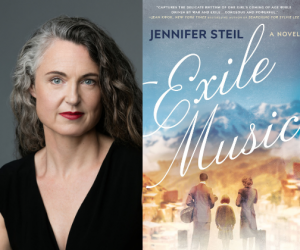 Jennifer Steil is an award-winning author and journalist who lives in many countries (currently Uzbekistan). Her novel, The Ambassador’s Wife, won the 2013 William Faulkner-William Wisdom Creative Writing Competition Best Novel award and the 2016 Phillip McMath Post Publication Book Award and was shortlisted for both the Bisexual Book Award and the Lascaux Novel Award, and has received considerable critical acclaim, notably in the Seattle Times, Publishers Weekly, Booklist, and The New York Times Book Review. The Mark Gordon Company optioned the film rights to The Ambassador’s Wife, with plans to create a television miniseries starring Oscar-winner Anne Hathaway. A bisexual writer who has lived in Arabia and South America for nearly a decade, she is interested in transcultural issues, freedom of expression, and human rights.

Her third book, the novel Exile Music, is based on an unexplored slice of World War II history and follows the lives of a family of Austrian Jewish musicians who seek refuge from the Nazis in Bolivia in 1938.

Are you in a book club, library reading group, or is your group of friends, colleagues, family members seeking fabulous authors who are excited and available to meet with you? Then you will be delighted to know that Diana Giovinazzo, Jane Healey, Laura Kamoie, Denise Nicholas, Kate Quinn, and Jennifer Steil are all members of our wonderful community of over 125 NovelNetwork authors available to meet with small groups via video chat.

To schedule a visit with Diana, Jane, Laura, Denise, Kate, Jennifer or any of our authors, join FOR FREE  here.

This event is free and open to the public (on a first-come, first-served basis); however, registration thru the Coventry (Rhode Island) Public Library (click here) is necessary in order to receive your Zoom invite and your virtual bingo card .  Ticket options below are for book sales only and do not guarantee your space at the event until you register with the Coventry Public Library.

While the event is free, your purchase of a book(s) below offers support to these authors whose book tours and events have been cancelled. Book prices below include shipping within the U.S. and will include signed bookplates.

Please note that only one registration per email address is offered, so if you have friends or family who also wish to play book bingo with us, make sure to have them register with their own email address so they won’t miss out on the fun! 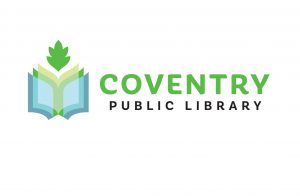