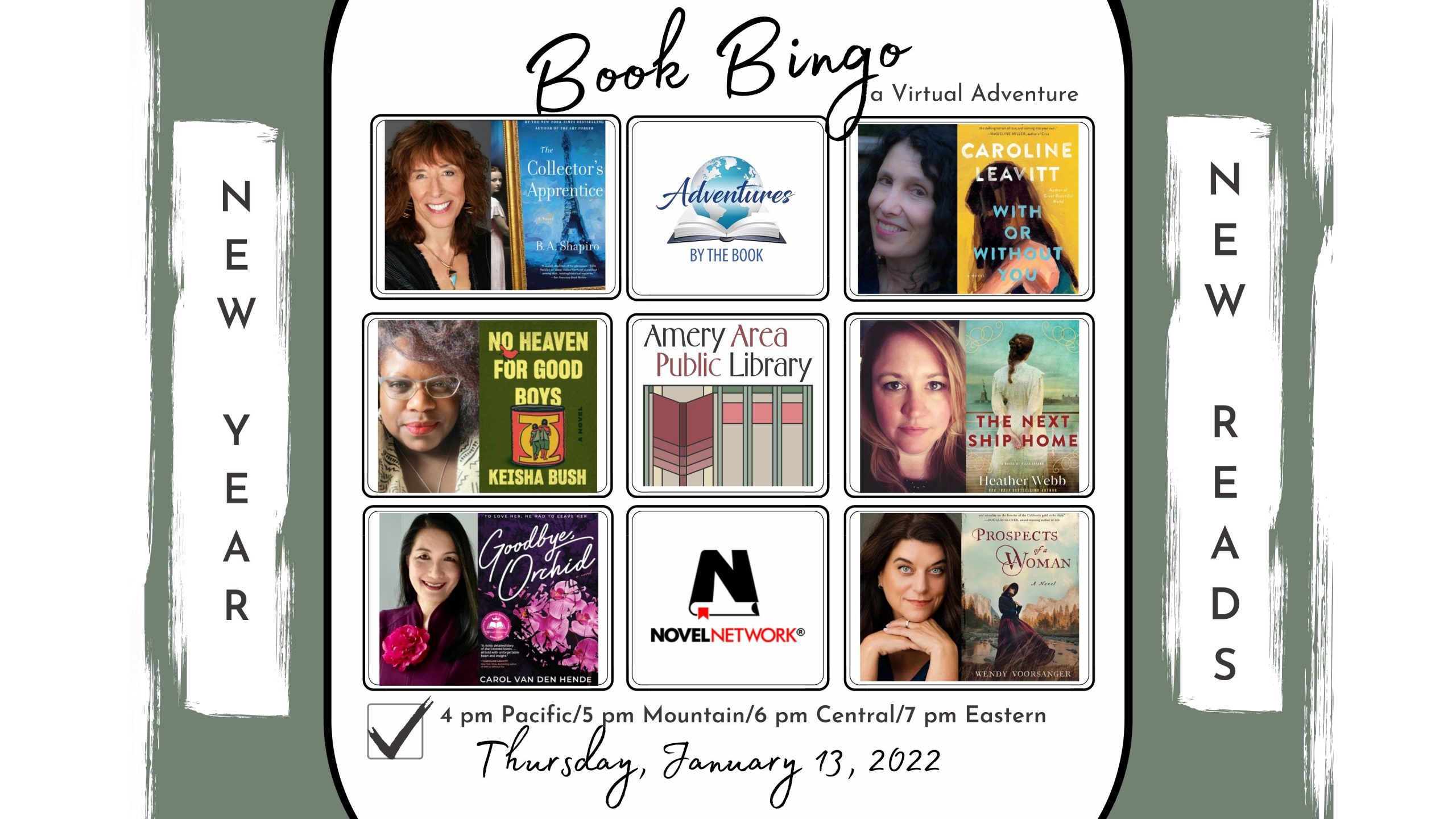 We are pleased to announce another fun Book Bingo (New Year, New Reads): A Virtual Adventure, in partnership with Amery Area (Wisconsin) Public Library! If you are already familiar with our popular Southern California series that features NovelNetwork® authors, you will understand why we receive so many requests to expand the program nationwide. Pivoting to virtual events has made this not only possible, but offers up fun opportunities for exciting partnerships, participation by more of our over 150 book club favorite authors, and space to accommodate many more readers!

It’s a new year, the perfect time to discover new authors or new books to add to your to-be-read list! This free event features presentations by book club favorite authors: B.A. Shapiro, Keisha Bush, Carol Van Den Hende, Caroline Leavitt, Heather Webb, and Wendy Voorsanger, an interactive virtual game of bingo, and fun prizes. All you have to do is show up (and why not invite your book club friends and fellow readers to join in as well) to learn about these great new reads! 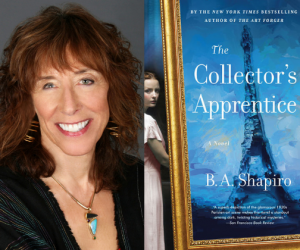 B.A. Shapiro is the award-winning and New York Times bestselling author of nine novels, including Metropolis (May, 2022), The Collector’s Apprentice, The Muralist and The Art Forger, which won the New England Book Award for Fiction, among other honors. Her books have been selected as Community Reads throughout the country and have been translated into over a dozen languages.

Shapiro takes readers to Paris in the 1920s and the ever-fascinating world of Gertrude Stein’s salon and the artists in her latest novel, The Collector’s Apprentice. When she is accused of playing a role in a Ponzi scheme perpetrated by her erstwhile fiancé, Paulien Mertens seeks solace and sanctuary in Paris, where she creates a false identity as a Frenchwoman named Vivienne Gregsby.

As Vivienne attempts to recover her father’s art collection—stolen along with all her family’s assets—and prove her innocence, the eccentric and wealthy American art collector Edwin Bradley offers her a job. She is soon immersed in the world of expatriates and post-Impressionist art, becoming Matisse’s lover, and traveling between Paris and Bradley’s native Philadelphia, where he is building an art museum. But her exciting new life is abruptly interrupted when Vivienne is arrested for Bradley’s murder.

To schedule a book club visit with B.A. Shapiro or any of our authors on NovelNetwork: 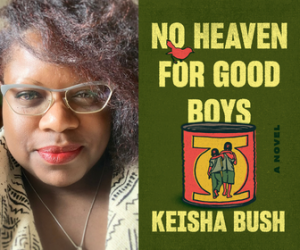 Keisha Bush was born and raised in Boston, Massachusetts. She received her MFA in creative writing from The New School, where she was a Riggio Honors Teaching Fellow and recipient of an NSPE Dean’s Scholarship. After a career in corporate finance and international development that brought her to live in Dakar, Senegal, she decided to focus full-time on her writing. She lives in East Harlem.

Set in Senegal, Keisha’s novel No Heaven for Good Boys is a meditation on the power of love, and the strength that can emerge when we have no other choice but to survive. Six-year-old Ibrahimah loves snatching pastries from his mother’s kitchen, harvesting string beans with his father, and searching for sea glass with his sisters. But when he is approached in his rural village one day by Marabout Ahmed, a seemingly kind stranger and highly regarded teacher, the tides of his life turn forever.

Ibrahimah is sent to the capital city of Dakar to join his cousin Étienne in studying the Koran under Marabout Ahmed for a year, but instead of the days of learning that Ibrahimah’s parents imagine, the young boys, called Talibé, are forced to beg in the streets in order to line their teacher’s pockets. To make it back home, Étienne and Ibrahimah must help each other survive both the dangers posed by their Marabout, and the darker sides of Dakar: threats of black-market organ traders, rival packs of Talibé, and mounting student protest on the streets.

To schedule a book club visit with Keisha or any of our authors on NovelNetwork: 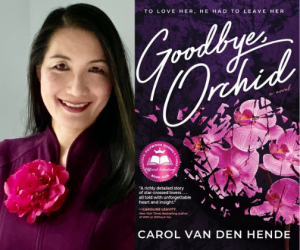 In her novel, Goodbye Orchid, handsome athlete and entrepreneur Phoenix Walker accompanies his love, half-Asian beauty Orchid, to the airport. Neither believes today is goodbye. But after she leaves, disaster strikes. Phoenix wakes in the hospital, broken, forever changed. He longs for Orchid but remembers the tragedy in her past that makes her panic over images of trauma. Now, he’s faced with the hardest decision of his life. Does he burden the woman whose traumatic childhood makes him feel protective of her? Or does true love mean leaving her without explaining why?

Goodbye Orchid is a beautiful book, full of deep, thoughtful truths as well as hard-won wisdom for its protagonists. Their individualized and honest perspectives make the journeys as surprising as they are engaging.

To schedule a book club visit with Carol or any of our authors on NovelNetwork: 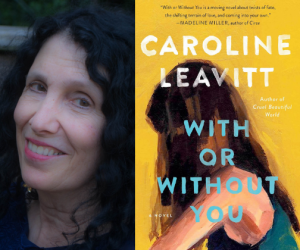 Caroline Leavitt is the New York Times and USA Today bestselling author of Cruel Beautiful World, Is This Tomorrow, Pictures of You, Girls In Trouble, Coming Back To Me, Living Other Lives, Into Thin Air, Family, Jealousies, Lifelines, Meeting Rozzy Halfway. Various titles were optioned for film, translated into different languages, and condensed in magazines.

Unapologetically honest and intimately written, With or Without You is a contemporary story of what happens to relationships as the people in them change, whether slowly or in one cataclysmic swoop. After almost twenty years together, Stella and Simon are starting to run into problems. An up-and-coming rock musician when they first met, Simon has been clinging to dreams of fame even as the possibility of it has grown dimmer, and now that his band might finally be on the brink again, he wants to go on the road, leaving Stella behind.

But when she falls into a coma on the eve of his departure, he has to make a choice between stardom and his wife—and when she wakes a different person, with an incredible artistic talent of her own, the two of them must examine what it is that they really want.

To schedule a book club visit with Caroline or any of our authors on NovelNetwork: 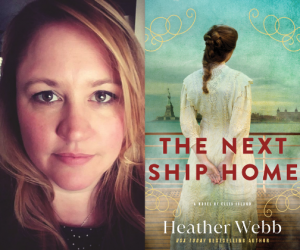 Heather Webb is the USA Today bestselling and award-winning author of seven historical novels. In 2015, Rodin’s Lover was a Goodread’s Top Pick, and in 2018, Last Christmas in Paris won the Women’s Fiction Writers Association STAR Award. Meet Me in Monaco, was selected as a finalist for the 2020 Goldsboro RNA award in the UK, as well as the 2019 Digital Book World’s Fiction prize. To date, Heather’s books have been translated to over a dozen languages.  She lives in New England with her family and one feisty rabbit.

Heather’s novel, The Next Ship Home, is inspired by true events and reveals the dark secrets of Ellis Island as two unlikely friends challenge a corrupt system, altering their fate and the lives of the immigrants that come after them. A young Italian woman arrives on the shores of America, her sights set on a better life. That same day, a young American woman reports to her first day of work at the immigration center.

But Ellis Island isn’t a refuge for Francesca or Alma, not when ships depart every day with those who are refused entry to the country and when corruption ripples through every corridor. While Francesca resorts to desperate measures to ensure she will make it off the island, Alma fights for her dreams of becoming a translator, even as women are denied the chance. As the two women face the misdeeds of a system known to manipulate and abuse immigrants searching for new hope in America, they form an unlikely friendship—and share a terrible secret—altering their fates and the lives of the immigrants who come after them.

To schedule a book club visit with Heather or any of our authors on NovelNetwork: 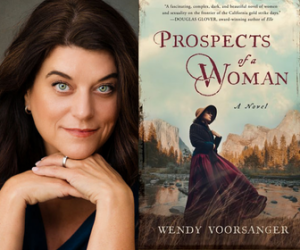 Born and raised on the American River, author Wendy Voorsanger has long-held an intense interest in the history of women in the West. Her debut historical novel, Prospects of a Woman, has won 10 indie literary awards, including the Independent Press Award for Western Fiction, the National Indie Excellence Award for Western Fiction, the International Book Award for Best New Fiction, the IPPY Award for Regional Fiction, and the NexGen Indie Book Awards for Regional Fiction. She earned a BA in journalism from California Polytechnic State University in San Luis Obispo and an MFA from the Vermont College of Fine Arts. She is a member of the Castro Writers’ Cooperative, the Lit Camp Advisory Board, the San Mateo Public Library Literary Society, and the Historical Novel Society.

A gripping and illuminating window into life in the Old West, Prospects of a Woman tells the story of one woman’s passionate quest to carve out a place for herself in the liberal and bewildering society that emerged during the California gold rush frenzy.

Elisabeth Parker comes to California from Massachusetts in 1849 with her new husband, Nate, but soon realizes he’s not the man she thought. As Nate struggles with his sexuality, Elisabeth is forced to confront her preconceived notions of family, love, and opportunity. She finds comfort in corresponding with her childhood friend back home, writer Louisa May Alcott, and spending time in the company of a mysterious Californio. Armed with Ralph Waldo Emerson’s Self-Reliance, she sets out to determine her role in building the West, even as she comes to terms with the sacrifices she must make to achieve independence and happiness.

The Amery Area Public Library enriches the community by connecting people with information, ideas and experiences.

Are you in a book club, library reading group, or is your group of friends, colleagues, family members seeking fabulous authors who are excited and available to meet with you? Then you will be delighted to know that B.A. Shapiro, Keisha Bush, Carol Van Den Hende, Caroline Leavitt, Heather Webb, and Wendy Voorsanger are all members of our wonderful community of over 150 NovelNetwork authors available to meet with small groups via video chat.

To schedule a visit with B.A. Shapiro, Keisha, Carol, Caroline, Heather, Wendy or any of our authors, join FOR FREE  here.