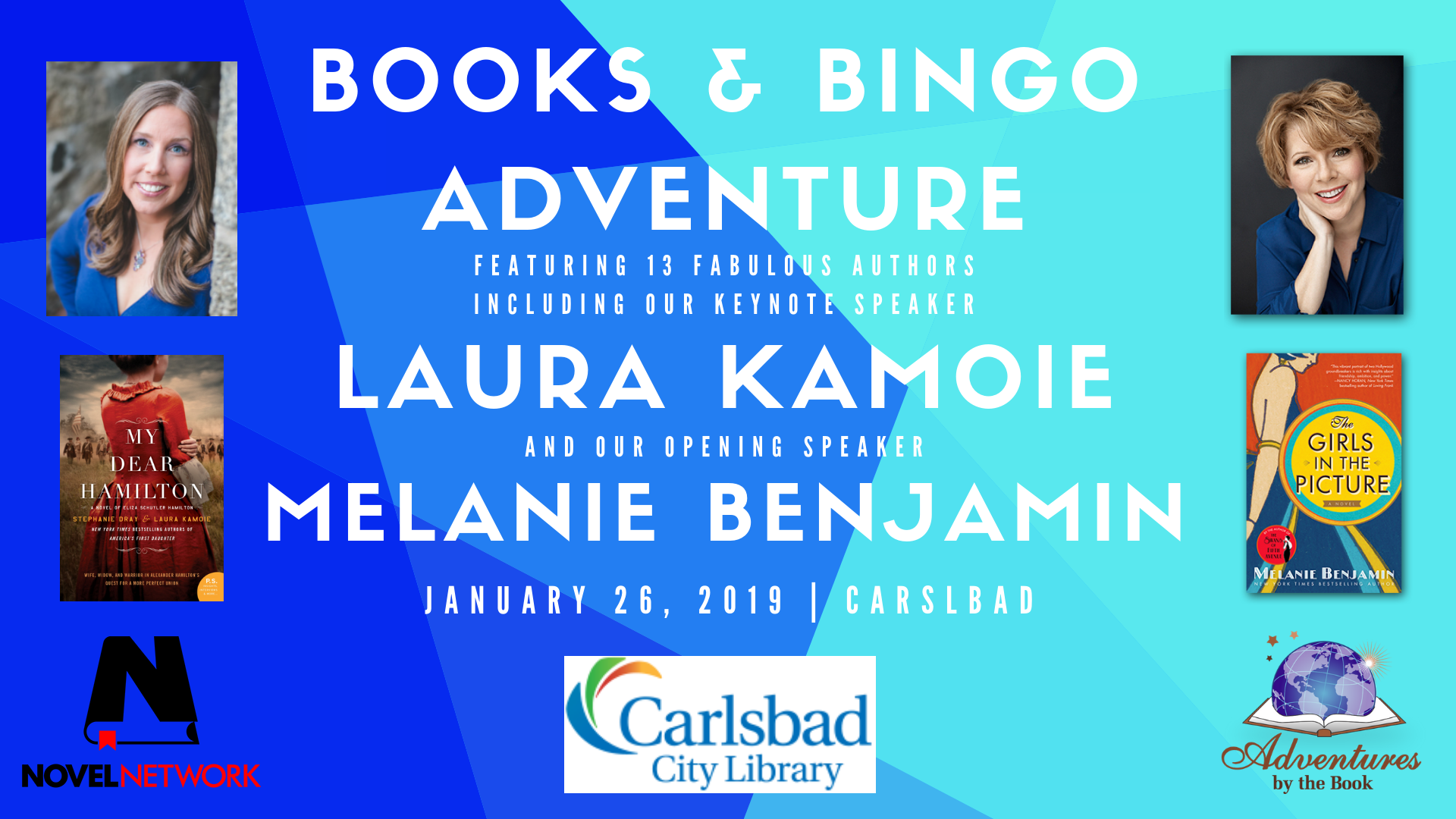 In addition to this unique book extravaganza, which is entirely free to the public, you can also take advantage of some amazing deals on all the books featured by our authors (a 20% off all individual titles, or 30% off if you reserve 6 or more, or 40% off if you reserve all of our offered titles)! This is an online special only, so make sure you reserve your copies below to guarantee availability and discount pricing.

This event is free to the public, however seating is limited and expected to fill up quickly. Admission will be provided upon a first-come, first-serve basis, doors will open at 12:30pm.

Book Clubs Can Connect with These Fabulous Authors Now!

Our Books & Bingo authors are just a small representation of the many authors who are NovelNetwork™ members! Through this innovative new program, you and your book club can schedule a meeting with authors, in person or via video chat, in preparation for this exciting event or if you are unable to attend the event! Or, maybe you’ll remember questions after the event that you forgot to ask and need to connect with them to tie up all those loose ends! All this is possible through NovelNetwork™! Click Herefor more information and to sign up (it’s FREE for book clubs to register)!

NovelNetwork™ is a global space dedicated to connecting authors with avid readers, an expanded professional network, and published peers.  NovelNetwork™ was created to help authors find more innovative ways to connect with readers and promote their books to wider audiences.

About the Keynote Speaker: Laura Kamoie

fascinated by the people, stories, and physical presence of the past, which led her to a lifetime of historical and archaeological study and training. She holds a doctoral degree in early American history from The College of William and Mary, published two non-fiction books on early America, and more recently held the position of Associate Professor of History at the U.S. Naval Academy before transitioning to a full-time career writing genre fiction as the New York Times bestselling author, Laura Kaye.

Writing America’s First Daughter with co-author Stephanie Dray allowed her the exciting opportunity to combine her love of history with her passion for storytelling. Laura lives among the colonial charm of Annapolis, Maryland with her husband and two daughters.

Laura is now working on a solo historical novel and is looking forward to the release of her third book, Ribbons of Scarlet, a collaborative novel told in 6 parts (learn more here!) in Fall 2019.

Schedule a visit with Laura on NovelNetwork now!

About the Opening Speaker: Melanie Benjamin

novels The Swans of Fifth Avenue, about Truman Capote and his society swans, and The Aviator’s Wife, a novel about Anne Morrow Lindbergh. Her latest historical novel, The Girls in the Picture, is about the friendship and creative partnership between two of Hollywood’s earliest female legends—screenwriter Frances Marion and superstar Mary Pickford.

Melanie is a native of the Midwest, having grown up in Indianapolis, Indiana, where she pursued her first love, theater. After raising her two sons, Melanie, a life-long reader (including being the proud winner, two years in a row, of her hometown library’s summer reading program!), decided to pursue a writing career. After writing her own parenting column for a local magazine, and winning a short story contest, Melanie published two contemporary novels under her real name, Melanie Hauser, before turning to historical fiction.

Huda Al-Marashi is the author of the memoir First Comes Marriage: My Not-So-Typical

American Love Story. Excerpts from this memoir have appeared in the anthologies Love Inshallah: The Secret Love Lives of Muslim American Women, Becoming: What Makes a Woman, and Beyond Belief: The Secret Lives of Women and Extreme Religion. Other works have appeared in the Washington Post, the LA Times, al Jazeera, VIDA Review, Refinery 29, the Rumpus, and the Offing. She is the recipient of a Cuyahoga County Creative Workforce Fellowship and an Aspen Summer Words Emerging Writer Fellowship.

Schedule a visit with Huda on NovelNetwork now!

facilitator, who “cut her teeth” as she puts it, on the back of Southern Baptist pews in her provincial Midwest hometown. She grew up in a large family with an evangelical pastor at its head, an upbringing that provided a fertile background from which to harvest setting and characters. The voice in her debut novel This I know comes straight from the heart. Eldonna is also the subject of the award-winning documentary “Perfect Strangers” that follows one kidney patient and one potential kidney donor in their search for a possible match. Her memoir Lost in Translation also chronicles this life-changing decision.

Schedule a visit with Eldonna on NovelNetwork now!

Dr. Zohreh (Zoe) Khazai Ghahremani is the author of Sky of Red Poppies, winner of KPBS’s One Book,

One San Diego 2012. Her sophomore novel, The Moon Daughter, has recently been released to much acclaim. An immigrant, Zohreh draws heavily from her Iranian-American culture in her writing. Her work has won several prestigious awards, including first place in California Stories (2005), San Diego Book Awards (2004), and Best Fiction at Santa Barbara Writers Conference (2004). Hundreds of her articles and short stories have appeared in US and foreign publications, and she is a columnist for ZAN magazine.

Schedule a visit with Zoe on NovelNetwork now!

Elise Hooper grew up in New England as a bonafide bookworm. After eventually moving to the West

coast and attending graduate school, she started writing and teaching high school English and history. Her first novel brings her full circle, back to a family dear to her since childhood—the Alcotts. As a young girl, she pored through Louisa May Alcott’s books and attended drama camp at the restored Alcott family home in Concord, Massachusetts. Although Louisa was always the headliner, her overlooked youngest sister, May, the artist, intrigued me. Elise Hooper is drawn to historical figures, especially women, who linger in the footnotes of history books. Her second novel, Learning to See, follows the life of pioneering documentary photographer, Dorothea Lange.

Schedule a visit with Elise on NovelNetwork now!

Armed with a BA in English from UCLA and an MA in Film/TV from LMU, Janna King began

her career with a job as a movie studio receptionist. She went on to become an assistant for TV executives and producers, reading much material, which in turn, prompted much writing. Her spec scripts garnered work on various one-hour dramas. She is a freelance journalist and blogger, co-founding the website, The Broad Life. Her debut novel, The Seasonaires, was released in May, 2018 from Pegasus Books. Janna lives in Los Angeles with her husband and two rescue pooches.

Schedule a visit with Janna on NovelNetwork now!

standalone and series based emotionally charged domestic drama, family suspense, and women’s fiction. Her books are sold worldwide in more than 28 countries and are being translated into 24 languages (and counting). Co-founder of the Women’s Fiction Writers Association, an international organization that boasts over 1,000 writers, Kerry resides in Northern California with her husband, two children, two naughty kitties, and an aging Golden Retriever convinced she’s still a puppy.

Schedule a visit with Kerry on NovelNetwork now!

Nicole Meier is a native Southern Californian who pulled up roots and moved to the Pacific Northwest,

where she lives with her husband, three children, and one very nosey Aussiedoodle.

Her debut novel, The House of Bradbury, a story of an aspiring writer living in the house of iconic author Ray Bradbury, was chosen as a Best Book of 2016 by Refinery29. Her works have been published in the Oregonian, Cascade Journal, Southern Oregon Magazine, Women Writers Women’s Books, We Heart Writing, and more. Her newest novel, The Girl Made of Clay, is out now.

Schedule a visit with Nicole on NovelNetwork now!

what goes on behind closed doors of seemingly perfect lives. Her novels include Best Day Ever, All the Difference, Here, Home, Hope, In the Mirror, and The Goodbye Year. Her modern romance novels are set on beaches, including the Indigo Island series and the Laguna Beach series, also its own Kindle World.  She lives in Southern California with her family and is at work on her next novel.

Schedule a visit with Kaira on NovelNetwork now!

Katrin Schumann was born in Germany and grew up in Brooklyn and London—as a consequence, most of

her writing explores our search for a sense of belonging, and the struggle to define ourselves in the context of our circumstances. She now lives in Boston and Key West, and is Program Coordinator of the Key West Literary Seminar and Workshops.

Her novel The Forgotten Hours is a ripped-from-the-headlines debut about the fallout on a New York family after a teen accuses her best friend’s father of sexual assault. It was a hard book to write and Katrin is hoping it will spark a million conversations. Her work has been featured multiple times on Today and in Woman’s Day, The London Times, and on NPR, as well as other national and international media.

Schedule a visit with Katrin on NovelNetwork now!

Stephanie Storey’s debut novel Oil and Marble is a Los Angeles Timesbestseller, was named one of Hudson

Booksellers’ Best Books of 2016, and was called “extraordinarily entertaining” by The New York Times. She has a degree in Fine Arts from Vanderbilt University and attended a PhD program in Art History—before leaving to get her MFA in Creative Writing from Emerson College. She has studied art in Italy and been on a pilgrimage to see every Michelangelo on display in Europe. She has also been a television producer for over 15 years in Los Angeles for shows like Tavis Smiley on PBS, The Arsenio Hall Show for CBS, and The Writers’ Room for Sundance Channel. When not writing novels or producing television, she can usually be found — with her husband, an actor and Emmy-winning comedy writer — traveling the world in search of her next story.