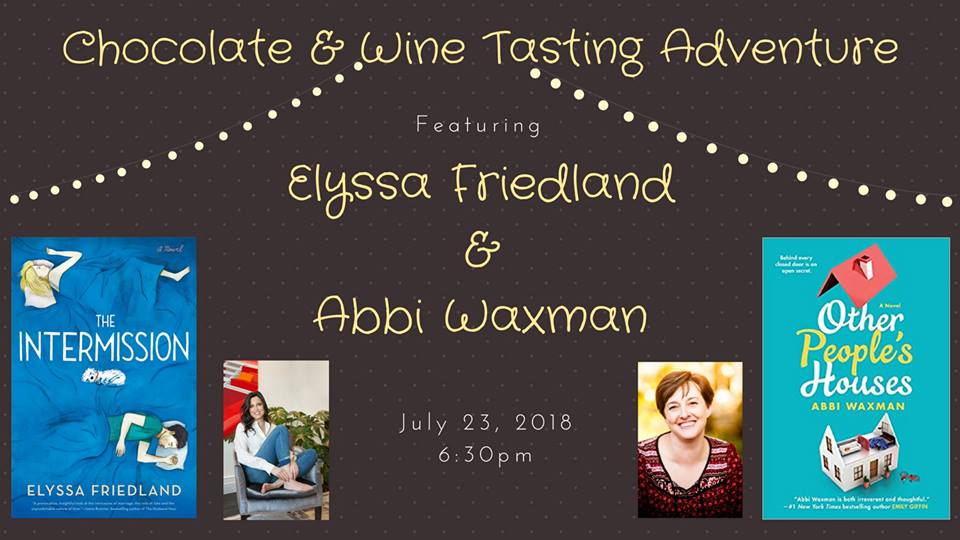 Join us for a delicious night of chocolate, wine, and some fun fictional gossip with authors Elyssa Friedland and Abbi Waxman, as we discuss Friedland’s newest novel The Intermission and Waxman’s newest novel Other People’s Houses.

Your Adventure includes a three-pairing chocolate and wine tasting, tax, gratuity, author presentations, book signing, and the chance to meet the authors up-close and personal in an intimate and decadent setting.

Elyssa Friedland attended Yale University, where she served as managing editor of the Yale Daily News. She is a graduate of Columbia Law School and subsequently worked as an associate at a major firm. Recently, she has written for Popsugar, RealSimple.com and Bustle. Prior to law school, Elyssa wrote for several publications, including Modern Bride, New York magazine, Columbia Journalism Review, CBS MarketWatch.com, Yale Alumni Magazine, and Your Prom. Her debut novel, Love and Miss Communication, was praised by Cosmopolitan, Glamour and InStyle magazines as well as numerous other publications.

In her newest novel, The Intermission, Cass appears to have it all: a loving husband with an impressive pedigree whose career provides her with the finest things in life a stark contrast from her impoverished upbringing. But behind closed doors, the unshakeable confidence she felt on her wedding day is decidedly gone. Jonathan, on the other hand, is still smitten, though the quirks he once found charming in his wife her complexity, her high standards, her refusal to clean the dishes are beginning to grate. Still, he is completely blindsided when Cass demands a marital “intermission”: a six-month separation during which they’ll figure out if the life they’ve built together is, in fact, the one they both want.

What ensues is a tightly-wrought “he said, she said” account of their relationship as the couple spends six months living separate lives on opposite coasts, reuniting once a month for an elaborate custody swap of their beloved dog. Time apart leaves them both vulnerable in surprising ways: Jonathan falls into old habits with an ex, while Cass is ensnared by a powerful and manipulative Hollywood producer with a familiar agenda. Ultimately, neither party is innocent and they both begin to see that the very worst of their problems are rooted in a delicate web of blistering secrets they may never be ready to share.

Abbi Waxman was born in England in 1970, the oldest child of two copywriters who never should have been together in the first place. Once her father ran off to buy cigarettes and never came back, her mother began a highly successful career writing crime fiction. She encouraged Abbi and her sister Emily to read anything and everything they could pull down from the shelves, and they did. Naturally lazy and disinclined to dress up, Abbi went into advertising, working as a copywriter and then a creative director at various advertising agencies in London and New York. Clients ranged from big and traditional, (AT&T, Chase Manhattan Bank, IBM, American Express, Unilever, Mercedes-Benz) to big and morally corrupt (R. J. Reynolds) to big and larcenous (Enron). Eventually she quit advertising, had three kids and started writing books, TV shows and screenplays, largely in order to get a moment’s peace.

In her newest novel, Other People’s Houses, at any given moment in other people’s houses, you can find…repressed hopes and dreams…moments of unexpected joy…someone making love on the floor to a man who is most definitely not her

As the longtime local carpool mom, Frances Bloom is sometimes an unwilling witness to her neighbors’ private lives. She knows her cousin is hiding her desire for another baby from her spouse, Bill Horton’s wife is mysteriously missing, and now this… After the shock of seeing Anne Porter in all her extramarital glory, Frances vows to stay in her own lane. But that’s a notion easier said than done when Anne’s husband throws her out a couple of days later. The repercussions of the affair reverberate through the four carpool families–and Frances finds herself navigating a moral minefield that could make or break a marriage.