Compositions of Life: A Virtual Adventure by the Book 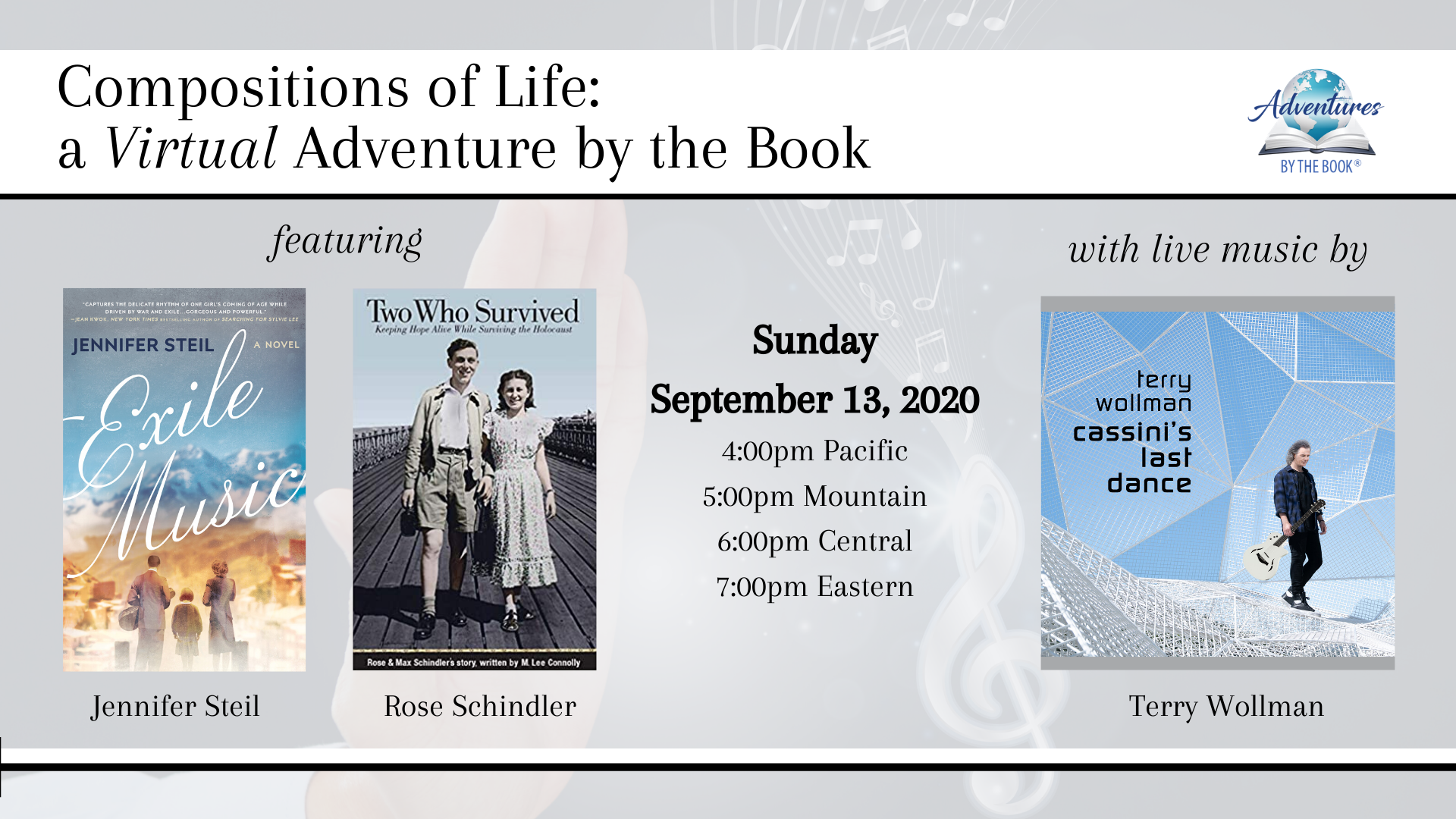 We are pleased to invite you to a very special Grandparents Day event, our Compositions of Life Virtual Adventure featuring 90 year old Holocaust survivor Rose Schindler, award-winning author and journalist Jennifer Steil, and renowned Hollywood musician Terry Wollman.  Join us on Zoom* to “meet” these creative artists and experience their unique, devastating, inspiring, and ultimately beautiful, compositions of life.

As you relax in the comfort of your own home, allow our three speakers to share their powerful stories:

Rose Schindler’s composition of life was nearly destroyed by an evil force that took everything away from her at a young age: her family, her friends, her home, her belongings, and her innocence. Yet, despite this devastating beginning, together with Max, the love of her life and another Holocaust survivor, Rose rewrote her life’s story to show the world that in the end, love will prevail, but also to remind us all that we are NEVER TO FORGET!

Jennifer Steil’s composition shares a little known story of Holocaust survivors who are are forced to flee to South America, but remain haunted by the music that can no longer be their livelihood.

Terry Wollman’s compositions of life are created through music and allow him to express artistry with joy and abandon, to work without compromise for what you believe in, and to be selfish with your discipline and selfless in your performance, but ultimately to have fun.

Celebrate Grandparent’s Day with three very special people who offer an important reminder why, regardless of our circumstances, we are ultimately the author of our own unique Composition of Life. Share their stories, and then sit back and relax, because you are in for another treat, as Terry Wollman performs a live 20 minute mini-concert of his renowned music. If you are unhappy about the composition of your life, meeting these three amazing speakers will inspire you to rewrite your own story.

This Virtual Adventure was designed not only to support three creative artists whose book tours and events were cancelled due to COVID-19, but also to provide readers with our signature Adventures by the Book® multi-sensorial experience that brings literature to life in exciting and unique ways. Event admission is included with your purchase of any of the authors’ books/music, or purchase all three, and receive a special bundled discount.

Your Adventure includes your choice of any of the authors’ books or music, shipping within the US, signed book or music plate(s), a virtual book/music discussion with three compositional artists, and a 20 minute mini-concert.

*Instructions to join the Zoom virtual Adventure will be emailed to you three days prior to the event. Please note that no technical assistance will be available during the event, so we highly recommend you practice using Zoom with friends and family prior to the event. If you do not receive your Zoom invite, please contact us.

About the Featured Speakers 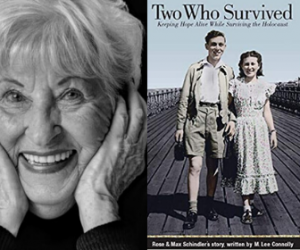 Rose Schindler (1929-) was born and raised in Czechoslovakia. In 1944, she was deported to Auschwitz along with her parents, aunt, five sisters and two brothers when she was just 14 years old. Her husband Max (1929-2017), from Cottbus, Germany, was deported to Poland along with his family and sent to a forced labor group in 1942. Over a three year period, Max was sent to six concentration camps.

Despite these horrible beginnings, Max and Rose found each other and have been engaged in Holocaust activities for much of their lives. They are members of the ’45 Aide Society and involved in The Butterfly Project, whose mission is to educate students about the Holocaust. Rose has also been the president of the New Life Club, a local San Diego organization of Holocaust survivors.They have been interviewed extensively by the news media and their video testimonies are included at the USC Shoah Foundation Institute – the organization founded by Steven Spielberg.

Max and Rose have earned many awards as well. They were honored to receive the Jewish Heritage Month Local Heroes Award from KPBS television in 2016. Rose was named one of the Cool Women of 2015 by the San Diego Girl Scouts, as well as a Woman of Valor during the 24th Annual Lipinsky Family Jewish Arts Festival. She was awarded an honorary high school diploma from La Jolla Country Day School in 2018, and awarded an honorary Master of Business Administration by the California International Business University in May 2019. A sought-after speaker, Rose continues to recount her story regularly at schools and events.

Two Who Survived, written by M. Lee Connolly, chronicles the true story of two children from different worlds: a city boy and a country girl. When the persecution of Jews began in the 1940s, both were plucked from their homes and thrust into concentration camps. They were stripped of everything and forced to navigate a truly incomprehensible, volatile, dangerous and unpredictable world. Despite their exposure to the horrors of the Holocaust, they endured and carried on with a determination that shaped them forever.

Follow the lives of Max and Rose as they learned to adapt to a reality beyond belief and emerged stronger than ever. When they were finally liberated from their concentration camps, they navigated a new world individually before finding each other to form what each so tragically lost: a family. 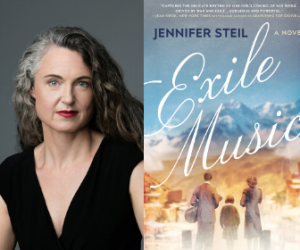 Jennifer Steil is an award-winning author and journalist who lives in many countries (currently Uzbekistan). Her novel, The Ambassador’s Wife, won the 2013 William Faulkner-William Wisdom Creative Writing Competition Best Novel award and the 2016 Phillip McMath Post Publication Book Award. The novel has received considerable critical acclaim, notably in the Seattle Times, Publishers Weekly, Booklist, and The New York Times Book Review, and has been optioned for film, with plans to create a television miniseries starring Oscar-winner Anne Hathaway.

Her first book, The Woman Who Fell From the Sky, received praise from The New York Times, Newsweek, and the Sydney Morning Herald. The Minneapolis Star-Tribune chose it as one of their best travel books of the year in 2010, and Elle magazine awarded it their Readers’ Prize. National Geographic Traveler included the book in their 2014 recommended reading list. A bisexual writer who has lived in Arabia and South America for nearly a decade, she is interested in transcultural issues, freedom of expression, and human rights.

Her third book, the novel Exile Music, is based on an unexplored slice of World War II history. A captivating story of a young Jewish girl whose family flees refined and urbane Vienna for safe harbor in the mountains of Bolivia in 1938 and follows the lives of a family of Austrian Jewish musicians who seek refuge from the Nazis in Bolivia in 1938. Even as the number of Jewish refugees in the small community grows, her family is haunted by the music that can no longer be their livelihood, and by the family and friends they left behind. 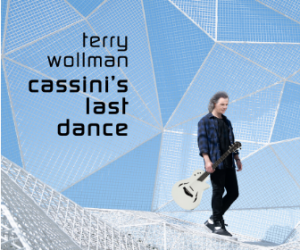 Born in Miami, renowned Beverly Hills musician Terry Wollman moved to Los Angeles after graduating from the prestigious Berklee College of Music with a degree in Arranging. He quickly built a solid reputation as an in-demand Producer, Guitarist, Music Director and Composer. Terry has worked with an array of artists including Melissa Manchester, Billy Preston, The Crusaders, Little Richard, Wilson Phillips, Joan Baez, Joe Walsh, Keb’ Mo’, and Eartha Kitt, to name just a few.

Terry hosts a popular podcast, “Making It with Terry Wollman”, that explores the secrets, successes and strategies for making it in the entertainment biz. His latest album, “Cassini’s Last Dance”, drops late summer 2020.