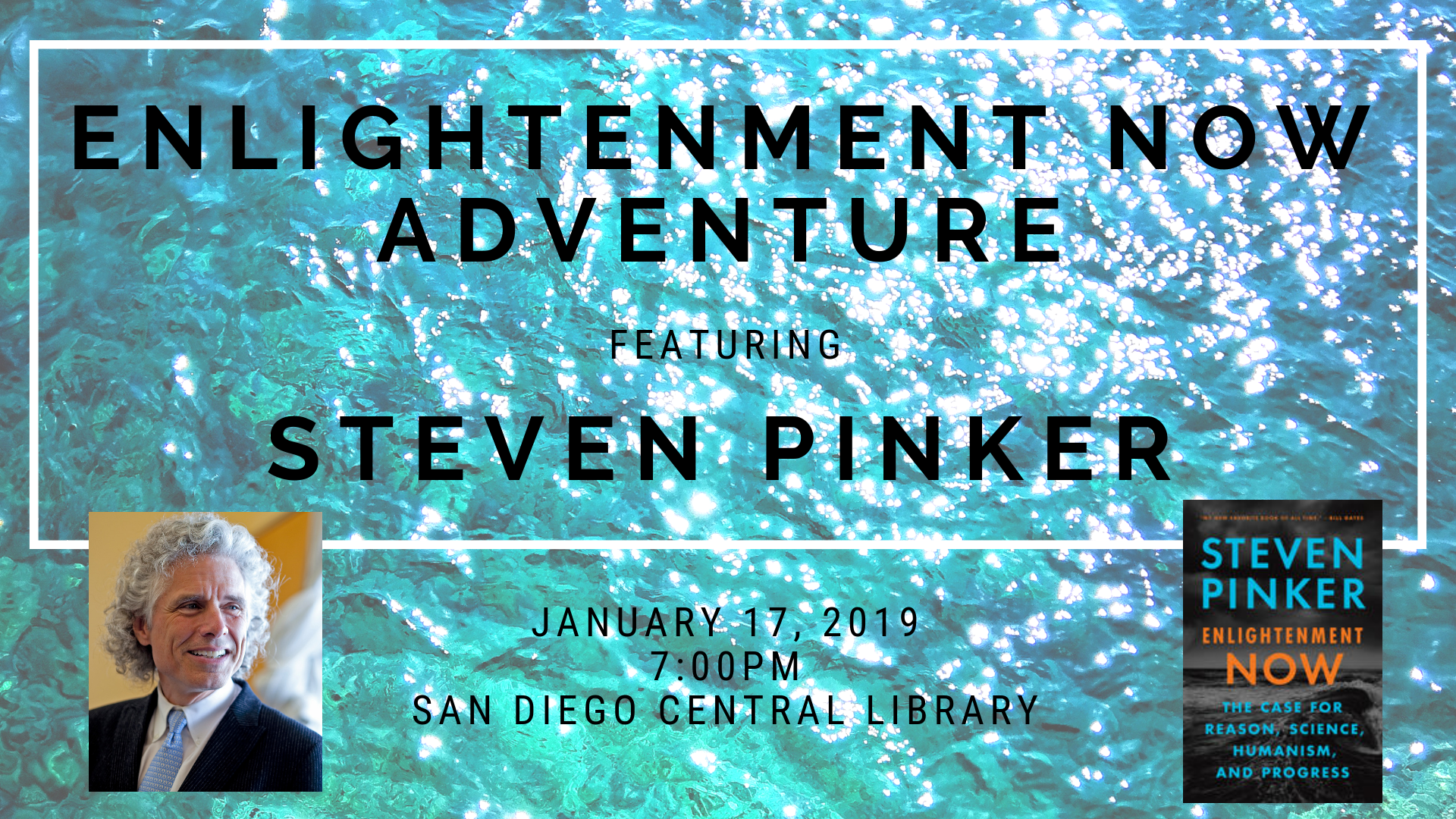 in partnership with The Library Shop

SEATING FOR THIS EVENT IS SOLD OUT; A LIMITED NUMBER OF STANDING ROOM ONLY TICKETS ARE AVAILABLE BELOW WHILE SUPPLIES LAST

Adventures by the Book®  is pleased to partner with the Library Shop for a fascinating evening with  Steven Pinker, the New York Times and internationally bestselling author of The Blank Slate and The Sense of Style. Pinker has been named the Humanist of the Year, Honorary President of the Canadian Psychological Association, Time magazine’s Hundred Most Influential People in the World Today, Foreign Policy‘s 100 Global Thinkers, and the recipient of eight honorary doctorates.

Is the world really falling apart? Is the ideal of progress obsolete? In this elegant assessment of the human condition in the third millennium, cognitive scientist and public intellectual Steven Pinker urges us to step back from the gory headlines and prophesies of doom, which play to our psychological biases. Instead, follow the data: In 75 jaw-dropping graphs, Pinker shows that life, health, prosperity, safety, peace, knowledge, and happiness are on the rise, not just in the West, but worldwide. This progress is not the result of some cosmic force. It is a gift of the Enlightenment: the conviction that reason and science can enhance human flourishing.

Far from being a naïve hope, the Enlightenment, we now know, has worked. But more than ever, it needs a vigorous defense. The Enlightenment project swims against currents of human nature—tribalism, authoritarianism, demonization, magical thinking—which demagogues are all too willing to exploit. Many commentators, committed to political, religious, or romantic ideologies, fight a rearguard action against it. The result is a corrosive fatalism and a willingness to wreck the precious institutions of liberal democracy and global cooperation.

With intellectual depth and literary flair, Pinker makes the case for reason, science, and humanism: the ideals we need to confront our problems and continue our progress.

This Adventure includes a signed copy of Enlightenment Now: The Case for Reason, Science, Humanism, and Progress, author presentation, book discussion, Q&A, book signing, and the opportunity to meet one of the top experimental psychologists in the world.

*Seating for this event is sold out. A limited number of standing room only tickets are available below while supplies last.

Steven Pinker is an experimental psychologist who conducts research in visual cognition, psycholinguistics, and social relations. He grew up in Montreal and earned his BA from McGill and his PhD from Harvard. Currently Johnstone Professor of Psychology at Harvard, he has also taught at Stanford and MIT. He has won numerous prizes for his research, his teaching, and his nine books, including The Language Instinct, How the Mind Works, The Blank Slate, The Better Angels of Our Nature, and The Sense of Style.

He is an elected member of the National Academy of Sciences, a two-time Pulitzer Prize finalist, a Humanist of the Year, a recipient of nine honorary doctorates, and one of Foreign Policy’s “World’s Top 100 Public Intellectuals” and Time’s “100 Most Influential People in the World Today.” He is Chair of the Usage Panel of the American Heritage Dictionary, and writes frequently for The New York Times, The Guardian, and other publications. His tenth book, to be published in February 2018, is called Enlightenment Now: The Case for Reason, Science, Humanism, and Progress.