Friends of the Library: A Virtual Adventure 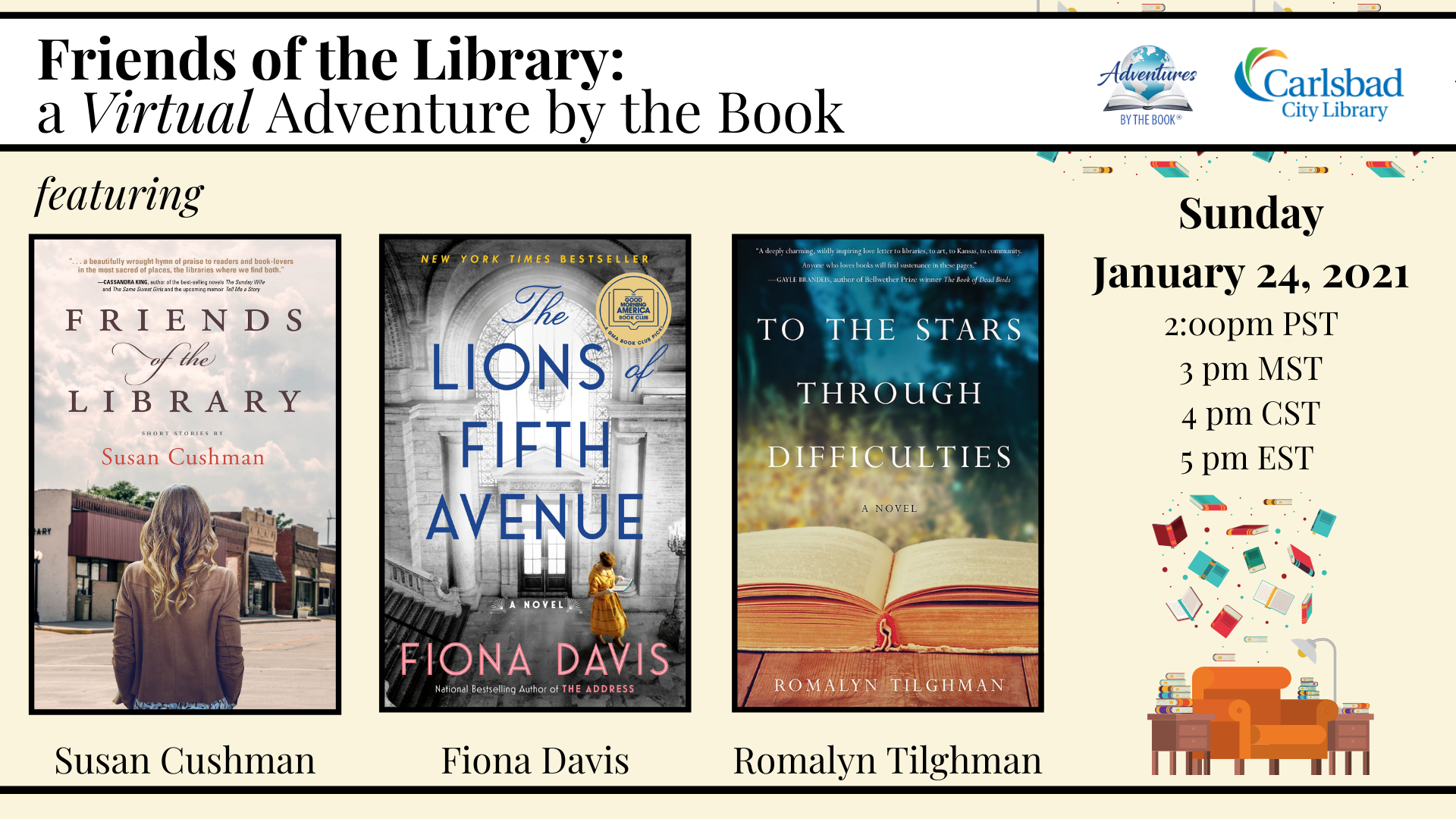 For many readers, our fondest memories revolve around getting our first library card. Whether we are visiting beloved local libraries like the Carlsbad City Library, or walking up the steps past the iconic Lions of Fifth Avenue in New York City,  and whether support is provided locally through Friends of the Libraries, or on a grander scale like Andrew Carnegie provided, our country now boasts more than 115,000 libraries in the United States that serve tens of millions of Americans every day.

Yet for the value public libraries offer to our communities, how much do we really know about their history? If you are curious, join us at our Friends of the Library Virtual Adventure featuring New York Times bestselling author Fiona Davis and award-winning authors Susan Cushman and Romalyn Tilghman. The event, in partnership with the Carlsbad City Library will share the stories revealed in The Lions of Fifth Avenue, Friends of the Library, and To the Stars, followed by a fascinating behind the scenes video presentation of the New York Public Library.

While this event is free, your purchase of a book(s) below (to be shipped to you within the U.S.) provides much-needed support to these authors whose book tours and events have been cancelled due to COVID-19. And if you want to give back to libraries at a time when their support is needed more than ever, consider purchasing a book (or our discounted three-book bundle) and we will ship your books to you or to your library of choice.

Your Adventure includes a book discussion with the three authors, Q&A, a video presentation of the New York Public Library, and the opportunity to meet the authors via Zoom. Books may be ordered below for shipping within the U.S. and will include a signed bookplate. See below for registration information. 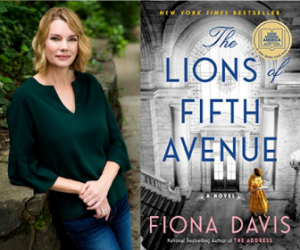 Fiona Davis is a New York Times bestselling author who began her career in New York City as an actress, where she worked on Broadway, off-Broadway, and in regional theater. After getting a master’s degree at Columbia Journalism School, she fell in love with writing, leapfrogging from editor to freelance journalist before finally settling down as an author of historical fiction. Fiona’s books have been translated into more than a dozen languages. She’s a graduate of the College of William & Mary and is based in New York City.

In The Lions of Fifth Avenue, Fiona’s latest New York Times bestselling historical novel (and also The GMA Book Club Pick for August, USA Today, Publisher’s Weekly & Indie Bestseller), a series of book thefts roils the iconic New York Public Library, leaving two generations of strong-willed women to pick up the pieces. It’s 1913, and on the surface, Laura Lyons couldn’t ask for more out of life—her husband is the superintendent of the New York Public Library, allowing their family to live in an apartment within the grand building, and they are blessed with two children. But headstrong, passionate Laura wants more, and when she takes a leap of faith and applies to the Columbia Journalism School, her world is cracked wide open. As her studies take her all over the city, she finds herself drawn to Greenwich Village’s new bohemia, where she discovers the Heterodoxy Club—a radical, all-female group in which women are encouraged to loudly share their opinions on suffrage, birth control, and women’s rights. Soon, Laura finds herself questioning her traditional role as wife and mother. But when valuable books are stolen back at the library, threatening the home and institution she loves, she’s forced to confront her shifting priorities head on . . . and may just lose everything in the process.

Eighty years later, in 1993, Sadie Donovan struggles with the legacy of her grandmother, the famous essayist Laura Lyons, especially after she’s wrangled her dream job as a curator at the New York Public Library. But the job quickly becomes a nightmare when rare manuscripts, notes, and books for the exhibit Sadie’s running begin disappearing from the library’s famous Berg Collection. Determined to save both the exhibit and her career, the typically risk-adverse Sadie teams up with a private security expert to uncover the culprit. However, things unexpectedly become personal when the investigation leads Sadie to some unwelcome truths about her own family heritage—truths that shed new light on the biggest tragedy in the library’s history. 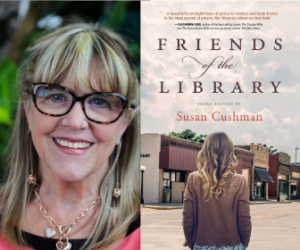 Susan Cushman is the author of Cherry Bomb, a novel set in Georgia in the 1970s and ’80s, in which a young girl who escapes from a religious cult and throws up graffiti as a cry for help. Her second novel is coming in June of 2021. John and Mary Margaret is inspired by the short story of the same title in Friends of the Library, in which a black boy and a white girl fall in love on the Ole Miss campus in 1966. Set against the backdrop of over fifty years of civil rights history in Mississippi and Memphis, their struggle to overcome the odds gives us hope for a future of justice and equality for all.

Much of her writing is infused with elements of her own life, including the very mystical spirituality of her Orthodox Christian faith and the personal demons she has been chasing since childhood. Her essays, short stories, memoir, and novel all reflect what she has learned through many dark nights of the soul, but also contain elements of hope and healing and honor her Southern roots.

Friends of the Library, Susan’s short-story collection features Adele Covington, who becomes an author in her sixties and goes on a book tour to speak to the Friends of the Library groups in ten small towns in her home state of Mississippi. Chasing her personal demons through the Christ-haunted South of her childhood, Adele befriends an eclectic group of wounded people and decides to tell their stories. From Eupora to Meridian, from a budding artist with an abusive husband to a seven-year-old with a rare form of cancer, each story contains elements of hope and healing and honors the heart, soul, and history of the Magnolia State. 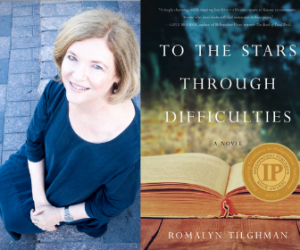 Romalyn Tilghman was hired many years ago and straight out of graduate school as Executive Director of the Association of Community Arts Councils of Kansas and was lucky enough to work with rural arts councils throughout the state and to see first-hand how groups of (mostly) women encouraged culture on the Plains. She has worked for over twenty years as a free-lance consultant in the arts – conducting strategic planning, initiating audience engagement projects, and assessing grant programs for nonprofit organizations, government agencies, and private foundations, and has served on the boards of Americans for the Arts, Association of California Symphony Orchestras, and Western Arts Alliance, as well as on numerous national panels.

Her featured book, To the Stars through Difficulties, was inspired by the fifty-nine Carnegie libraries built in Kansas early in the 20th century. Andrew Carnegie was the Johnny Appleseed of libraries – but public libraries would never have thrived on the prairie in the early 20th Century if it weren’t for the women in small and remote communities who sponsored waffle suppers, minstrel shows, and women’s baseball games to buy books.

Angelina returns to her father’s hometown of New Hope to complete her dissertation on the Carnegie libraries, just as Traci arrives as artist-in-residence at the renovated Carnegie Arts Center, just when Gayle takes refuge after the devastation of the neighboring town of Prairie Hill by a tornado. Discovery of an old journal provides not only the information Angelina needs to finish her dissertation but also the ammunition to save the Arts Center from attacks by the Religious Righteous and the inspiration for the neighboring and rival town of Prairie Hill to build a cultural center as the first act of reclaiming their lives after the tornado.

This event is free and open to the public; however, registration is necessary through the Carlsbad Library (click here) to receive your Zoom invite. While the event is free, your purchase of a book(s) below offers support to these authors whose book tours and events have been cancelled due to COVID. Book prices below include shipping within the U.S. and will include signed bookplates.