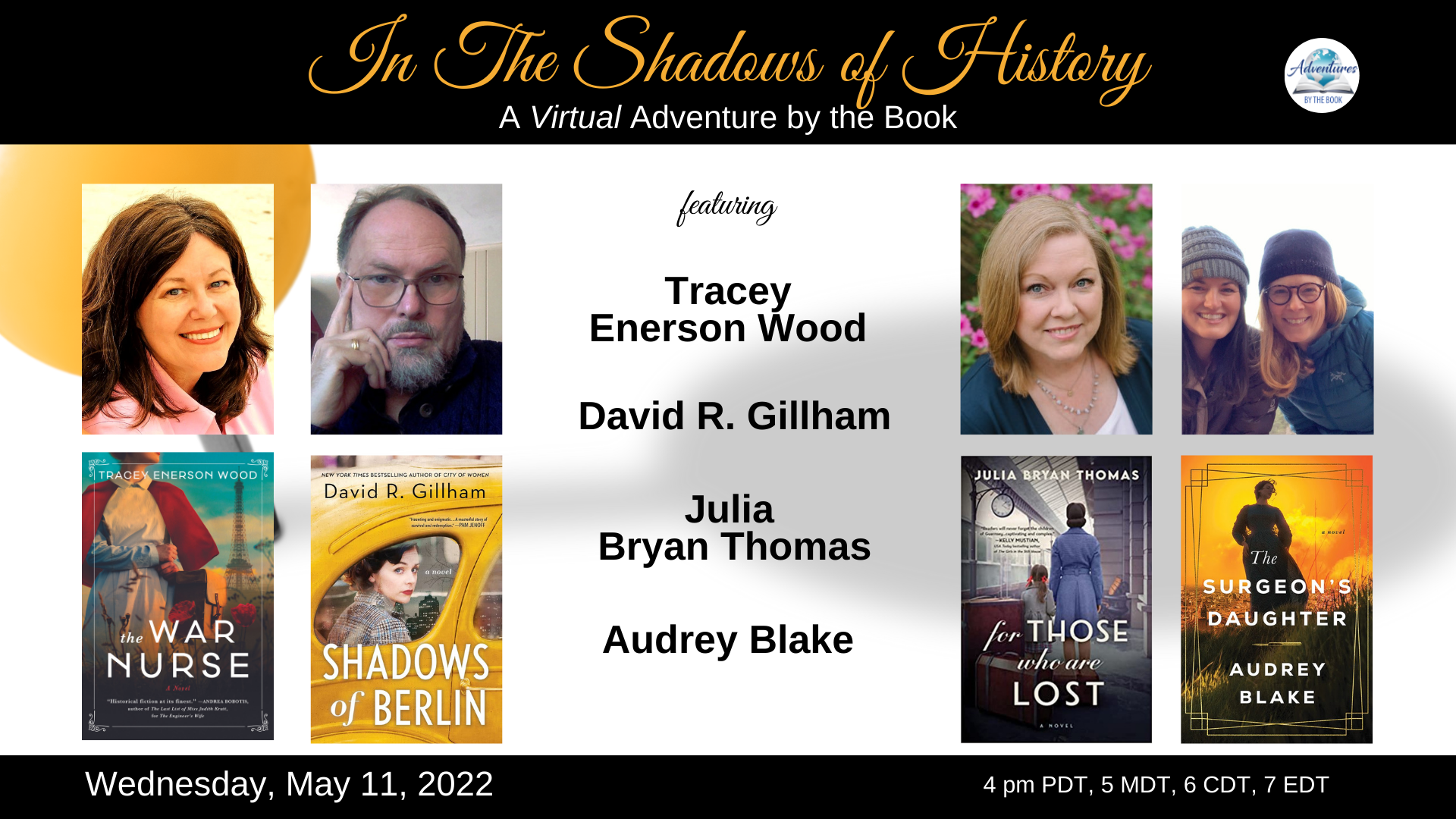 “We walk unknowing amid the shadows of our past and, forgetting our history, are ignorant of ourselves.” – Salman Rushdie

Courtesy of New York Times and bestselling authors David R. Gillham, Audrey Blake, Julia Bryan Thomas, and Tracey Enerson Wood, here’s your opportunity to step out of the shadows and become enlightened at our upcoming In the Shadows of History Adventure.  Join us on Zoom* to “meet” David, Audrey, Julia, and Tracey, as they share the stories behind their new novels.

This Virtual Adventure was designed not only to support creative artists whose book tours and events were cancelled due to COVID-19. Event admission is included with your purchase of any of the authors’ books, or purchase all four and receive a special bundled discount. Signed bookplates and shipping are included. 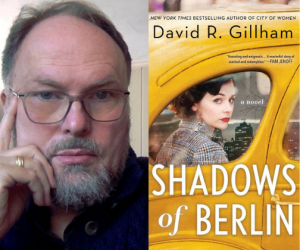 David R Gillham is the New York Times and USA Today bestselling author of City of Women and also Annelies: a Novel of Anne Frank. He studied screenwriting at the University of Southern California before transitioning into fiction. After moving to New York City, Gillham spent more than a decade in the book business, and he now lives with his family in Western Massachusetts.

In his new historical novel, Shadows of Berlin, it is 1955 in New York City, a city engorged with skyscrapers, blaring traffic, instant coffee, roaring subways, and ultra-modern TVs, and a city that daily re-invents itself to meet a perpetually unfolding future.

But in a certain walk-up in Chelsea, the past is as close as the present. Rachel came to Manhattan in a wave of displaced Jews who managed to survive the horrors of war. Fleeing with her Uncle Fritz, Rachel hoped to find freedom from her pain in New York — and in the arms of her new American husband, Aaron.

This child of Berlin and daughter of an artist cannot seem to outrun her guilt, even in her new role as a “normal American housewife,” not until she can shed the ghosts of her past. And when Uncle Fritz discovers, in a dreary midtown pawn shop, the most shocking portrait that her mother had ever painted, Rachel’s memories begin to terrorize her, forcing her to face the choices she made to stay alive―choices that might be her undoing.
​
From the cafes of war-torn Germany to the frantic drumbeat of 1950’s Manhattan, Shadows of Berlin dramatically explores survival, redemption and the way we learn to love and forgive across impossible divides.. 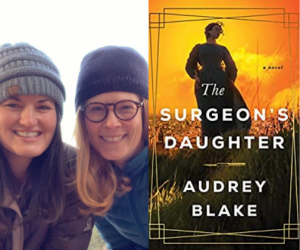 Bestselling author Audrey Blake has a split personality–because she is the creative alter ego of writing duo Jaima Fixsen and Regina Sirois, two authors who met as finalists of a writing contest and have been writing together happily ever since. They share a love of history, nature, literature and stories of redoubtable women. Both are prairie girls: Jaima hails from Alberta, Canada, and Regina calls the wheatfields of Kansas home. .

Women’s work is a matter of life and death.

In Audrey Blake’s new book, The Surgeon’s Daughter, Nora Beady, the only female student at a prestigious medical school in Bologna, is a rarity. In the 19th century women are expected to remain at home and raise children, so her unconventional, indelicate ambitions to become a licensed surgeon offend the men around her.

Everything changes when she allies herself with Magdalena Morenco, the sole female doctor on-staff. Together the two women develop new techniques to improve a groundbreaking surgery: the Cesarean section. It’s a highly dangerous procedure and the research is grueling, but even worse is the vitriolic response from men. Most don’t trust the findings of women, and many can choose to deny their wives medical care.

Already facing resistance on all sides, Nora is shaken when she meets a patient who will die without the surgery. If the procedure is successful, her work could change the world. But a failure could cost everything: precious lives, Nora’s career, and the role women will be allowed to play in medicine.

Julia Bryan Thomas (no website) is is the author of the new work of the heartbreaking, thought-provoking, and uplifting historical novel, For Those Who Are Lost. She is married to mystery novelist Will Thomas..

Inspired by true events, For Those Who Are Lost begins on the eve of the Nazi invasion of the island of Guernsey, when terrified parents have a choice to make: send their children alone to England, or keep the family together and risk whatever may come to their villages.

Ava and Joseph Simon reluctantly put their 9-year-old son, Henry, and four-year-old daughter, Catherine, in the care of their son’s teacher, who will escort them on a boat to mainland England. Just as the ferry is about to leave, the teacher’s sister, Lily appears. The two trade places: Helen doesn’t want to leave Guernsey, and Lily is desperate for a fresh start.

Lily is the one who accompanies the children to England, and Lily is the one who lets Henry get on a train by himself, deciding in a split second to take Catherine with her and walk the other way. That split-second decision lingers long after the war ends, impacting the rest of their lives. 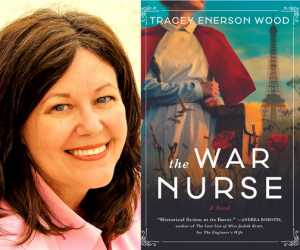 Tracey Enerson Wood has always had a writing bug. While working as a Registered Nurse, starting her own Interior Design company, raising two children, and bouncing around the world as a military wife, she indulged in her passion as a playwright, screenwriter and novelist. She has authored magazine columns and other non-fiction, written and directed plays of all lengths, including Grits, Fleas and Carrots, Rocks and Other Hard Places, Alone, and Fog.

Other passions include food and cooking, and honoring military heroes. Her co-authored anthology/cookbook Homefront Cooking, American Veterans share Recipes, Wit, and Wisdom, was released in May, 2018, and all authors’ profits will be donated to organizations that support veterans.

She asked dozens of young women to lay their lives on the line during the Great War. Can she protect them? Superintendent of Nurses Julia Stimson must recruit sixty-five nurses to relieve the battle-worn British, months before American troops are ready to be deployed. She knows that the young nurses serving near the front lines will face a challenging situation, but nothing could have prepared her for the challenges that await when they arrive at British Base Hospital 12 in Rouen, France. The primitive conditions, a convoluted supply system, and horrific battle wounds are enough to discourage the most hardened nurses, and Julia can do nothing but lead by example―even as the military doctors undermine her authority and make her question her very place in the hospital tent.

When trainloads of soldiers stricken by a mysterious respiratory illness arrive one after the other, overwhelming the hospital’s limited resources, and threatening the health of her staff, Julia faces an unthinkable choice―to step outside the bounds of her profession and risk the career she has fought so hard for, or to watch the people she cares for most die in her arms. Based on a true story, The War Nurse is a sweeping historical novel by international bestselling author Tracey Enerson Wood that takes readers on an unforgettable journey through WWI France.

To schedule a book club visit with Tracey or any of our authors on NovelNetwork:

Chat with Authors for Free

Are you in a book club, or do you have a group of friends, colleagues, or other social group who are seeking fabulous authors who are excited and available to meet with you? Then you will be delighted to know that Tracey Enerson Wood is just one of the members of our wonderful community of nearly 150 NovelNetwork® authors, available to meet with book clubs via video chat, and you can even do so via Zoom (for free) from the safety and comfort of your own homes.

To schedule a visit with Tracey, or any of our authors, join for free here.