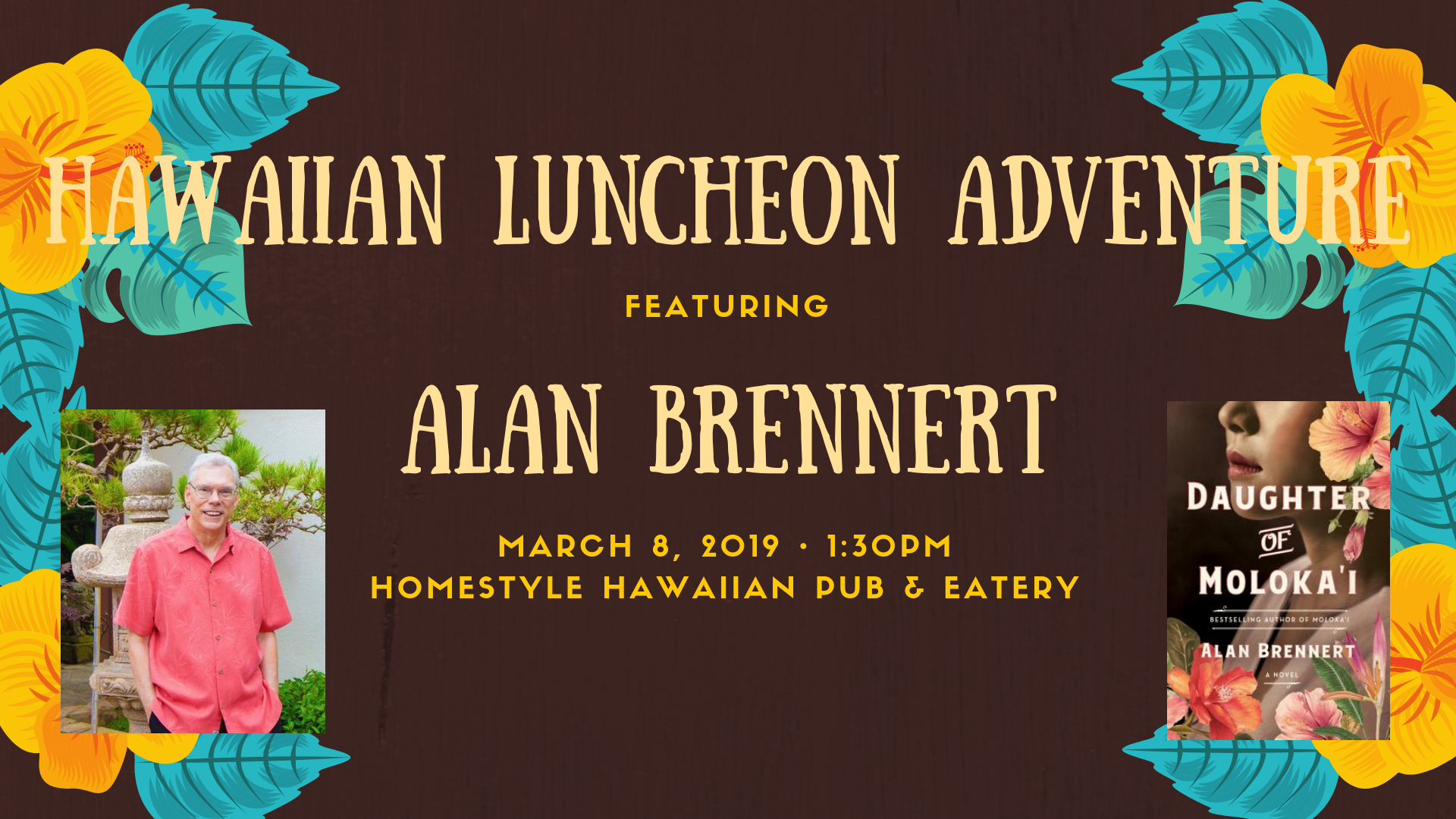 With 2012 One Book, One San Diego Winner Alan Brennert

THIS EVENT IS SOLD OUT. IF YOU WISH TO ADD YOUR NAME TO THE WAIT LIST, PLEASE EMAIL SELINA@ADVENTURESBYTHEBOOK.COM

Join us as we celebrate bestselling and 2012 One Book One, San Diego winner Alan Brennert’s newest novel, Daughter of Moloka’i. Alan’s highly anticipated sequel to acclaimed book club favorite, and national bestseller, Moloka’i  is a companion tale that tells the story of Ruth, the daughter that Rachel Kalama— quarantined for most of her life at the isolated leprosy settlement of Kalaupapa— was forced to give up at birth.

If you love food and literature as much as we do, you won’t want to miss this fabulous Adventure. At one of San Diego’s best Hawaiian eateries, Homestyle Hawaiian, we will immerse ourselves in the delicious taste of island cuisine while we listen to Alan discuss his newest novel and the intersection of big movements in history with the personal stories of ordinary people.

Your Adventure includes a delicious homestyle Hawaiian lunch, dessert, your choice of iced tea, lemonade, or soda, tax, gratuity, author presentation, book signing, and the chance to meet the author up-close and personal in an intimate setting.

Alan Brennert is the author of the best-selling historical novels Moloka’i and Honolulu, both favorites of reading groups across the country. Moloka’i was a 2012 “One Book, One San Diego” selection and Honolulu was named one of the best books of 2009 by The Washington Post. People Magazine said of his novel Palisades Park, “Brennert writes his valentine to the New Jersey playground of his youth in ragtime style, mixing fact and fiction. It’s a memorable trip.”

His work on the television series L.A. LAW earned him an Emmy Award in 1991 and his short story “Ma Qui” was honored with a Nebula Award in 1992. His latest book, Daughter of Moloka’i, is a follow-up to Moloka’i that tells the story of Rachel Kalama’s daughter Ruth, her early life, her internment during World War II, and her eventual meeting with her birth mother, Rachel. The novel explores the women’s 22-year relationship, only hinted at it in Moloka’i.

Daughter of Moloka’i is the highly anticipated sequel to Alan Brennert’s acclaimed book club favorite, and national bestseller, Moloka’i. It’s a companion tale that tells the story of Ruth, the daughter that Rachel Kalama—quarantined for most of her life at the isolated leprosy settlement of Kalaupapa—was forced to give up at birth.

The book follows young Ruth from her arrival at the Kapi’olani Home for Girls in Honolulu, to her adoption by a Japanese couple who raise her on a farm in California, her marriage and unjust internment at Manzanar Relocation Camp during World War II—and then, after the war, to the life-altering day when she receives a letter from a woman who says she is Ruth’s birth mother, Rachel.