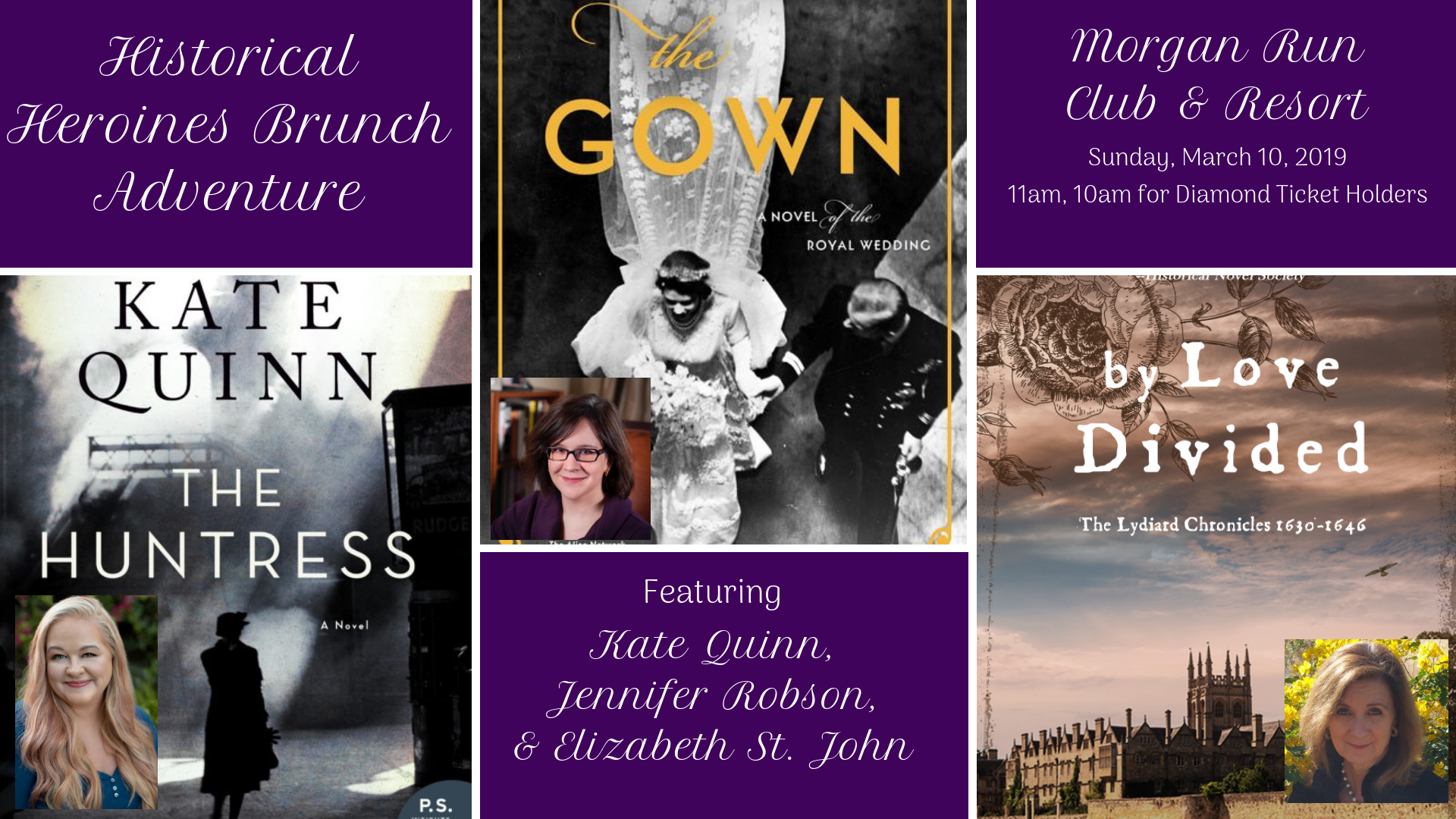 Adventures by the Book is pleased to invite you to a special Historical Heroines Brunch Adventure at the elegant Morgan Run Club & Resort for an empowering event featuring three accomplished female historical fiction writers.

During the event, you will have a opportunity to explore America in the aftermath of World War II, when a battle-haunted English journalist and a Russian female bomber pilot join forces to track the Huntress, a Nazi war criminal gone to ground in America. Or travel to Britain and unveil the story behind one of the most famous wedding gowns in history— Queen Elizabeth’s wedding gown. Or delve even further back to the seventeenth century, where a fiercely independent young woman rejects the decadent English court and an entitled marriage arranged by her aristocratic family, and falls in love with a Roundhead soldier.

The Ruby ticket which also includes an autographed copy of all three of the authors’ latest novels; or

Indulge completely with the Diamond ticket, which includes not only autographed copies of three books, one from each author, but also an intimate and exclusive one-hour VIP champagne mimosa reception to meet and mingle with the authors prior to the event, as well as priority seating at the event.

Kate Quinn is a native of southern California. She attended Boston University,

where she earned a Bachelor’s and Master’s degree in Classical Voice. A lifelong history buff, she has written four novels in the Empress of Rome Saga, and two books in the Italian Renaissance, before turning to the 20th century with The Alice Network and the upcoming The Huntress. All have been translated into multiple languages. Kate and her husband now live in San Diego with two black dogs named Caesar and Calpurnia, and her interests include opera, action movies, cooking, and the Boston Red Sox.

The Huntress: In the aftermath of war, the hunter becomes the hunted… From the author of the New York Times and USA Today bestselling novel, The Alice Network, comes a fascinating historical novel about a battle-haunted English journalist and a Russian female bomber pilot who join forces to track the Huntress, a Nazi war criminal gone to ground in America.

From an academic background, a former editor by profession, and a lifelong history nerd, Jennifer  Robson is now a full-time writer and the author of five novels set during and after the two world wars: Somewhere in France, After theWar is Over, Moonlight Over Paris, Goodnight from London, and the forthcoming The Gown: A Novel of the Royal Wedding, which will be published on December 31, 2018. She currently lives in Toronto, Canada, with her husband and children, and shares her home office with Ellie the sheepdog and her feline companions Sam and Mika.

The Gown is an enthralling historical novel about one of the most famous wedding dresses of the twentieth century— Queen Elizabeth’s wedding gown— and the fascinating women who made it.

Elizabeth St. John was brought up in England and her research has taken her to family memoirs and letters at Nottingham Castle, the British Library, the Tower of London, Yale University and, of course, the family seat of Lydiard Park.  From these fragments, the St.Johns emerge, leaving a portrait, a sentence, a deed that seats them with us, telling of their hopes and dreams.  As she researched, her voice became a conduit for their stories, recounting a passion for the England of her childhood where they once walked, where their portraits still hang, and where they lived, loved and found redemption.

Based on surviving memoirs, court papers and letters of Elizabeth St.John’s family, By Love Divided continues the story of Lucy St.John, The Lady of the Tower. This powerfully emotional novel tells of England’s great divide, and the heart-wrenching choices one family faces.

know that Kate Quinn is one of our newest NovelNetwork authors, available to meet with book clubs via video chat.

To schedule a visit with Kate or any of our authors, join for free here.