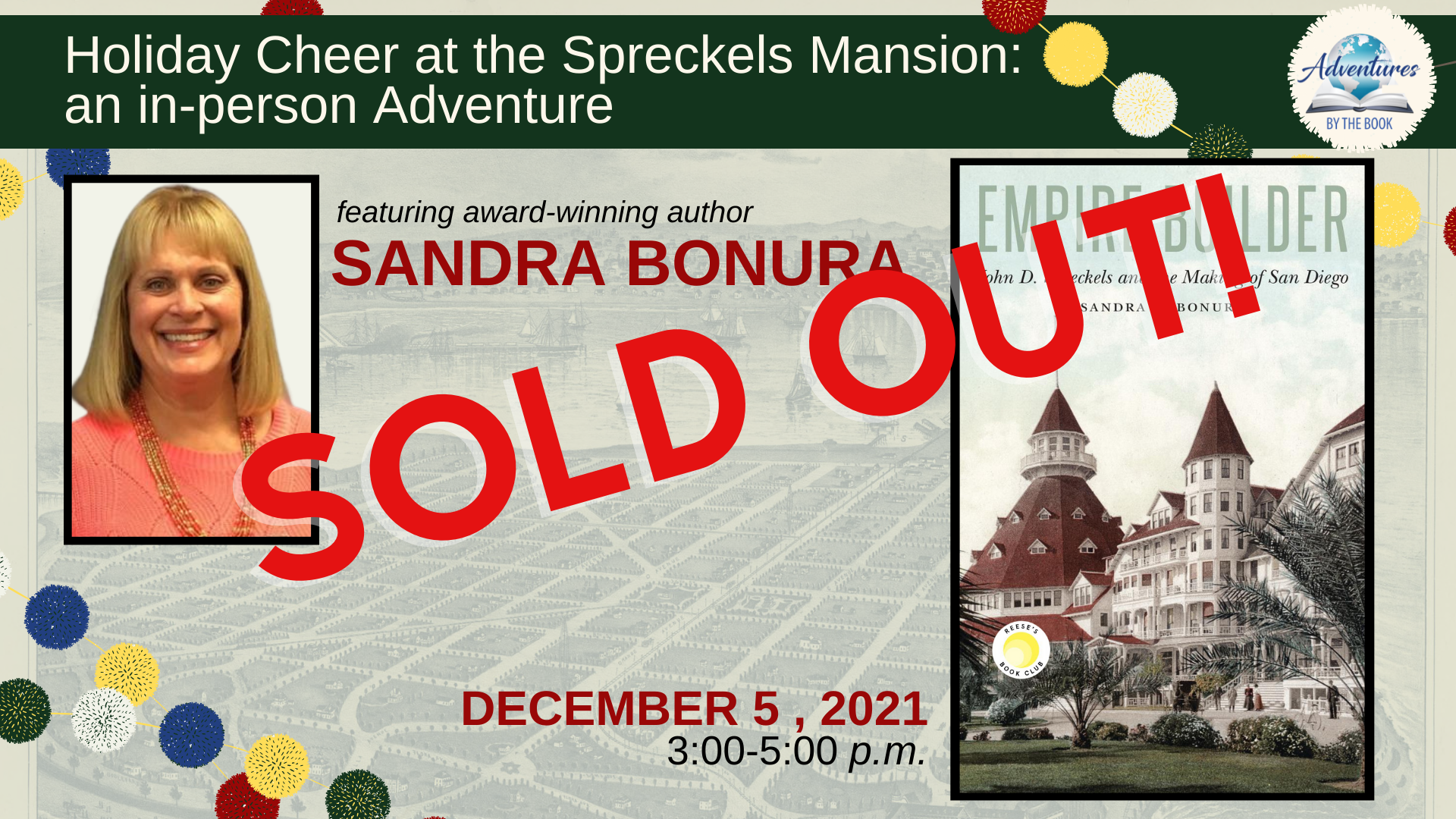 NOTE: This event is SOLD OUT and now accepting a waitlist. Please email events@adventuresbythebook.com if you wish to join the waitlist.

German immigrant Claus Spreckels may not have been THE Santa Claus, but San Diegans have been grateful for the gifts his son John bestowed on our beloved city nearly 135 years ago when he almost single-handedly transformed the bankrupt village of San Diego into the thriving city it is today.

So the holiday season seems the most fitting time to learn a bit more about John D. Spreckels whom surprisingly few people know about. Join award-winning author Sandra Bonura in the Music Room of the former Spreckels mansion in Coronado, now known as the Glorietta Bay Inn, as she discusses her latest book, Empire Builder: John D. Spreckels and the Making of San Diego for a behind-the-scenes look into the Spreckels family and its role in business and into the man himself.

*Your Adventure includes an afternoon at the Glorietta Bay Inn, a hardcover copy of Empire Builder, a brief tour of the former mansion, a glass of wine (or two), light snacks, tax, gratuity, author presentation, book signing, and the opportunity to engage in meaningful and intimate conversation with Sandra. And, if time permits, Sandra may escort us across the street to the Hotel del Coronado to enjoy their beautiful holiday decor as well.

*Due to the special nature of this event, only the first 20 people to register are guaranteed a spot, so make sure to reserve your space quickly. 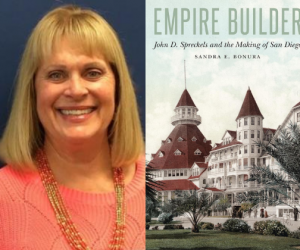 Sandra Bonura lives in Southern California and teaches in higher education. She is deeply interested in education, California (particularly San Diego), and Hawaiian history; when they merge, there is instant engagement.

Sandee is a frequent storyteller and lecturer on the importance of using a multitude of primary sources to gain perspectives on historical events. To that end, she provided a unique viewpoint in a documentary about Queen Lili`uokalani and her involvement in the education of Hawaiian children in the 19th century.

In her new book, Empire Builder: John D. Spreckels and the Making of San Diego, Sandra reveals the man behind the city. Like many native San Diegans who came before and after her, Sandra Bonura grew up in the world John D. Spreckels built. Bonura’s mother worked on Coronado Island, where — at one time or another during his late 19th- and early 20th-century heyday — Spreckels had owned North Island, the San Diego-Coronado Ferry System, the Coronado Beach Company, and the Hotel Del Coronado.

As a girl, Bonura often spent weekends with her grandmother at the Hotel Metropole boarding house, where she could see the marquee of the grand Spreckels Theater from the lobby window. From her grandmother’s second-floor room, Bonura had a fine view of what used to be D Street, which Spreckels renamed Broadway and developed into a thoroughfare worthy of six of his own buildings.

But before he was the man who gave San Diego electric streetcars, its first skyscraper and the Spreckels Organ Pavilion, John D. Spreckels was the son of a hardworking German immigrant, a rebellious son who left the family’s booming sugar business to make his mark on a nowhere town that he loved at first sight.

It was that John D. Spreckels — the man with the humble German roots and the immigrant work ethic — who convinced author Bonura that the story of the other John D. Spreckels — the powerful, ambitious man who put San Diego on multiple maps — was a tale she could tell.
With her new book, Bonura hopes to do justice to both of them.

About the Glorietta Bay Inn

The Glorietta Bay Inn is a historic landmark in Coronado and famous for its grandeur architecture, built-in 1908 as the home of sugar baron John D. Spreckels. The Inn has built a reputation of providing friendly efficient service combined with comfort and charm that has guests returning all year for a memorable stay.