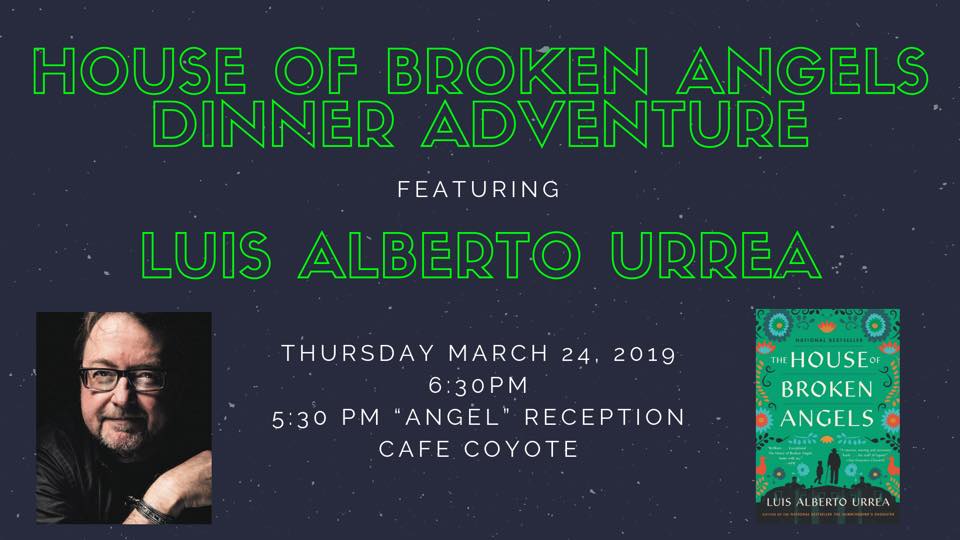 As we feast on a delicious Mexican dinner in the heart of the Old Town at Cafe Coyote, Luis will discuss and share the inspiration behind his latest novel, The House of Broken Angels. In Urrea’s signature exceptional storytelling and what NPR calls “brilliant…exceptional…hums with joy,” The House of Broken Angels is the story of the De La Cruz family, who come together across borders at the behest of patriarch Miguel Angel de La Cruz, who wishes to gather his progeny for a final birthday fiesta.

Your Adventure includes chips and salsa, a delicious Mexican dinner, soft beverage, dessert, tax, gratuity, author presentation, Q&A, book signing, and the chance to meet the author up-close and personal in an authentic and intimate setting.

*Due to the exciting news that Luis has just been announced as a finalist for this year’s National Book Critics Circle Awards, which are being held on our original event date of March 14, 2019, we have moved our event date until March 24, 2019, which means we can celebrate with him at our event!)

**Or better yet, why not join our fiesta a bit early with a special 45 minute “Angel” reception prior to dinner, which not only includes the dinner Adventure, but offers you the unique opportunity to spend 45 minutes extra with the author while enjoying a house cocktail and a copy of The House of Broken Angels, which Luis will exclusively sign for you at the reception. 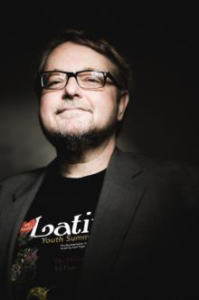 Hailed by NPR as a “literary badass” and a “master storyteller with a rock and roll heart,” Luis Alberto Urrea is a prolific and acclaimed writer who uses his dual-culture life experiences to explore greater themes of love, loss and triumph.

A 2005 Pulitzer Prize finalist for nonfiction and member of the Latino Literature Hall of Fame, Urrea is the critically acclaimed and bestselling author of 17 books, winning numerous awards for his poetry, fiction, and essays. Born in Tijuana to a Mexican father and American mother, Urrea is most recognized as a border writer, though he says, “I am more interested in bridges, not borders.”

After serving as a relief worker in Tijuana and a film extra and columnist-editor-cartoonist for several publications, Urrea moved to Boston where he taught expository writing and fiction workshops at Harvard. He also taught at the University of Louisiana-Lafayette. Urrea currently lives with his family in Naperville, IL, where he is a distinguished professor of creative writing at the University of Illinois-Chicago.

The House of Broken Angels is, as Urrea describes it, “the story of an American family—one that happens to speak Spanish and admire the Virgin of Guadalupe. Imperfect and glorious, messy and hilarious, sometimes heroic.” Inspired by the death of his brother, Urrea’s novel mines his own family history to tell a once-in-a-lifetime tale, simultaneously intimate in its detail and grand in its scope. Miguel Angel De La Cruz, aka “Big Angel,” is dying. The beloved and rapidly declining patriarch of the De La Cruz clan, he assembles his relatives for a final, epic birthday bash. Days before the party, however, his mother, nearly a hundred herself, passes away, resulting in a hefty farewell fete. Over the course of one weekend, the family members reminisce under the San Diego sun and stars, sharing stories about growing up in Mexico, leaving Mexico, and making a home in the U.S.

No matter where you live, whether you were born in the U.S. or grew up elsewhere, this affectionate, passionate, flawed family will likely remind you in some way of your own. And novels like The House of Broken Angels—offering clarifying insight into the daily lives, the trials and triumphs, of Mexican-Americans—are especially needed today. We believe it’s a beautiful masterwork worthy of your close attention.