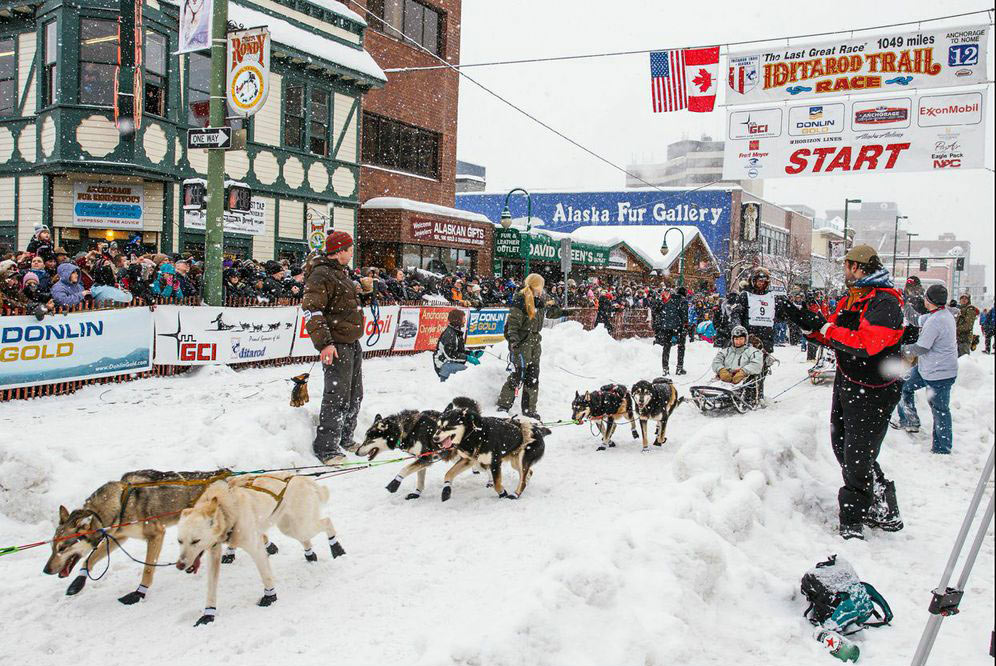 Have you ever dreamed of standing at the starting line of ‘The Last Great Race on Earth’? Imagine yourself among the electric energy that will permeate the icy air in Anchorage on March 5th when the grand Iditarod begins, the day that hundreds of sled dogs and their mushers will stand ready to take off on the 1050-mile race from Anchorage to Nome, Alaska. 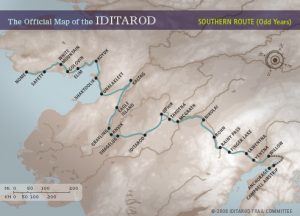 The Iditarod Trail Sled Dog Race® was founded in 1973 by Joe Redington, whose vision was to bring the sled dogs back to the villages and to have the Iditarod Trail recognized as a National Historic Trail. Today, the culmination of that vision is a world class sporting event that covers some of the roughest, most beautiful terrain Mother Nature has to offer.

In 2003, Debbie Moderow entered her first Iditarod. After traveling more than 800 miles, facing whiteout conditions and rough trails barren of snow, Debbie found herself less than 200 miles from the finish line when her dogs decided they didn’t want to run anymore. This first failed attempt crushed Debbie’s confidence, but after reconnecting with her dogs she returned and ventured again to Nome, pushing through injuries, hallucinations, epic storms, flipped sleds, and clashing personalities, both human and canine. In 2005, Debbie prevailed and completed ‘The Last Great Race’. Her epic memoir, Fast Into the Night recounts these journeys. Part adventure, part love story, part inquiry into the mystery of the connection between humans and dogs, Fast into the Night is an exquisitely written memoir of a woman, her dogs, and what can happen when someone puts herself in that place between daring and doubt—and soldiers on. 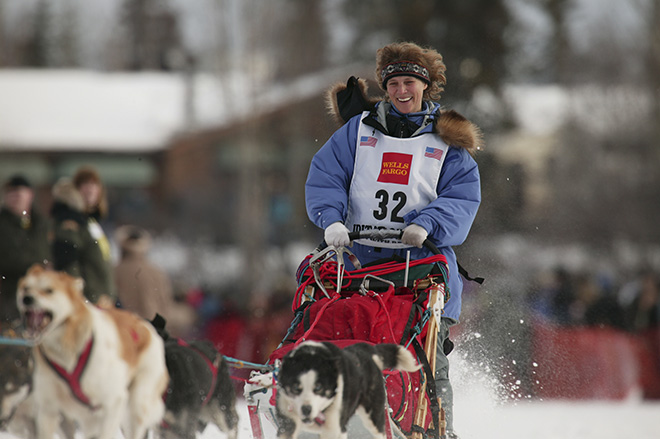 Debbie and her family’s lives have revolved around unique and intelligent huskies since they adopted their first retired sled-dog over 20 years ago. Today they split their time between Anchorage and Denali Park, home to their Salty Dog Kennel, named after that first husky, Salt. The Moderows’ routine life is unlike any we know here in ‘the lower-48’ and Adventures by the Book™ invites you to join us for a week split between Anchorage & Denali, experiencing life as the Moderows’ know it and witnessing the extraordinary start of the “Last Great Race on Earth”.

Adventurers will land in Anchorage on February 27th and be greeted with a hospitable welcome dinner at the Moderows’ home to celebrate their first night in Alaska. The next day we will head out bright and early for Denali Park, home to the 28 huskies of the Salty Dog Kennel. After meeting the team of dogs, we will settle into our accommodations at the Moderows’ Denali home. Over the next three days we will partake in the “dogsledding lifestyle”, with all meals provided, and the opportunity to engage in a variety of wintertime Alaskan activities, such as:

Visiting a Training Camp out on the trail

Possible viewing of natural wonders like moose, caribou, and the Northern Lights 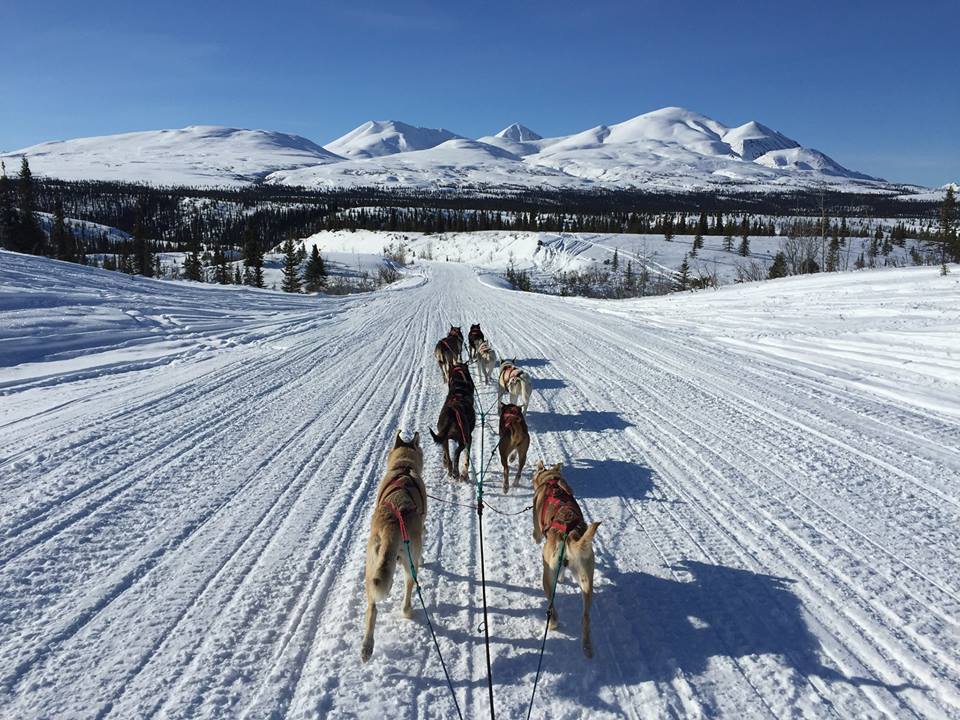 When our three days immersing ourselves in and learning about the intricacies of the “dog-sledding lifestyle” come to an end, our Adventure will just be beginning as we travel back to Anchorage to kick off the 2017 Iditarod.

Our first evening will be spent partaking in the Iditarod festivities happening around the town and taking the opportunity to explore Anchorage further. When we wake in the morning it will be Race Day. That moment you imagined, standing on the sidelines of the race as the fervent energy rises in the air, will arrive with the The Ceremonial Start of the Iditarod. At 10:00 am on March 5th**, we will be in downtown Anchorage ready  to cheer the racers on as they begin their journey of over 1000 miles.

While one would assume that the Ceremonial Start would be the end of the Iditarod excitement for non-participants until the end (an unknown date determined by when the last racer finishes) that is not the case. The official start of the Iditarod, when the time clock for racers begins, is the next day in Willow at 2:00 pm, where we will travel** to experience the bustle of mushers as they set out, truly this time, into the great Alaskan Wilderness.

As the racers’ journey begins, ours will come to an end. That Sunday the Moderow’s will host a farewell dinner at their home, before Adventurers say goodbye to fly back to our ‘lower 48’.

This Adventure is an unrivaled way to experience not only Alaska, but also the Iditarod. You will leave this week with your perspective forever changed by the colossal nature of Alaska and the gumption it takes to pursue its wilderness. More than that, as with all Adventures by the Book, you will be put in a setting where you will form unparalleled connections not only with our inspiring author, Debbie Moderow, but also your fellow Adventurers.

Your Iditarod Adventure includes four nights’ accommodations in Anchorage, transportation to and from Denali, three night’s accommodations in the Moderow’s Denali home (a camp-like settlement with cabin sleeping arrangements), all meals in Denali and some in Anchorage, winter activities, a signed copy of the author’s book, Fast Into the Night, and transportation to and from the Anchorage Airport.

**Please note that Alaskan weather can be unpredictable and that in the unlikely case of conditions that are not ideal for a race start in Anchorage/Willow, the Iditarod start line may change. Adventures by the Book™ is not responsible for an unexpected location change or for transporting travelers to this new destination.Save