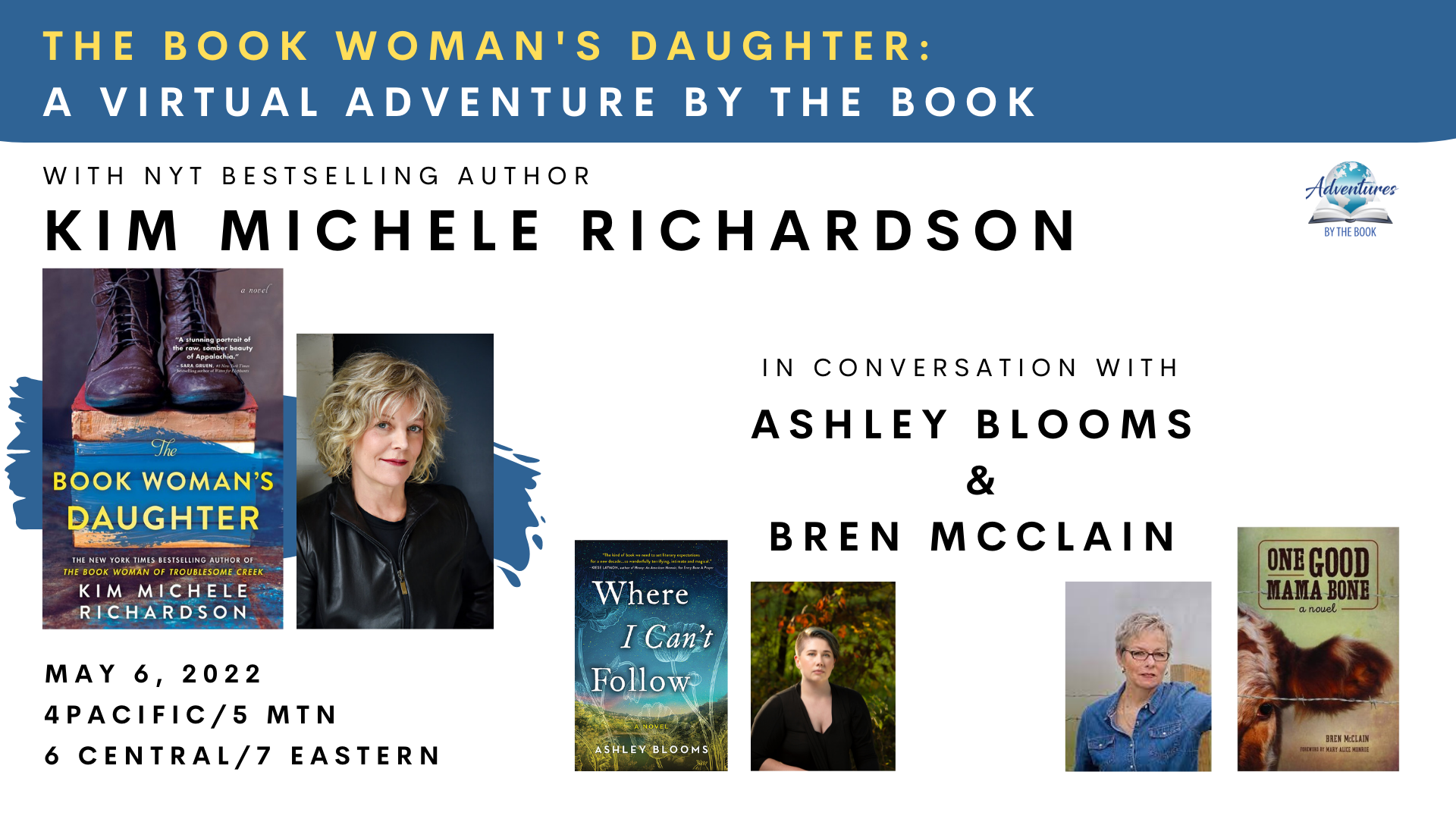 But you must know another story, before they are lost to winters of rotting foliage and sleeping trees, swallowed into the spring hymnals of birdsong . . .

Through stunning imagery and eloquent diction, New York Times and Los Angeles Times bestselling historical fiction author Kim Michele Richardson is back with both the sequel to her blockbuster novel, The Book Woman of Troublesome Creek, and her stand-alone book, The Book Woman’s Daughter.

Join us for an incredible opportunity to hear from Kim, as she discusses her new book The Book Woman’s Daughter, in a moderated conversation with Kentucky author Ashley Blooms and South Carolina author Bren McClain. Perhaps pour yourself a glass of fine Kentucky bourbon, sit back, and enjoy a happy hour discussion as Kim Michele delves into her mesmerizing and beautifully rendered Appalachian tale of strong women, bravery, and resilience.

Your Adventure includes a paperback copy of The Book Woman’s Daughter, tax, shipping within the U.S. and Canada, and a virtual Zoom chat with Kim Michele Richardson in conversation with Ashley Blooms and Bren McClain, and Q&A.

For event admission, simply purchase a copy of The Book Woman’s Daughter below and we will send you a Zoom link a few days prior to the event to access the virtual session. 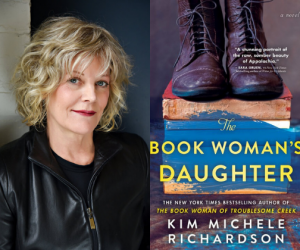 Her latest critically acclaimed novel, The Book Woman of Troublesome Creek has earned a 2020 PBS Readers Choice, 2019 LibraryReads Best Book, Indie Next, SIBA, Forbes Best Historical Novel, Book-A-Million Best Fiction, and is an Oprah’s Buzziest Books pick and a Women’s National Book Association Great Group Reads selection. It was inspired by the real life, remarkable “blue people” of Kentucky, and the fierce, brave Packhorse Librarians who used the power of literacy to overcome bigotry and fear during the Great Depression. The novel is taught widely in high schools and college classrooms.

Her forthcoming fifth novel, The Book Woman’s Daughter, both a stand-alone and a sequel, is the perfect book club read. It follows Honey Lovett, the daughter of the beloved Troublesome book woman, who must fight for her own independence with the help of the women who guide her and the books that set her free.

In the ruggedness of the beautiful Kentucky mountains, Honey Lovett has always known that the old ways can make a hard life harder. As the daughter of the famed blue-skinned, Troublesome Creek packhorse librarian, Honey and her family have been hiding from the law all her life. But when her mother and father are imprisoned, Honey realizes she must fight to stay free, or risk being sent away for good. Picking up her mother’s old packhorse library route, Honey begins to deliver books to the remote hollers of Appalachia. Honey is looking to prove that she doesn’t need anyone telling her how to survive. But the route can be treacherous, and some folks aren’t as keen to let a woman pave her own way.

If Honey wants to bring the freedom books provide to the families who need it most, she’s going to have to fight for her place, and along the way, learn that the extraordinary women who run the hills and hollers can make all the difference in the world. 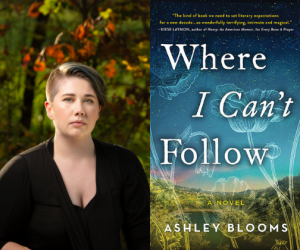 Ashley Blooms is the author of Every Bone a Prayer, which was long-listed for the Crook’s Corner Book Prize and which NPR said “bears within its pages striking beauty and strangeness in equal measure.” Her second novel, Where I Can’t Follow, will be published by Sourcebooks in February 2022.

Born and raised in Cutshin, Kentucky, Blooms received her MFA as a John and Renee Grisham Fellow at the University of Mississippi. Her short stories have appeared in The Year’s Best Dark Fantasy & Horror, Fantasy & Science Fiction, and Strange Horizons, among others. Her nonfiction has appeared in the Oxford American. She’s been awarded scholarships from the Clarion Writer’s Workshop and Appalachian Writer’s Workshop, served as fiction editor for the Yalobusha Review, and worked as an editorial intern and first reader for Tor.com.

Where I Can’t Follow explores the forces that hold people in place, and how they adapt, survive, and struggle to love a place that doesn’t always love them back.

Maren Walker told herself she wouldn’t need to sell pills for long, that it was only means to an end. But that end seems to be stretching as far away as the other side of Blackdamp County, Kentucky. There’s always another bill for Granny’s doctor, another problem with the car, another reason she’s getting nowhere.

She dreams of walking through her little door to leave it all behind. The doors have appeared to the people in her mountain town for as long as anyone can remember, though no one knows where they lead. All anyone knows is that if you go, you’ll never come back. Maren’s mother left through her door when Maren was nine, and her shadow has followed Maren ever since. When she faces the possibility of escaping her struggles for good, Maren must choose just what kind of future she wants to build. 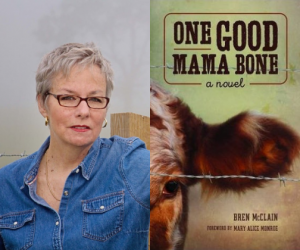 Bren McClain is a writer, who never gave up. After winning a handful of awards over the last two decades for novel excerpts and short stories, her literary novel, One Good Mama Bone, found a home with Pat Conroy’s Story River Books. The novel is longlisted for the 2018 Crook’s Corner Book Prize, received a starred review in “Booklist,” named a winter Okra pick by the Southeastern Independent Booksellers Alliance and made a Pulpwood Queens selection for May. Deep South magazine included it in its recommended list of upcoming Fall/Winter books.

Bren is a two-time winner of the South Carolina Fiction Project and the recipient of the 2005 Fiction Fellowship by the South Carolina Arts Commission. She is at work on her next novel, Took, which was named the gold medal winner for the 2016 William Faulkner –William Wisdom Novel-in-Progress.

In her book, One Good Mama Bone, a mama cow’s devotion to her calf provides lessons in motherhood to a poor Southern woman.

South Carolina, 1950s. Homemaker Sarah Creamer has been left to care for young Emerson Bridge, the product of an affair between Sarah’s husband and her best friend. But beyond the deep wound of their betrayal, Sarah is daunted by the prophecy of her mother’s words, seared in her memory since childhood: “You ain’t got you one good mama bone in you, girl.” When Sarah finds Emerson a steer to compete at an upcoming cattle show, the young calf cries in distress on her farm. Miles away, his mother breaks out of a barbed-wire fence to find him. When Sarah finds the young steer contently nursing a large cow, her education in motherhood begins.

But Luther Dobbins is desperate to regain his championship cattle dynasty, and he will stop at nothing to win. Emboldened by her budding mama bone, Sarah is committed to victory even after she learns the winning steer’s ultimate fate. Will she too stop at nothing, even if it means betraying her teacher? One Good Mama Bone explores the strengths and limitations of parental love and the ethical dilemmas of raising animals for food.