We are pleased to announce another fun Book Bingo (June Pride Month Celebration): A Virtual Adventure, this month in partnership with the Jefferson County Public Library.

If you are already familiar with our popular Southern California series, you will understand why we receive so many requests to expand the program nationwide. Pivoting to virtual events has made this not only possible, but offers up fun opportunities for exciting partnerships, participation by more of our over 150 book club favorite authors, and space to accommodate many more readers!

Be you. Do you. Celebrate you…And celebrate Pride Month by playing book bingo with six book club favorite authors: Ann Aguirre, Annabeth Albert, Kim Taylor Blakemore, Timothy Janovsky, Joshua Moehling, and Katrina Monroe. Enjoy presentations by the authors, while playing an interactive virtual game of bingo, including fun prizes. All you have to do is show up (and why not invite your book club friends and fellow readers to join in as well) to learn about these great new reads!

While this event is free, your purchase of a book(s) below (to be shipped to you within the U.S.) provides much-needed support to these authors. 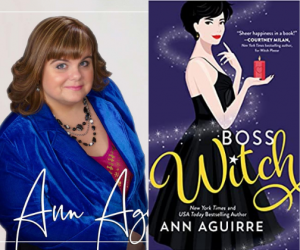 New York Times and USA Today bestselling author Ann Aguirre has been a clown, a clerk, a savior of stray kittens, and a voice actress, not necessarily in that order. She grew up in a yellow house across from a cornfield, but now she lives in Mexico with her family. She writes all kinds of genre fiction, but she has an eternal soft spot for a happily ever after.

In her novel, Boss Witch, Clementine Waterhouse is a perfectly logical witch. She doesn’t tumble headlong into love. Rather she weighs the pros and cons and decides if a relationship is worth pursuing. At least that’s always been her modus operandi before. Clem prefers being the one in charge, always the first to walk away when the time is right. Attraction has never struck her like lightning…until the witch hunter comes to town.

Gavin Rhys hates being a witch hunter, but his family honor is on the line, and he needs to prove he’s nothing like his grandfather, a traitor who let everyone down. But things in St. Claire aren’t what they seem, and Gavin is distracted from the job immediately by a bewitching brunette with a sexy smile and haunting secrets in her eyes.

Can the bossiest witch in town find a happy ending with the last person she should ever love? 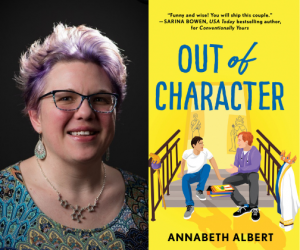 Annabeth Albert grew up sneaking romance novels under the bed covers. Now, she devours all subgenres of romance out in the open—no flashlights required! When she’s not adding to her keeper shelf, she’s a multi-published Pacific Northwest romance writer. She has penned many critically acclaimed and fan-favorite LGBTQ romance series. To find out what she’s working on next and other fun extras, be sure to join her reader group on Facebook! Also, be sure to sign up for her newsletter for free ficlets, bonus reads, and contests. She’s a compulsive knitter, late-night reader, obsessive gamer, and happy bi-pride flag-waver.

In her new book, Out of Character, Jasper Quigley is tired of being everyone’s favorite sidekick. He wants to become the hero of his own life, but that’s not going to happen if he agrees to help out his former best friend turned king of the jocks, Milo Lionetti. High school was miserable enough, thanks, and Jasper has no interest in dredging up painful memories of his old secret crush.

But Milo’s got nowhere else to go. His life is spiraling out of control and he’s looking to turn things back around. Step one? Replace the rare Odyssey cards he lost in an idiotic bet. Step two? Tell his ex-best-friend exactly how he feels―how he’s always felt.

Jasper may be reluctant to reopen old wounds, but he never could resist Milo. There’s a catch, though: if Milo wants his help, he’s going to have to pitch in to make the upcoming children’s hospital charity ball the best ever. But as the two don cosplay for the kids and hunt for rare cards, nostalgia for their lost friendship may turn into something even more lasting… 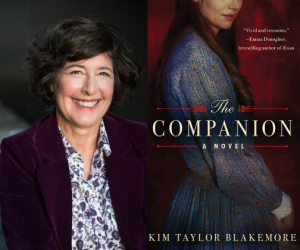 Kim Taylor Blakemore writes historical novels that feature fierce and often dangerous women. She writes about the thieves and servants, murderesses and mediums, grifters and frauds – the women with darker stories, tangled lies and hidden motives. She has been a finalist for the Women’s Fiction Association Star Award and a recipient of a Tucson Festival of Books Literary Award, both for her novel The Companion.

In her book, The Companion, it’s 1855, New Hampshire. Lucy Blunt is set to hang for a double murder. Murderess or victim? Only Lucy knows the truth.

In the shadow of the gallows, Lucy reflects on the events that led to her bitter downfall―from the moment she arrived at the rambling Burton mansion looking for work and a better life to the grisly murders themselves.

In a mysterious household of locked doors and forbidden affections, Lucy slips comfortably into the shadows, where she believes the indiscretions of her past will remain hidden. But when Lucy’s rising status becomes a threat to the mistress’s current companion, the delicate balance of power and loyalty begins to shift, setting into motion a brewing storm of betrayal, suspicion, and rage.

Now, with her execution looming closer, Lucy’s allies fight to have her sentence overturned as the tale she’s spinning nears its conclusion. But how much of her story can we trust? After all, Lucy’s been known to bend the truth…

To schedule a book club visit with Kim or any of our authors on NovelNetwork: 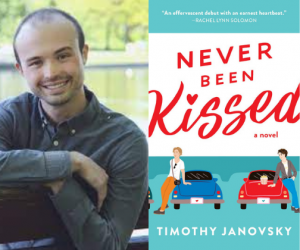 Timothy Janovsky is a queer, multidisciplinary storyteller from New Jersey. He holds a Bachelor’s degree from Muhlenberg College and a self-appointed certificate in rom-com studies (accreditation pending). When he’s not daydreaming about young Hugh Grant, he’s telling jokes, playing characters, and writing books. Never Been Kissed is his first novel.

Dear (never-been-quite-over-you) Crush, it’s been a few years since we were together, but I can’t stop thinking about the time we almost… In his debut novel, Never Been Kissed, Wren Roland has never been kissed, but he wants that movie-perfect ending more than anything. Feeling nostalgic on the eve of his birthday, he sends emails to all the boys he (ahem) loved before he came out. Morning brings the inevitable Oh God What Did I Do?, but he brushes that panic aside. Why stress about it? None of his could-have-beens are actually going to read the emails, much less respond. Right?

Enter Derick Haverford, Wren’s #1 pre-coming-out-crush and his drive-in theater’s new social media intern. Everyone claims he’s coasting on cinematic good looks and his father’s connections, but Wren has always known there’s much more to Derick than meets the eye. Too bad he doesn’t feel the same way about the infamous almost-kiss that once rocked Wren’s world.

Whatever. Wren’s no longer a closeted teenager; he can survive this. But as their hazy summer becomes consumed with a special project that may just save the struggling drive-in for good, Wren and Derick are drawn ever-closer…and maybe, finally, Wren’s dream of a perfect-kiss-before-the-credits is within reach. 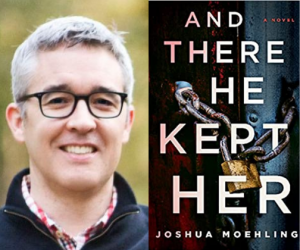 Joshua Moehling lives in Minneapolis and works in the medical device industry by day and writes at night. And There He Kept Her, his first novel, is a sharp, intense thriller combining a dark plot with a relentless pace.

When two teenagers break into a house on a remote lake in search of prescription drugs, what starts as a simple burglary turns into a nightmare for all involved. Emmett Burr has secrets he’s been keeping in his basement for more than two decades, and he’ll do anything to keep his past from being revealed. As he gets the upper hand on his tormentors, the lines blur between victim, abuser, and protector.

Personal tragedy has sent former police officer Ben Packard back to the small Minnesota town of Sandy Lake in search of a fresh start. Now a sheriff’s deputy, Packard is leading the investigation into the missing teens, motivated by a family connection. As clues dry up and time runs out to save them, Packard is forced to reveal his own secrets and dig deep to uncover the dark past of the place he now calls home.

Unrelentingly suspenseful and written with a piercing gaze into the dark depths of the human soul, And There He Kept Her is a thrilling page-turner that introduces readers to a complicated new hero and forces us to consider the true nature of evil. 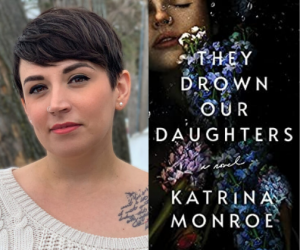 Katrina Monroe lives in Minnesota with her wife, two children, and Eddie, the ghost who haunts their bedroom closets. They Drown Our Daughters (for fans of Jennifer McMahon and Silvia Moreno-Garcia), is her haunting and atmospheric new novel.

They say Cape Disappointment is haunted. That’s why tourists used to flock there in droves. They’d visit the rocky shoreline under the old lighthouse’s watchful eye and fish shells from the water as they pretended to spot dark shapes in the surf. Now the tourists are long gone, and when Meredith Strand and her young daughter return to Meredith’s childhood home after an acrimonious split from her wife, the Cape seems more haunted by regret than any malevolent force.

But her mother, suffering from early stages of Alzheimer’s, is convinced the ghost stories are real. Not only is there something in the water, but it’s watching them. Waiting for them. Reaching out to Meredith’s daughter the way it has to every woman in their line for generations―and if Meredith isn’t careful, all three women, bound by blood and heartbreak, will be lost one by one to the ocean’s mournful call.

Part modern gothic, part ghost story, They Drown Our Daughters explores the depths of motherhood, identity, and the lengths a woman will go to hold on to both.

Jefferson County Public Library in Colorado helps to build an educated and vibrant community by providing equal access to information and opportunities. For this particular bingo event, register with the Jeffco Public Library (coming soon) or you may register below.

Are you in a book club, library reading group, or are your group of friends, colleagues, and family members seeking fabulous authors who are excited and available to meet with you? Then you will be delighted to know that Kim Taylor Blakemore is a member of our wonderful community of over 150 NovelNetwork authors available to meet with small groups via video chat.

NovelNetwork is the nation’s first and only match(dot)com for authors and book clubs to find each other, so check it out today. Book clubs join for free and gain access to our database of dozens of authors, from NYT and international bestsellers to debut authors, cookbook authors, mystery and non-fiction authors, and representing various regions of the United States, and even Alaska and Hawaii, all of whom want to meet with you!

To schedule a visit with Kim Taylor Blakemore or any of our authors, join FOR FREE  here.