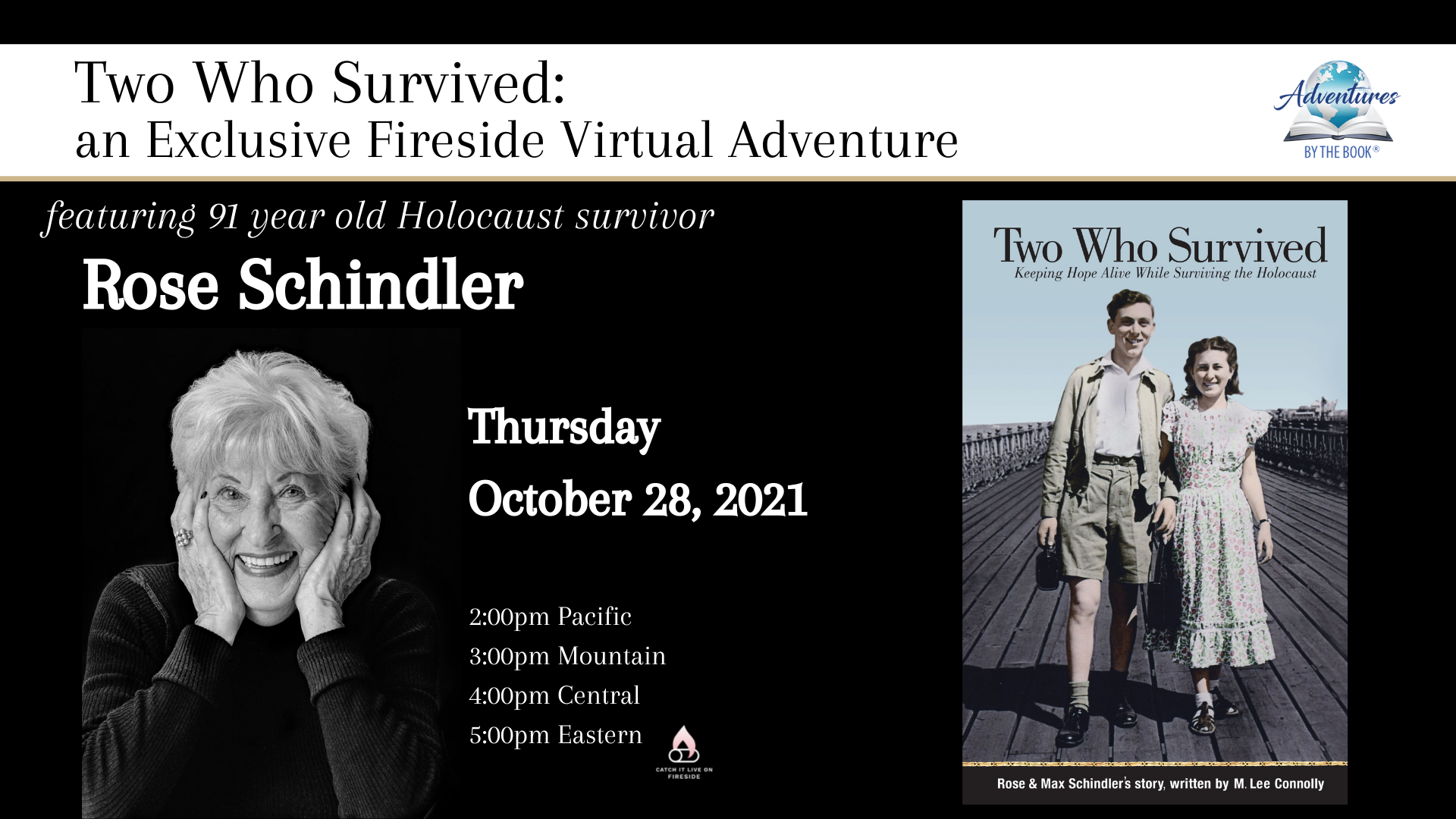 “Stay alive,” he said, “so you can tell the world what they are doing to us.” And at 91 years old, that is just what Rose Schindler is doing and has been doing since that day at Auschwitz, when her father put his hands on her arms and bent down to look into her blue eyes. It was the last time she ever saw him.

Please join us for our most poignant and powerful Adventure yet, where you can help Rose keep her promise to her father by hearing her story of life at Auschwitz, the loss of her family, and ultimately meeting her future husband, fellow Holocaust survivor, Max, and the love and hope that gave them purpose after the Holocaust.

Your Adventure includes a hardcover or paperback copy of Two Who Survived, tax, shipping within the U.S. and Canada, a live Fireside chat with Rose, Q&A, and the opportunity to experience to hear Rose’s remarkable story. 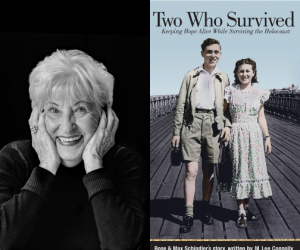 Rose Schindler (1929-) was born and raised in Czechoslovakia. She was deported to Auschwitz along with her parents, aunt, five sisters and two brothers when she was just 14 years old.

Max Schindler (1929-2017) was from Cottbus, Germany. He and his family were deported to Poland and sent to a forced labor group in 1942. Over a three year period, Max was sent to six concentration camps.

Despite these horrible beginnings, Max and Rose found each other and have been engaged in Holocaust activities for much of their lives. They are members of the ’45 Aide Society and involved in The Butterfly Project, whose mission is to educate students about the Holocaust. Rose has also been the president of the New Life Club, a local San Diego organization of Holocaust survivors.

They have been interviewed extensively by the news media and their video testimonies are included at the USC Shoah Foundation Institute – the organization founded by Steven Spielberg.

Max and Rose have earned many awards as well. They were honored to receive the Jewish Heritage Month Local Heroes Award from KPBS television in 2016. Rose was named one of the Cool Women of 2015 by the San Diego Girl Scouts, as well as a Woman of Valor during the 24th Annual Lipinsky Family Jewish Arts Festival. She was awarded an honorary high school diploma from La Jolla Country Day School in 2018, and awarded an honorary Master of Business Administration by the California International Business University in May 2019. A sought-after speaker, Rose continues to recount her story regularly at schools and events.

Two Who Survived, written by M. Lee Connolly, is the compelling Holocaust memoir of Rose and Max and chronicles the true story of two children from different worlds: a city boy and a country girl. When the persecution of Jews began in the late 1930s, both were plucked from their homes and thrust into concentration camps. They were stripped of everything and forced to navigate a truly incomprehensible, volatile, dangerous and unpredictable world. Despite their exposure to the horrors of the Holocaust, they endured and carried on with a determination that shaped them forever.

Follow the lives of Max and Rose as they learned to adapt to a reality beyond belief and emerged stronger than ever. When they were finally liberated from their concentration camps, they navigated a new world individually before finding each other to form what each so tragically lost: a family.