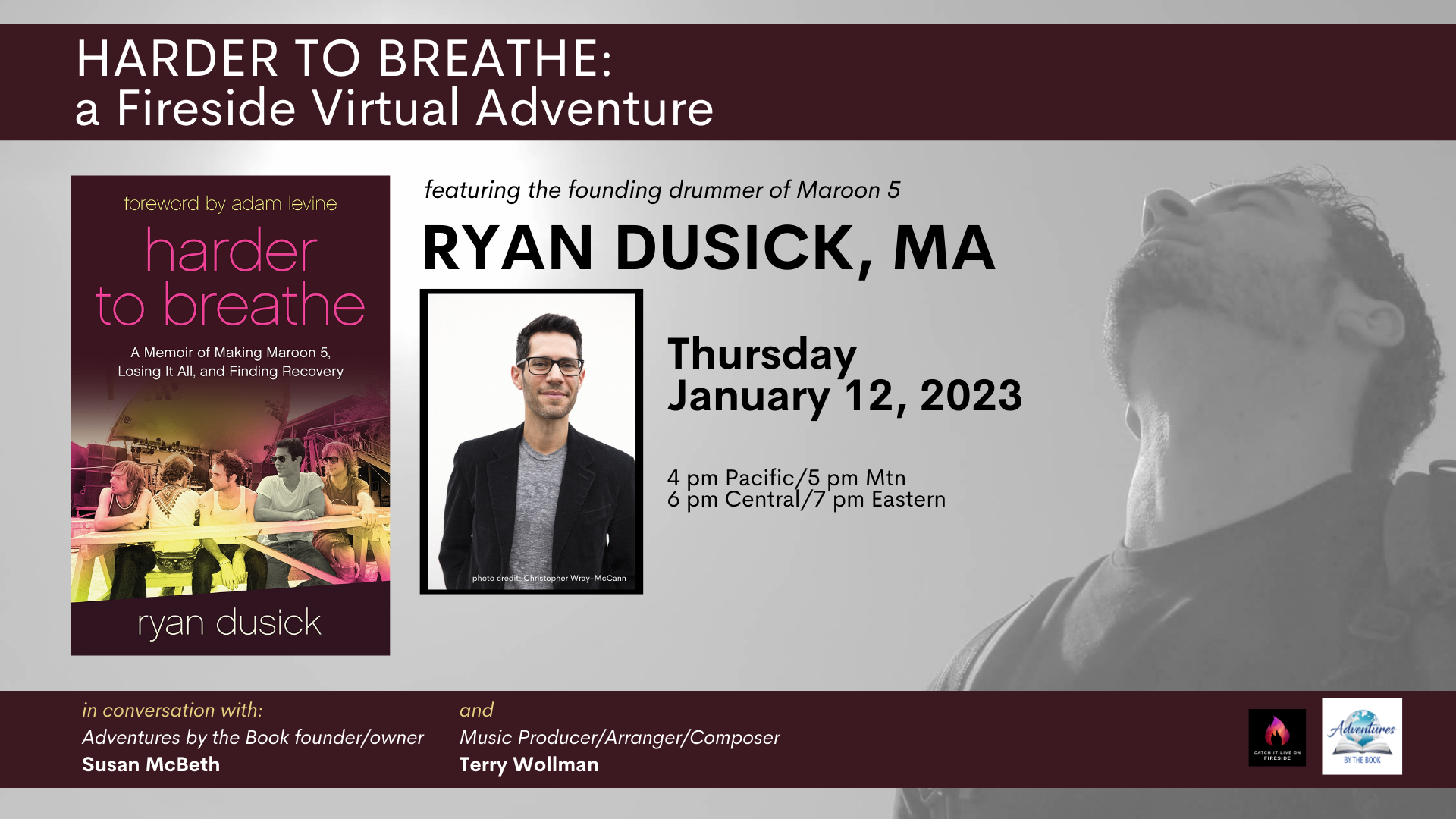 In the 90’s, Ryan Dusick and his friends, including Adam Levine, dreamed of making it big and, against all odds, they did. Yet for drummer Ryan Dusick, stardom came to an abrupt halt with the devastating loss of his ability to play drums due to chronic nerve damage, followed by personal struggles with anxiety and alcoholism after his departure from the band.

Two decades after Harder to Breathe became a megahit song by one of the world’s most popular bands, Maroon 5’s original drummer, Ryan Dusick, presents an unflinching examination of fame, anxiety, mental health, and recovery in his new memoir Harder to Breathe: A Memoir of Making Maroon 5, Losing It All, and Finding Recovery.

Now, in conversation with music producer Terry Wollman and Adventures by the Book founder Susan McBeth, Ryan will share Maroon 5’s story of camaraderie and pressure, as well as his own narrative: a decade lost to liquor and anti-anxiety medication, his ferocious commitment to recovery, and his current perspective as a professional counselor.

Join our FREE virtual event on the exciting new storytelling platform, Fireside, by simply purchasing a book or register below, and we will send you a private VIP link to attend the virtual event. If you have an iPhone or iPad, you can be part of the virtual audience to chat live with Ryan Dusick. With other devices, you can still listen live here to the broadcast.

Your Adventure includes a hardcover copy of Harder to Breathe: A Memoir of Making Maroon 5, Losing It All, and Finding Recover, tax, shipping within the U.S., a live Fireside chat with Ryan Dusick in conversation with Terry Wollman and Susan McBeth, and Q&A. 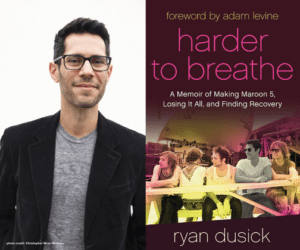 Ryan Dusick is an Associate Marriage and Family Therapist, the founding drummer of the world’s most popular band Maroon 5, a mental health advocate, and an author. His life has been a long and winding road from aspiring pop-star with anxiety, to heartbroken alcoholic, to thriving mental health survivor and messenger of hope in recovery.

His new book, Harder to Breathe, is a roller-coaster memoir about how making it to the top sent him to the bottom—and how he let go of the past and embraced a new future, one breath at a time.

In the nineties, Ryan Dusick and his friends Adam Levine and Jesse Carmichael dreamed about making it big . . . and against all odds, they did. This inside story recounts Maroon 5’s founding and their road to becoming Grammy-winning megastars, told through the eyes of former drummer Ryan Dusick. He takes readers behind the scenes of the band’s meteoric rise to success—and the grueling demands that came with it—as well as his personal struggles with anxiety and addiction after his departure from the band. 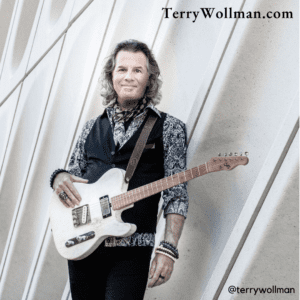 Terry Wollman brings his talent and passion to every recording and performance. Originally from Miami, he moved to Los Angeles after graduating from the prestigious Berklee College of Music with a degree in Arranging and quickly built a solid reputation as an in-demand
music director/guitarist/producer/composer.

From his critically acclaimed solo debut “Bimini”, to his 25 year retrospective album “Silver Collection” and “Cassini’s Last Dance”, Terry weaves his memorable melodies over unique and eclectic arrangements. He is currently in the studio recording his next CD of special collaborations scheduled for release later this year. Terry’s weekly podcast Making It with Terry Wollman explores the secrets, successes and strategies for making it in the music biz.