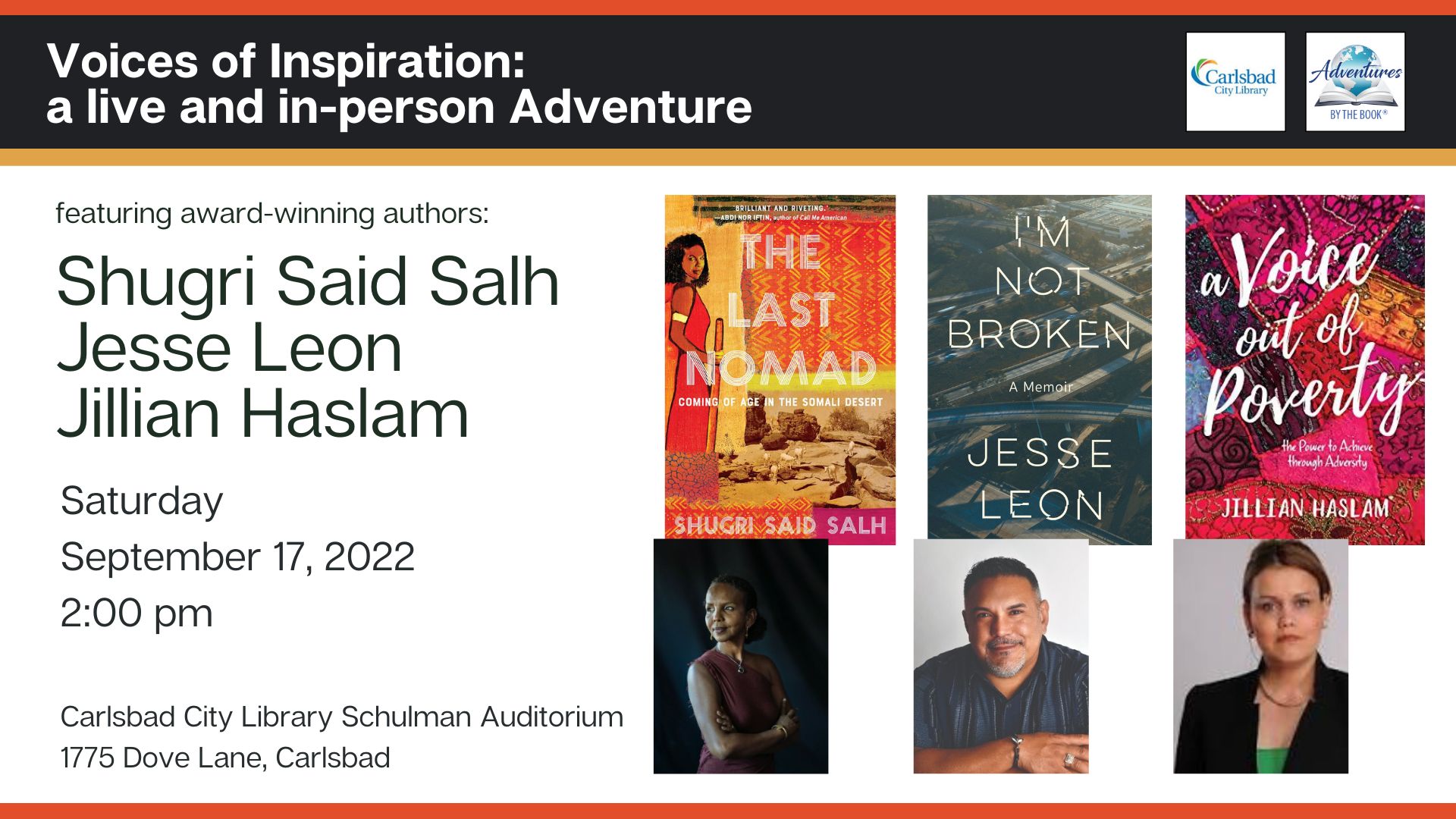 About the Live and In-Person Event

“Out of the mountain of despair, a stone of hope.” – Martin Luther King, Jr.

Prepare to be inspired by Shugri Said Salh, Jesse Leon and Jillian Haslam, whose lives began in despair, but are now award-winning authors of the memoirs that chronicle their extraordinary stories of resilience and survival through their respective memoirs The Last Nomad, I’m Not Broken, and A Voice Out of Poverty.

This event, in partnership with the Carlsbad City Library, is free and open to the public. No registration is required, although paperback copies of The Last Nomad, I’m Not Broken, and A Voice Out of Poverty will be available for purchase and signing at the event or preorder a copy below to be delivered to the event for signing. 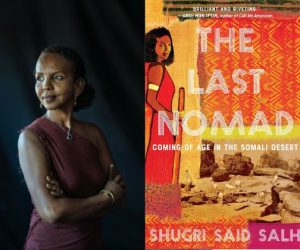 Shugri Salh was born in the desert of Somalia in 1974 and spent her early years living as a nomad. In 1992, she emigrated to North America after the civil war broke out in her home country. She attended nursing school at Pacific Union college and graduated with honors.

Although The Last Nomad is her first book, Shugri has been storytelling since she could talk. From her grandmother and the nomadic community in which she was raised, she heard stories and learned of their power to entertain, teach, and transform. When she isn’t writing or telling stories, she works as an infusion nurse. Shugri Salh lives in Sonoma County with her husband and three children.

The Last  Nomad, winner of the 2022 Gold Nautilus Award, Multicultural & Indigenous Category, is a remarkable and inspiring true story that “stuns with raw beauty” about one woman’s resilience, her courageous journey to America, and her family’s lost way of life.

Born in Somalia, a spare daughter in a large family, Shugri Said Salh was sent at age six to live with her nomadic grandmother in the desert. The last of her family to learn this once-common way of life, Salh found herself chasing warthogs, climbing termite hills, herding goats, and moving constantly in search of water and grazing lands with her nomadic family. For Salh, though the desert was a harsh place threatened by drought, predators, and enemy clans, it also held beauty, innovation, centuries of tradition, and a way for a young Sufi girl to learn courage and independence from a fearless group of relatives. Salh grew to love the freedom of roaming with her animals and the powerful feeling of community found in nomadic rituals and the oral storytelling of her ancestors.

As she came of age, though, both she and her beloved Somalia were forced to confront change, violence, and instability. Salh writes with engaging frankness and a fierce feminism of trying to break free of the patriarchal beliefs of her culture, of her forced female genital mutilation, of the loss of her mother, and of her growing need for independence. Taken from the desert by her strict father and then displaced along with millions of others by the Somali Civil War, Salh fled first to a refugee camp on the Kenyan border and ultimately to North America to learn yet another way of life.

Readers will fall in love with Salh on the page as she tells her inspiring story about leaving Africa, learning English, finding love, and embracing a new horizon for herself and her family. Honest and tender, The Last Nomad is a riveting coming-of-age story of resilience, survival, and the shifting definitions of home. 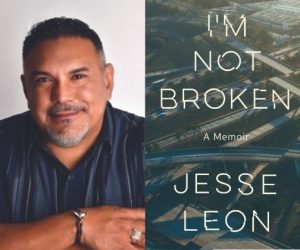 Jesse Leon is a social impact consultant to foundations, impact investors, non-profits, and real estate developers on ways to address issues of substance abuse, affordable housing, and educational opportunities for at-risk youth. Since receiving a master’s degree from the Harvard Kennedy School, Jesse has managed multi-million dollar philanthropic grantmaking for various foundations and banking institutions, managed over $1B in public sector investments for affordable housing, and built thousands of units of mixed-income housing as a real estate developer for Bank of America.

Jesse recently moved back to San Diego to be closer to his mother and to pursue his dream of publishing this book. He is a native Spanish speaker and fluent in English and Portuguese.

Jesse’s unforgettable memoir, I’m Not Broken, is an inspirational portrait of one young man’s indomitable strength and spirit to survive—against all possible odds.

Born to indigenous working-class Mexican immigrants in San Diego in the 1970s, Jesse Leon’s childhood was violently ruptured. A dangerous and harrowing encounter at a local gift shop when he was eleven years old left Jesse with a deadly secret. Hurt, alone, and scared for his life, Jesse numbed his pain by losing himself in the hyper-masculine culture of the streets and wherever else he could find it—in alcohol, drugs, and prostitution. Overlooked by state-sanctioned institutions and systems intended to help victims of abuse, neglected like many other low-income Latinos, Jesse spiraled into cycles of suicide and substance abuse.

I’m Not Broken is the heartbreaking and remarkable story of the journey Jesse takes to win back his life, leading him to the steps of Harvard University. From being the lone young person of color in Narcotics Anonymous meetings to coming to terms with his own sexual identity, to becoming an engaged mentor for incarcerated youth, Jesse finds the will to live with the love and support of his family, friends, and mentors. Recounting the extraordinary circumstances of his life, Jesse offers a powerful, raw testament to the possibilities of self-transformation and self-acceptance. 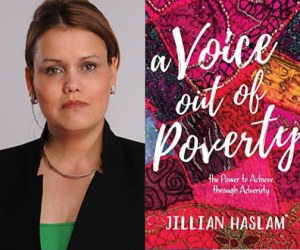 Jillian Haslam was born in 1970 and raised primarily in the slums of Calcutta. Despite the severe devastation of her family’s living circumstances, she completed her education and landed her first major employment as a personal assistant to the CEO at Bank of America in India. In 2011, she published the first version of her memoir, Indian. English, which sold over 150,000 copies, mostly while she was on the speaking circuit. Her story also incited interest from Hollywood and British film directors and producers, leading to the development of a feature film.

Jillian became a speaker in demand and is a Distinguished Toastmaster (DTM). She has delivered several TEDx talks, among other prestigious speaking engagements, on various topics that flow from her life story. Jillian speaks on topics that include entrepreneurialism, the power of the mind, and human resilience. Jillian currently lives in London with her husband.

Jillian’s story, A Voice Out of Poverty, is a woman’s ascent from devastating poverty and childhood trauma to international standing as a prominent advocate for the poor and helpless.

Jillian uses her story and her voice to speak for the poor and powerless in her heart-wrenching memoir which begins in the slums of Calcutta where she and her family are forced to live after British colonization ended.

Haslam first embodied her fierce will to never give up as a young girl, when she stood for hours at a tea shop, begging for a ladle of milk to keep her newborn sister from dying of starvation.

A Voice Out of Poverty leaves the reader asking how someone so young had the tenacity to overcome so much—and then go back to face it all again in a passionate effort to spare others from the suffering that she endured and witnessed all around her growing up.

Winner of the prestigious Mother Theresa International Memorial Award, she has embraced her purpose to become an important driver of global action for the most urgent needs of the underserved in India and the UK, especially during the pandemic.

About the Carlsbad City Library

This event is FREE and open to the public. Registration is not required. Seating is offered on a first-come, first-served basis. Carlsbad City Library provides community members of all ages with convenient access to high-quality resources and services to inform and enrich individual and community life. Carlsbad City Library is the destination for information, enjoyment of reading, lifelong learning, and cultural enrichment for those who live, work and play in Carlsbad.