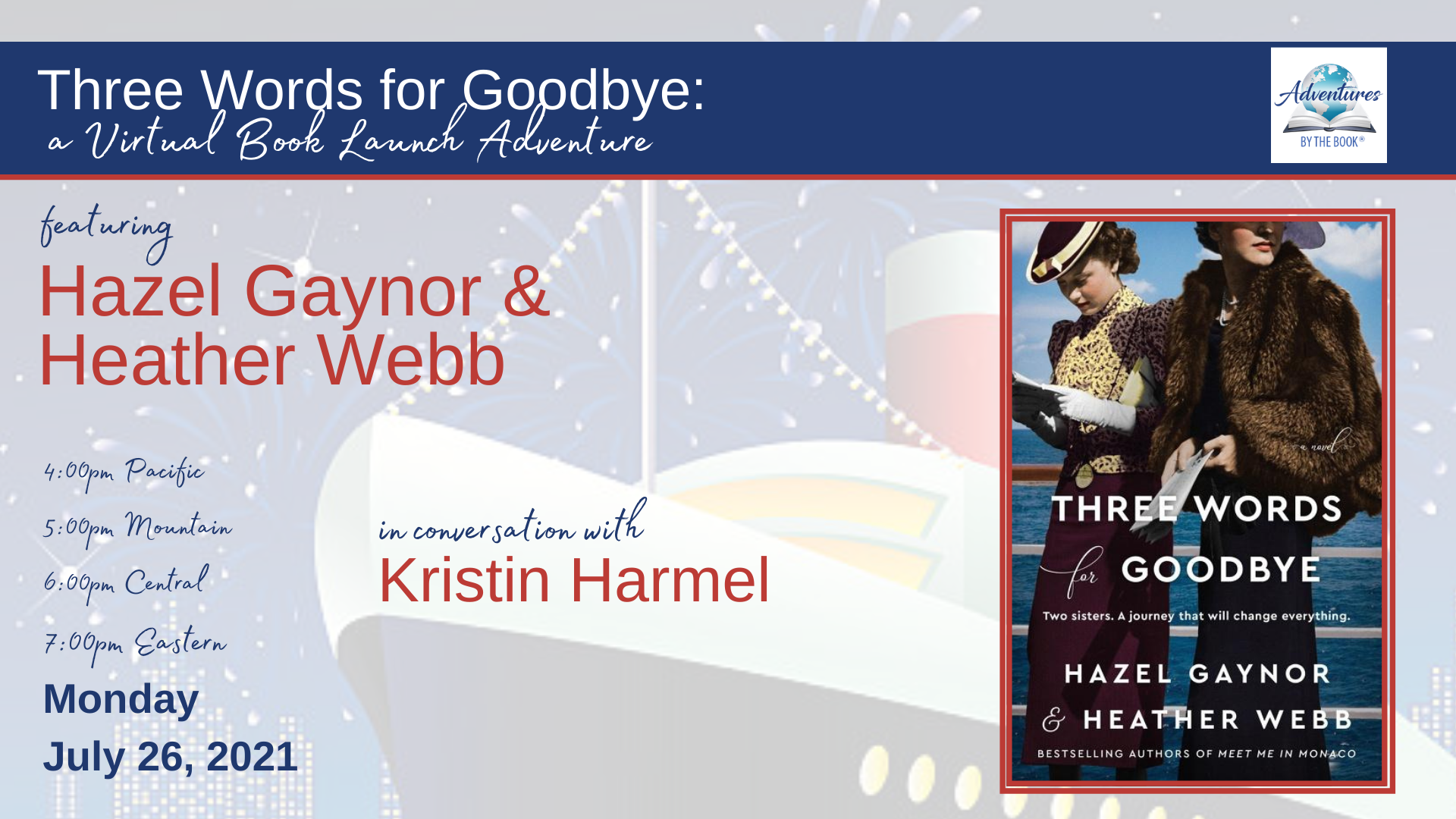 The launch of a book is an exciting venture that authors dream about during the years of writing, editing, rewriting and so often, disappointing and discouraging setbacks that have only been exacerbated since COVID’s cancellation of book tours and events. So when the beautiful finished product is launched into the world of readers, there is big cause to celebrate, and we plan to do just that with New York Times bestselling authors Hazel Gaynor and Heather Webb and their new historical novel, Three Words for Goodbye.

Settle into your jammies with a snuggly blanket and glass of wine, and join Hazel and Heather in discussion with New York Times bestselling author Kristin Harmel about their coming-of-age novel set in pre-WWII Europe . And since this is a special launch night, grab some popcorn and join us immediately following the event for Monday night at the movies as we share a 25 minute video presentation about the launch and history of the RMS Queen Mary featured in Three Words for Goodbye.

Your Adventure includes a paperback copy of Three Words for Goodbye (with signed bookplate), tax, shipping within the U.S., discussion between three bestselling authors, and a special Queen Mary video presentation. Order both Three Words for Goodbye and Kristin’s new book, The Forest of Vanishing Stars, below and receive a special bundled discount. 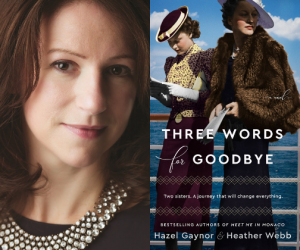 Hazel’s co-written novels with Heather Webb have all been published to critical acclaim. Last Christmas in Paris won the 2018 Women’s Fiction Writers Association Star Award, and Meet Me in Monaco was shortlisted for the 2020 Romantic Novelists’ Association Historical Novel award. Their latest novel, Three Words for Goodbye, will be published in July 2021.

Hazel was selected as a WHSmith Fresh Talent pick and by Library Journal as one of Ten Big Breakout Authors for 2015. Her work has been translated into seventeen languages and is published in twenty-three countries to date. Originally from Yorkshire, England, she now lives in Ireland with her husband and two children.

Heather Webb is the USA Today bestselling and award-winning author of seven historical novels. In 2015, Rodin’s Lover was a Goodread’s Top Pick, and in 2018, Last Christmas in Paris won the Women’s Fiction Writers Association STAR Award. Meet Me in Monaco, was selected as a finalist for the 2020 Goldsboro RNA award in the UK, as well as the 2019 Digital Book World’s Fiction prize. To date, Heather’s books have been translated to over a dozen languages.  She lives in New England with her family and one feisty rabbit.

Heather’s next solo novel, The Next Ship Home, is inspired by true events and reveals the dark secrets of Ellis Island as two unlikely friends challenge a corrupt system, altering their fate and the lives of the immigrants that come after them. It will release in February 2022, from Sourcebooks.

Heather is a professional freelance editor and shares advice at one of her favorite places on the internet, award-winning writing site WriterUnboxed.com. When not writing, she feeds her cookbook addiction and looks for excuses to head to the other side of the world. Heather has also joined forces again with her writing partner, Hazel Gaynor, for a third collaboration, Three Words for Goodbye, featured below

Their new novel, Three Words for Goodbye, is a coming-of-age novel set in pre-WWII Europe, perfect for fans of Jennifer Robson, Beatriz Williams, and Kate Quinn.

Three cities, two sisters, one chance to correct the past . . .

New York, 1937: When estranged sisters Clara and Madeleine Sommers learn their grandmother is dying, they agree to fulfill her last wish: to travel across Europe—together. They are to deliver three letters, in which Violet will say goodbye to those she hasn’t seen since traveling to Europe forty years earlier; a journey inspired by famed reporter, Nellie Bly.

Clara, ever-dutiful, sees the trip as an inconvenient detour before her wedding to millionaire Charles Hancock, but it’s also a chance to embrace her love of art. Budding journalist Madeleine relishes the opportunity to develop her ambitions to report on the growing threat of Hitler’s Nazi party and Mussolini’s control in Italy.

Constantly at odds with each other as they explore the luxurious Queen Mary, the Orient Express, and the sights of Paris and  Venice,, Clara and Madeleine wonder if they can fulfill Violet’s wish, until a shocking truth about their family brings them closer together. But as they reach Vienna to deliver the final letter, old grudges threaten their reconciliation again. As political tensions rise, and Europe feels increasingly volatile, the pair are glad to head home on the Hindenburg, where fate will play its hand in the final stage of their journey. 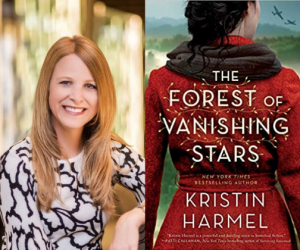 Kristin Harmel is the New York Times bestselling, USA Today bestselling, and #1 international bestselling author of The Book of Lost Names, The Winemaker’s Wife, and a dozen other novels that have been translated into twenty-nine languages and sold all over the world, as well as co-founder and host of the Friends & Fiction podcast.  A former reporter for People magazine, Kristin has been writing professionally since the age of 16, when she began her career as a sportswriter, covering Major League Baseball and NHL hockey for a local magazine in Tampa Bay, Florida in the late 1990s.

After stints covering health and lifestyle for American Baby, Men’s Health, and Woman’s Day, she became a reporter for People magazine while still in college and spent more than a decade working for the publication, covering everything from the Super Bowl to high-profile murders to celebrity interviews. Her favorite stories at People, however, were the “Heroes Among Us” features—tales of ordinary people doing extraordinary things.

In her new novel, The Forest of Vanishing Stars, Kristin returns returns with an evocative coming-of-age World War II story about a young woman who uses her knowledge of the wilderness to help Jewish refugees escape the Nazis—until a secret from her past threatens everything.