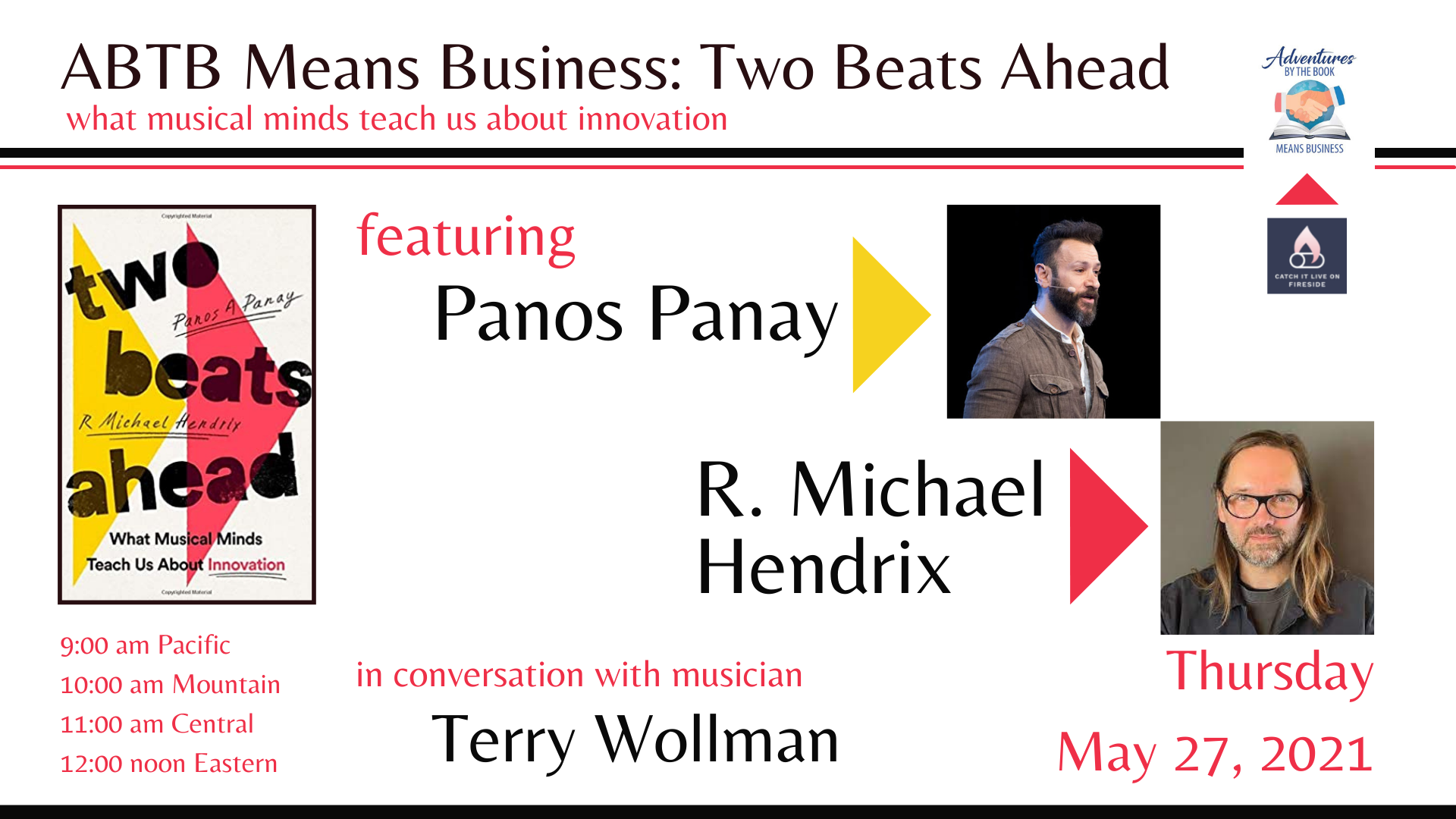 For over ten years, Adventures by the Book has been offering our signature one-of-a-kind, multi-sensorial events and travels with authors. That’s because when it comes to connecting people and communities with books, we mean business! And now, we are taking that mission quite literally and are thrilled to welcome you to join the launch of our new series, Adventures by the Book Means Business, offering you the opportunity to meet some of the greatest minds in the business world.

And we can’t think of a better way to launch our new Adventures by the Book Means Business series than with Panos Panay, the Senior Vice President for Global Strategy and Innovation at Berklee College of Music, and R. Michael Hendrix, Partner and Global Design Director at IDEO,  as they discuss their new book, Two Beats Ahead: What Musical Minds Teach Us About Innovation, in conversation with Terry Wollman, musical legend and host of the popular podcast, Making It.

Join us on Fireside where you can chat live* with the authors to discuss their new book, ask questions, and converse with them live “on stage.” Find out what the musical mind can teach us about innovation, culling interviews from some of the top creative geniuses of our time.

Your Adventure includes a paperback copy of Two Beats Ahead(with signed bookplate), tax, shipping within the U.S. and Canada, a live Fireside discussion with Panos and R. Michael, in conversation with Terry, Q&A, and the unique opportunity to converse live* with these brilliant creative artists and innovators.

*Admission to this event is unique, as Fireside is open by invite only. Simply purchase a book below and we will send you a private VIP link to attend the virtual event. An iPhone or iPad is required to chat live with the authors on the virtual stage; however, event is accessible via live broadcast on all devices. Event access is provided via instructions emailed to you three days prior to the event.

About the Authors and Book 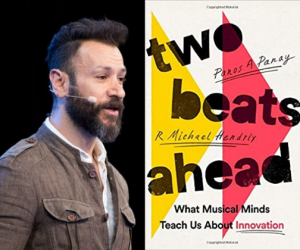 Panos Panay is is the Senior Vice President for Global Strategy and Innovation at Berklee College of Music, the founder of the Berklee Institute for Creative Entrepreneurship (BerkleeICE) and a fellow at MIT Connection Science. He is also the founder of Sonicbids, a leading platform for bands to book gigs and market themselves online, as well as co-founder of the Open Music Initiative.

He has spearheaded multi-disciplinary collaborations between Berklee and MIT; the design firm IDEO; and Brown University. Panay has been named to Fast Company‘s “Fast 50” list, IncMagazine‘s “Inc 500,” and named as one of Boston Globe‘s “Game Changers” among other awards and honors. He has spoken about the future of the music industry on programs such as CNBC’s Squawk Box, at events such as the World Economic Forum at Davos, Switzerland and has delivered keynote addresses at events and universities around the world.

R. Michael Hendrix is is a Partner and the Global Design Director at design and innovation consultancy IDEO, where he has worked on everything from home 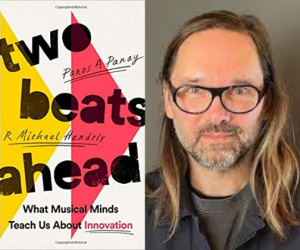 goods to homeland security. His illustrious 25+ year career has made him a sought after speaker delivering keynotes at Fast Company, WIRED, SXSW, AIGA, FUSE, HOW, Design Management Institute, Sonar Plus and Moogfest. Michael is also an Assistant Professor of Music Business/Management at Berklee College of Music and a regular guest lecturer universities across the globe. Under his moniker R.M.Hendrix, Michael has released a half dozen recordings of critically acclaimed experimental, noise pop.

Their new book, Two Beats Ahead, is the product of their own creative collision between the worlds of music and business. The two were first drawn to each other by their mutual love of music and their common start-up backgrounds that succeeded in part by challenging orthodoxies in their respective industries.

Two Beats Ahead is both an entrepreneurship guide for creatives and a creativity crash-course for entrepreneurs and business professionals. Whether you’re coming to this book as an artist or an executive – or a creative spirit of any stripe – we’ll hope you’ll find new inspiration and perspectives in these pages. As we go through this journey, challenge yourself to see how you can apply these creative headspaces onto whatever you do, whether it’s shaping your own career, starting an enterprise, or bringing greater creativity into your current role or team. 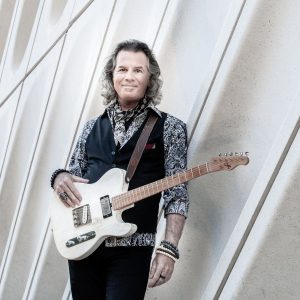 Guitarist/Producer/Arranger Terry Wollman brings his talent and passion to every recording and performance. Terry has performed with an array of artists including Dionne Warwick, Little Richard, Wilson Phillips, Melissa Manchester, Al Jarreau, Joan Baez, Joe Walsh, Keb’ Mo’, and Michael McDonald, to name a few. He has numerous TV credits including his stints as musical director of 2 national late night talk shows.

Most recently, he was the Music Producer for the acclaimed HBO documentary, If You’re Not in the Obit, Eat Breakfast, narrated by Carl Reiner, featuring Tony Bennett, Mel Brooks, and Dick Van Dyke. From his critically acclaimed debut “Bimini”, to his 25 year retrospective album “Silver Collection”, Terry weaves his memorable melodies over unique and eclectic arrangements. His latest album is “Cassini’s Last Dance.” Terry’s weekly podcast, “Making It with Terry Wollman” explores the secrets, successes and strategies for making it in the music biz.

We are thrilled to announce that Adventures by the Book has been invited to host a literary series on Fireside which will include book discussions, author talks, book clubs, special presentations, and much more.

During the course of WWII, President Franklin Delano Roosevelt instituted a series of “fireside chats” on the radio, as a way to regularly communicate self-assurance and calm during times of despair and uncertainty in our country. While once a thing of the past, thanks to the brilliant collaboration of billionaire entrepreneur and Shark Tank TV star, Mark Cuban, and Falon Fatemi, former CEO and Founder of Node.ai, Fireside chats are back, bigger and better than ever, and in a technological format that allows YOU to actively participate!

Fireside is the exclusive, invite-only new podcast platform for the next generation – a socially responsible space for us to come together in real-time to collaborate and create meaningful conversations. Together, we will engage in discussion, debate, and discourse in a public forum and make it a thing of celebration and beauty. We are ready to share our microphone with you and hope you’ll join us as we collaborate in the world’s most dynamic auditorium.