Moroccan Adventure by the Book 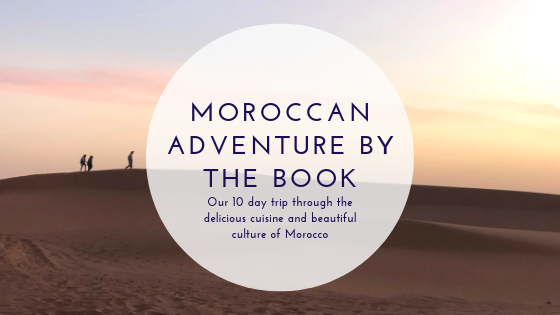 Dear Adventurers
“A banquet of Moroccan memories.” That’s what Kitty Morse, Moroccan-born chef and author promises readers in the subtitle of her memoir Mint Tea and Minarets, which recreates her tantalizing, albeit painstaking, journey to transfer ownership of Dar Zitoun, her beloved father’s
ancient Moorish riad, upon his death 25 years ago.

Our own journey to Morocco started about five years ago, when I heard Kitty speak at a book signing event in San Diego after having just returned from yet another trek across the globe in continuation of her fifteen-year journey wading through an ancient Byzantine legal system that would eventually grant her and her brothers ownership of Dar Zitoun.

I had always been in awe of this petite septuagenarian for her exuberance, adventurous spirit, and knowledge of Moroccan culture and cuisine, but until that moment, I hadn’t realized how easily her crooked smile could lure you in and leave you begging for one of her homemade tagines or, as I was soon wanting, a trip to Morocco with her as our personal guide.

Never one too proud to beg, I began a five-year quest to ultimately convince Kitty to head back to the land of Mint Tea and Minarets, with readers in tow. Luck was on our side, as the 25th anniversary of her father’s passing, and her newfound desire to sell Dar Zitoun, gave her reason
to acquiesce and halt my shameless begging.

Last month, 20 Adventurers accompanied Kitty and Adventures by the Book® on a ten-day cultural excursion, beginning in Fez with a decadent welcome luncheon at Chateau Roslane Winery, and culminating with a farewell tea at Kitty’s beloved Dar Zitoun in Azemmour, about an hour outside of Casablanca, complete with local musicians, enticing Moroccan finger food, signature mint tea, and a local henna painter.

In ten days, Morocco unveiled itself exactly as Kitty had promised: a banquet indeed, comprised of camel rides in the sand dunes at sunset, a seafood feast in scenic Essaouira that was so fresh, some of the appetizers were still moving, stunning drives over the Atlas Mountains, visits to
historic sites like the UNESCO Kasbah of Ait Ben Haddou, Marrakech souks, the Roman ruins of Volubis, the Todra Gorges, various women’s coops where they sell local products made from roses, argan trees, intricate carpets and embroidered scarves and linens.

As we feasted every day on authentic Moroccan cuisine, including Kitty’s favorite couscous, prepared a myriad ways and infused with local spices like saffron, we learned about Kitty’s life growing up in Morocco with a British military father and French mother. We met some of her friends and neighbors, and were mesmerized by the tales of growing up in North Africa an hour away from the banks of the Mother of Spring River where her father would later begin his lifelong restoration of a once crumbling Dar Zitoun.
I was honored to share with Kitty a very special and private moment at the Yves St. Laurent garden and museum where she honored her father, exactly twenty-five years after his passing. Her parents would be proud to know she has not only preserved their banquet of Moroccan memories, but she has shared these delicious stories through her writing, and none who have read them, including this reader, will ever leave her table unnourished.