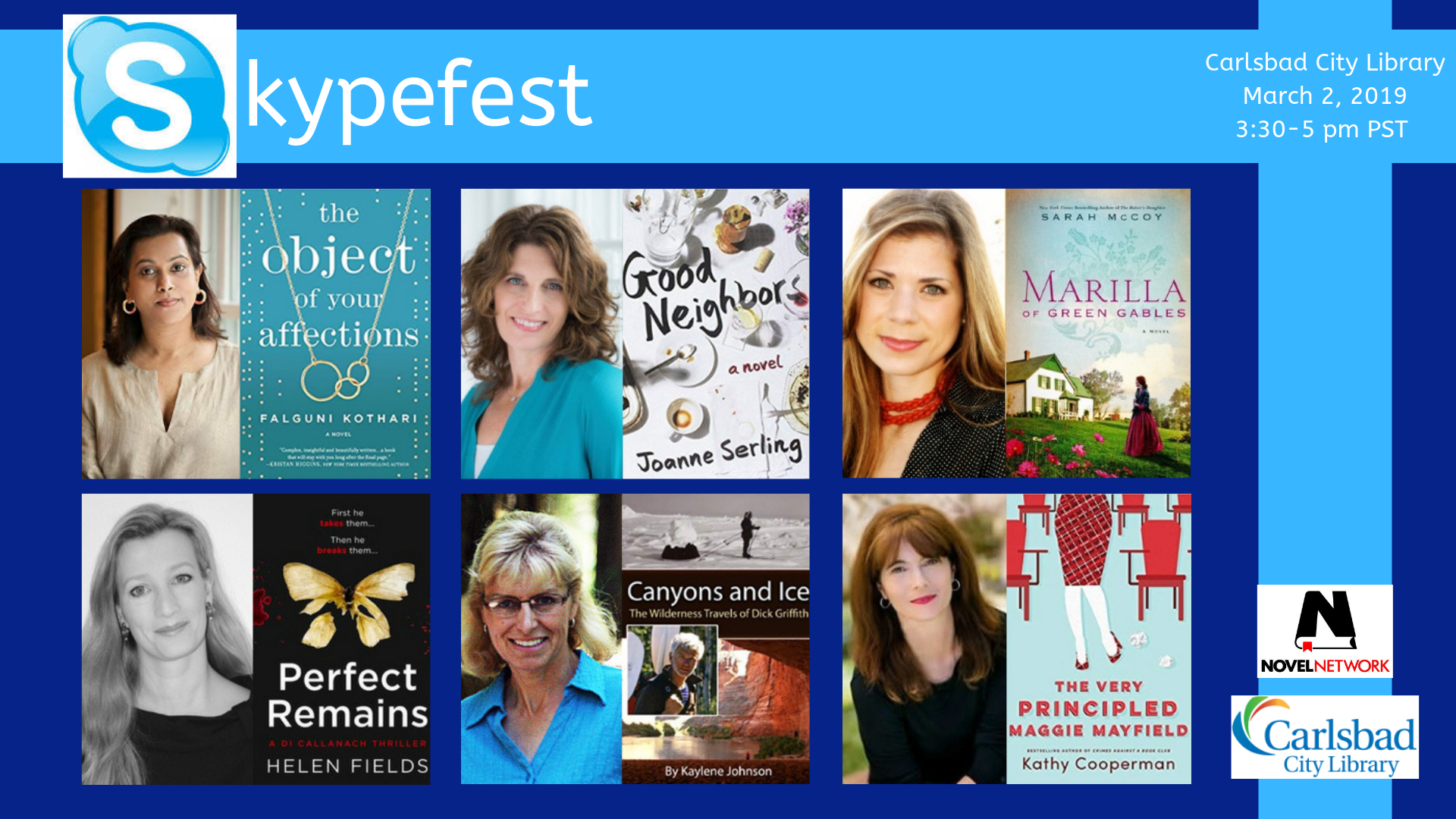 in partnership with NovelNetwork and The Carlsbad City Library

What is NovelNetworkSkypefest? Simply put, it’s an author event in which authors chat with readers and book clubs via Skype. The Carlsbad Library does all the work of setting up their big projection screen and scheduling the Skype visits, NovelNetwork provides the authors, and all you have to do is come join us for a fun, free afternoon. And you don’t even have to read the book ahead of time to join in, but of course, it’s always fun if you have the opportunity to do so!

Each author will present via Skype, one at a time, after which you have the opportunity to chat with them or ask questions. Learn more about the authors and their books, and if you have a book club, why not join NovelNetwork (it’s free!) and schedule a visit with any (or all!) of these authors via Skype, or even in person for the local authors.

This event is free to the public. However, books MUST BE RESERVED BELOW for delivery at the event.

Book Clubs Can Connect with These Fabulous Authors Now!

Our Skypefest authors are just a small representation of the over 70 book club favorite authors who are NovelNetwork members! Through this innovative new program, you and your book club can schedule a meeting with authors, in person or via video chat, in preparation for this exciting event or if you are unable to attend the event!

Or, maybe you’ll remember questions after the event that you forgot to ask and need to connect with them to tie up all those loose ends! All this is possible through NovelNetwork™! Click Here for more information and to sign up (it’s FREE for book clubs to register)!

NovelNetwork is a global space dedicated to connecting authors with avid readers, an expanded professional network, and published peers.  NovelNetwork was created to help authors find more innovative ways to connect with readers and promote their books to wider audiences.

Kathy Cooperman spent four years performing improvisational comedy, then decided to do something less fun with her life. After graduating from Yale Law School, she went into criminal law, defending “innocent” (rich) clients.

These days, she lives in Del Mar, California, with her husband and four challenging young children. Crimes Against a Book Club is her first novel.

Schedule a visit with Kathy on NovelNetwork now!

Helen Fields’ first love was drama and music. From a very young

age she spent all her free time acting and singing until law captured her attention as a career path. She studied law at the University of East Angelia, then went on to the Inns of Court School of Law in London.

Helen self-published two fantasy books as a way of testing herself and her writing abilities. She enjoyed the creative process so much that she began writing in a much more disciplined way, and decided to move into the traditional publishing arena through an agent.

Perfect Remains is set in Scotland, where Helen feels most at one with the world. Edinburgh and San Francisco are her two favorite cities, and she travels whenever she can.

Schedule a visit with Helen on NovelNetwork now!

Eagle River. She has found adventure on Mt. McKinley, the Chugach Mountains and as a wrangler and cook in the Brooks Range. Her award winning articles have appeared in Alaska magazine, the Los Angeles Times, the Louisville Review and other publications.

Her books include: Our Perfect Wild: Ray & Barbara Bane’s Journeys and the Fate of the Far North; Canyons and Ice, The Wilderness Travels of Dick Griffith; A Tender Distance: Adventures Raising My Sons in Alaska; Portrait of the Alaskan Railroad; and Trails Across Time: History of an Alaskan Mountain Corridor.

She holds a BA from Vermont College and an MFA in Writing from Spalding University in Louisville, Kentucky. Her book, Canyons and Ice, was turned into a documentary film released this past year by Alaska Public Media, soon to be released nationally.

Schedule a visit with Kaylene on NovelNetwork now!

Falguni Kothari was born in Mumbai, married young, has her children young, before her family moved to New York in the Spring of 2001. If anyone had asked her what she wanted to be when she grows up, she’d never in a million years have said “an author.” She abhorred writing… at least, the school version of it. But, she loved stories.

One of her fondest memories is of her grandmother and her masseuse telling her stories of her Gujarati heritage and mythic India. Anecdotes about gods and demons, heroes and epic battles were all too common a debate to wake to most mornings. Needless to say, those stories made an impression on her. And now that she’s accidentally fallen down the writer’s rabbit hole, those are the stories she wants to tell: the forever kind.

Schedule a visit with Falguni on NovelNetwork now!

Sarah’s work has been featured in Real Simple, The Millions, Your Health Monthly, Huffington Post and other publications. She has taught English writing at Old Dominion University and at the University of Texas at El Paso.

The daughter of an Army officer, her family was stationed in Germany during her childhood. She grew up in Virginia and now lives with her husband, an orthopedic sports surgeon, and their dog, Gilbert, in Winston-Salem, North Carolina.

Schedule a visit with Sarah on NovelNetwork now!

was published by Twelve/Grand Central publishing in February 2018. Her fiction has been nominated for a Pushcart Prize and has appeared in New Ohio Review and North American Review.

She is a graduate of Cornell University and studied and taught fiction at The Writers Studio in New York City. Previously, she worked in women’s magazines, high tech public relations and as Director of Public Affairs for American Express.

She currently lives in New Jersey with her husband and children and is at work on her second book.

Schedule a visit with Joanne on NovelNetwork now!