Ordinary Heroes: A Virtual Adventure by the Book 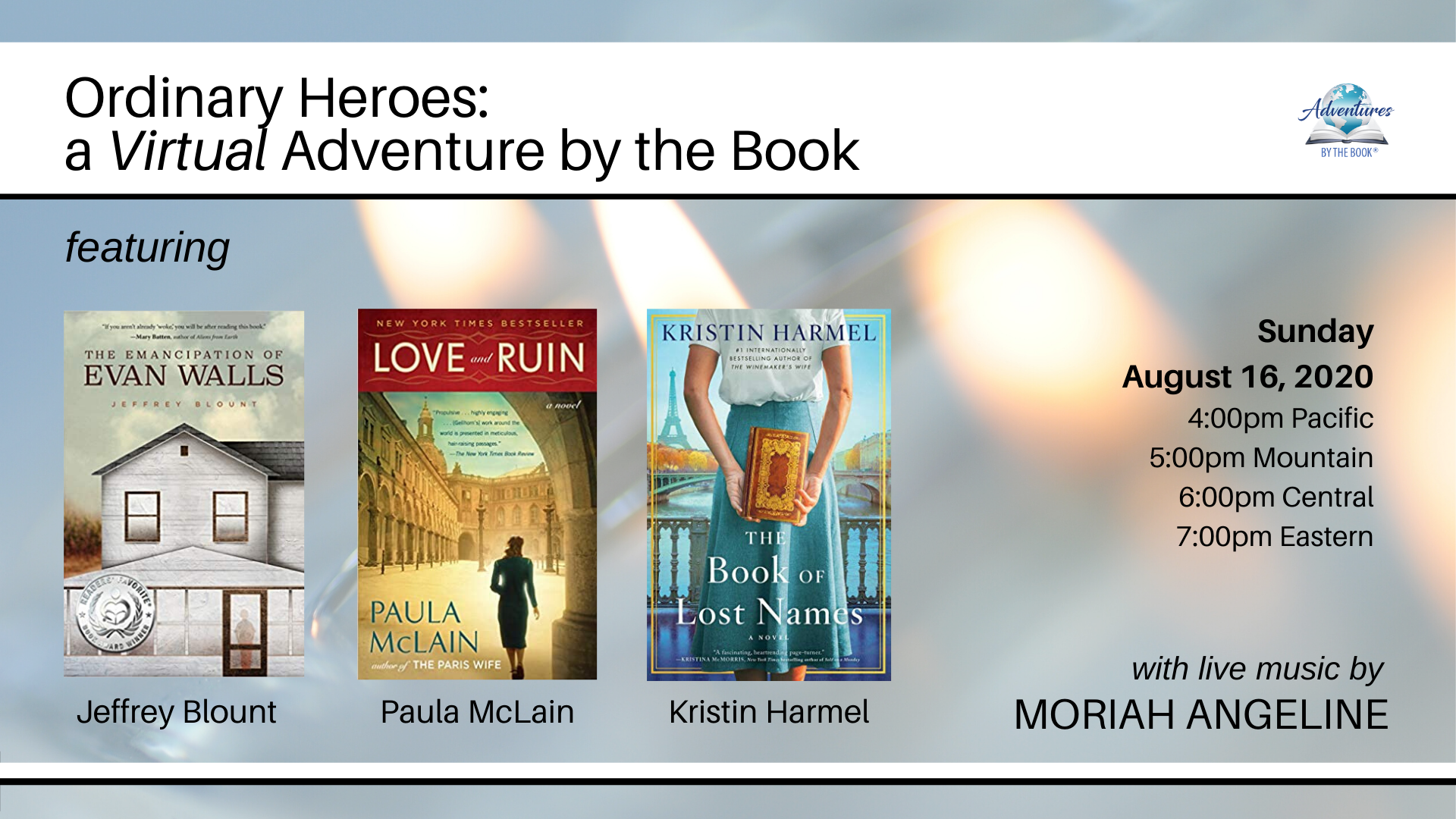 As you relax in the comfort of your own home, allow our three authors to share their inspiring stories of everyday, ordinary people, who become heroes when circumstances compel them to act. Learn about their new books just in time to add to your summer reading list, and then sit back, relax, and enjoy a 15-20 minute mini-concert of hero-inspired songs by Moriah Angeline.

This Virtual Adventure was designed not only to support four creative artists whose book tours and events were cancelled due to COVID-19, but also to provide readers with our signature Adventures by the Book® multi-sensorial experience that brings literature to life in exciting and unique ways. Event admission is included with your purchase of any of the authors’ books, or purchase all three, and receive a special bundled discount.

Your Adventure includes your choice of any of the authors’ books, shipping within the US, signed bookplate(s), a virtual book discussion with three bestselling authors, and a 15-20 minute mini-concert.

*Instructions to join the Zoom virtual Adventure will be emailed to you three days prior to the event. Please note that no technical assistance will be available during the event, so we highly recommend you practice using Zoom with friends and family prior to the event. If you do not receive your Zoom invite, please contact us. 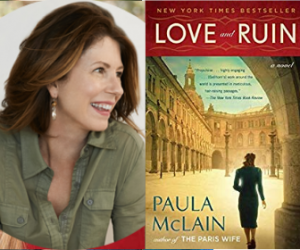 Paula McLain is the author of The Paris Wife, a New York Times and international bestseller, which has been published in thirty-four languages, as well as New York Times bestsellers CIrcling the Sun and Love and Ruin.The recipient of fellowships from Yaddo, The MacDowell Colony, the Cleveland Arts Prize, the Ohio Arts Council and the National Endowment for the Arts, she is also the author of two collections of poetry; a memoir, Like Family, Growing Up in Other People’s House; and a first novel, A Ticket to Ride.

Paula was born in Fresno, California in 1965. After being abandoned by both parents, she and her two sisters became wards of the California Court System, moving in and out of various foster homes for the next fourteen years. When she aged out of the system, she supported herself by working as a nurses aid in a convalescent hospital, a pizza delivery girl, an auto-plant worker, a cocktail waitress–before discovering she could (and very much wanted to) write. She received her MFA in poetry from the University of Michigan in 1996.

Her newest book, Love and Ruin (Ballantine Books), named one of the best books of the year by The Washington Post, brings to life the story of Martha Gellhorn – a fiercely independent, ambitious woman ahead of her time, who would become one of the greatest war correspondents of the twentieth century. In 1937, 28-year-old Martha Gellhorn travels alone to Madrid to report on the atrocities of the Spanish Civil War and becomes drawn to the stories of ordinary people caught in the devastating conflict. It’s her chance to prove herself a worthy journalist in a field dominated by men, but after she falls in love with Ernest Hemingway, they are no longer equals, and Martha must forge a path as her own woman and writer 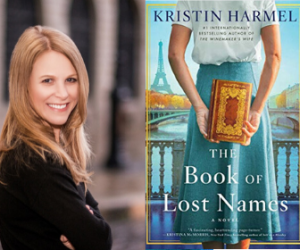 Kristin Harmel is the #1 international bestselling and USA Today bestselling author of The Winemaker’s Wife, The Room on Rue Amelie, and a dozen other novels that have been translated into numerous languages and sold all over the world

A former reporter for PEOPLE magazine, Kristin spent more than a decade working for the publication, covering everything from the Super Bowl to high-profile murders to celebrity interviews with the likes of Ben Affleck, Matthew McConaughey, OutKast, Justin Timberlake, and Patrick Dempsey. Her favorite stories at PEOPLE, however, were the “Heroes Among Us” features—tales of ordinary people doing extraordinary things, including one of those features—the story of Holocaust-survivor-turned-philanthropist Henri Landwirth (whom both Walter Cronkite and John Glenn told Kristin was the most amazing person they’d ever known).

Her most recent book, The Book of Lost Names, was inspired by an astonishing true story from World War II. In this unforgettable historical novel, a young woman with a talent for forgery helps hundreds of Jewish children flee the Nazis. An engaging and evocative novel reminiscent of The Lost Girls of Paris and The Alice Network, The Book of Lost Names is a testament to the resilience of the human spirit and the power of bravery and love in the face of evil. 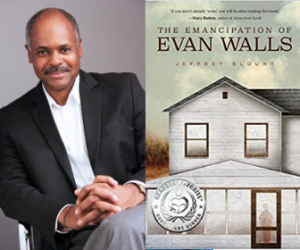 He is also an Emmy award-winning television director and a 2016 inductee to the Virginia Communications Hall of Fame, as well as an award-winning documentary scriptwriter for films and interactives that are now on display in the Smithsonian Museum of African American History and Culture.  During a 34-year career at NBC News, Jeffrey directed a decade of Meet The Press, The Today Show, NBC Nightly News, and major special events. He was a contributor for HuffPost and has been published in The Washington Post, The Grio.com and other publications, commenting on issues of race, social justice and writing.

The Emancipation of Evan Walls is the heartwrenching story of a gifted, but ordinary boy growing up in the 1968 Civil Rights era who at age ten makes a startling declaration to his family. From that moment on, the central question of his life is born. Is he black enough? His dream will turn the sleepy town of Canaan upside down, forcing him to walk the slippery and angry slope between blacks and whites, and imparting a heroic message for those who risk the wrath of their own loved ones and community to dream big.

Moriah Angeline is a San Diego native who lived and adventured in New York City for 7-1/2 years where she performed at Soul Night in Toshi’s Living Room and produced three shows at the Duplex Cabaret Theater, including a show lauded by Ed Asner.. She has performed diverse roles in San Diego such as Rizzo in Grease, Peter in Peter Pan, Martha in 1776, and the white girl with soul in It Ain’t Nothing But the Blues. She spent a year in Las Vegas as Sophie in Mamma Mia, did a stint in New Mexico as Lucy in Jekyll and Hyde, and enjoyed a summer in Portland playing her favorite rock icon, Janis Joplin.​ 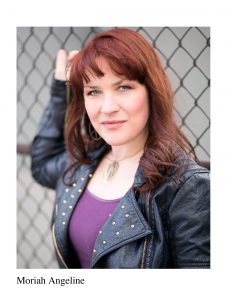 Moriah grew up in a music-loving family, and some of her main musical influences as a child were Janis, Jimi Hendrix, Etta James, Joni Mitchell, Aretha Franklin, and Otis Redding. As she grew up, she found herself inspired by strong female singers like Alanis Morrisette, Fiona Apple, Amy Winehouse, and Pink. When she was introduced to musical theater, she was fascinated by characters with grit, abandon, vulnerability, and sass, and is drawn to roles like Sally Bowles, Elphaba, Rizzo, Eponine, Lucy, Eva Peron, and Peter Pan.​